This City Has a Sound 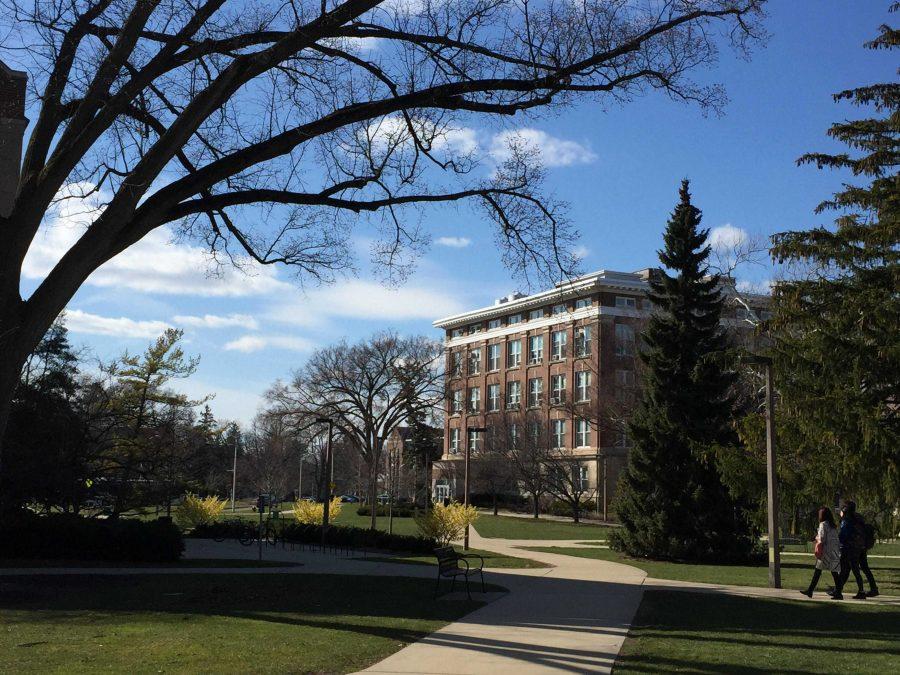 On a crisp, sunny October Saturday, this city has a sound.

As the sun rises, pom poms become tambourines – children, running across sun-drenched grass, shake them like percussionists. And grills become xylophones, spatulas flipping each burger or hot dog like the mallet hitting the wooden board.

A south campus freshman can hear the marching band practicing, or the football announcers testing out the speakers.

To the north, parents and alumni garbed in green toss beanbags and eat appetizers in parking lots, and they can hear the fight song playing all around them.

Beyond campus, the noise of revving car engines, cracked beer cans and country music rise into the air.

And in the middle of campus, a game is played between the boys in green and white and a team of different colors.

A crowd roars, a player tackles another, a football flies, a coach yells and an announcer promotes a sponsor. These are the way things are.

These sounds make a song.

It’s not one with recognizable words maybe, but a recognizable song all the same. Every Spartan can hear it when the sun rises on a home game Saturday.

This city has a voice.

Spartans use it as a force for good. Take Lacey Holsworth, the 8-year-old girl –befriended by basketball star Adreian Payne – who died of cancer in 2014. Students painted the Rock and held a vigil for Holsworth, guarding the Rock for a week to prevent it from being painted over.

Throughout the year, students flock to paint that rock in the field of green for causes near and far: cancer, the Armenian genocide, sexual assault and on-campus racism among them.

This city has an energy.

The cyclotron built beneath campus serves as a symbol both literally and figuratively for that energy.

As the school upgrades that facility, so too does it upgrade its abilities to teach and for students to learn.

Then there is the shark. Or the space station. Or the home of Lex Luthor – whichever you prefer.

The Eli and Edythe Broad Museum may have seemed like an eyesore four years ago, but as time has passed, the museum has become an above ground beacon of innovation and discovery just like the cyclotron below.

An energy consumes those in this city. There is passion here, for things not yet written, not yet learned and not yet discovered.

Dr. Mona Hanna-Attisha’s research extended beyond this city. In exposing what many did not want to see in Flint, she became a hero both home and away.

This city has an aura.

On the first snowfall, the aura can be felt. Where others in towns unlike this one shelter themselves in their homes, this city comes alive. Students are children again – snowballs fly through the air and fortresses arise. At night when the bright street lights illuminate the snow, the city feels like a playground.

Of course, snow is snow. And sooner or later, the joy turns to gloom. The aura is still alive, only quieter.

Sooner or later though, that aura can be felt again. The sun rises, the birds chirp, the snow melts and the aura is stronger than ever before.

On a random Tuesday in June though, the silence is deafening – a city of people migrated away for a summer.

But the aura is strong. Those still there carry that aura close.

But this city is not perfect.

Eight students died in this 2015-2016 school year. Eight too many, certainly when some of them could have been avoided. There is work to be done.

Lack of response and awareness to on-campus sexual assault continues to plague this school. There is work to be done.

This city has a present.

Four years seems like a long time at the outset. Four years to make friends, get a degree, get your life in order, find a job… and the list goes on.

Four years is a long time too. College is the only time in most people’s lives that they can live, work and learn in the same city as thousands of people their age.

In some ways, it’s a fantasy to expect it to go on forever. Then again, that might be why it is so hard to leave.

In the present – these final few weeks of a semester – the sound, the energy and the aura of the city are at their most raucous.

As flowers bloom along Farm Lane, a summer slowness is nearing on the city. But for now, the sound is boisterous.

This city has a future.

For those graduating, it may not seem that way.

When we depart places for a new destination, we expect the place we left to remain as it was – a ship in a bottle of a time long past.

But this city will go on.

New players will join the football team. New stores and restaurants will open their doors. Restaurants here now will close. Those returning for another year will soon enough graduate just the same. It’s a cycle of faces, and a cycle of places.

Though, not all will change.

The city will always be green. Come back 20 years from now, and you will more likely than not still find beautiful trees in West Circle, a tower in the middle and bells chiming the same songs.

There will always be the river. Come back 20 years from now, and you will more likely than not still find ducks splashing in the water in the spring and a frozen shortcut to class in the winter.

And there will always be the fight song. Come back 20 years from now, and you will more likely than not still hear the sound of Spartans young and old singing “Victory for MSU” as they walk throughout campus on a crisp, sunny October Saturday.