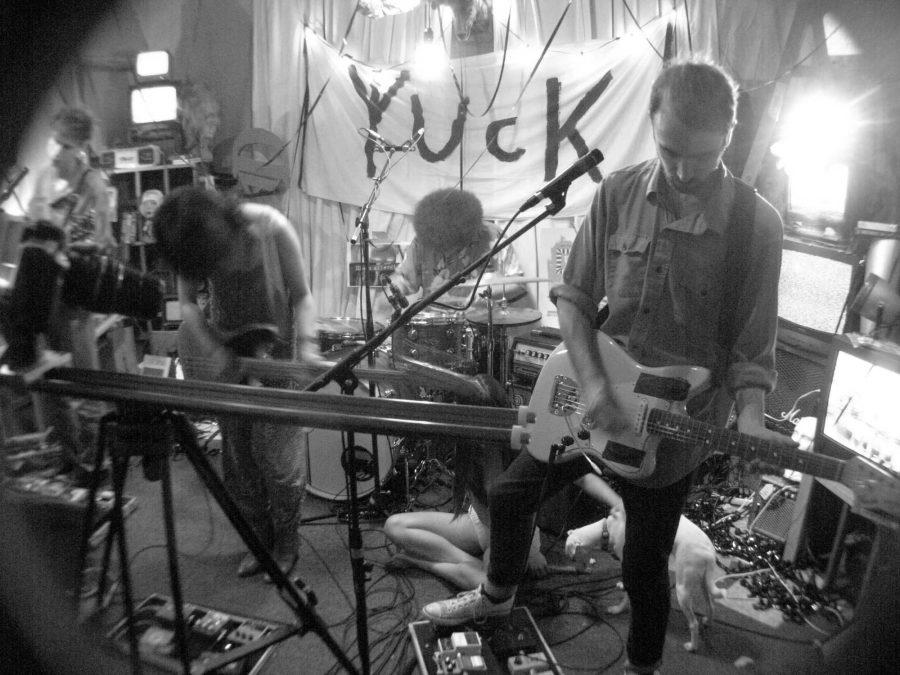 Despite the minuscule crowd, Adrianne Lenker of Big Thief filled the venue with her voice, as they performed songs from their upcoming album, Masterpiece, set to drop May 27th. Skipping the flashy stage effects, the Brooklyn-bred band kept the set simple, having the crowd focus totally on Lenker. To keep the tiny, but present, crowd on their toes, Lenker switched things up- thrashing and screaming to one song, while crooning on at the mic stand the next. Regardless of her broken arm, Lenker and the rest of the band did their duty and primed the small crowd for the main act.

Once the clock struck 10, the members of Yuck made their way from the bar to the stage, announcing along the way, “We’re performing now so come gather around! Everyone in this venue make your way to the stage because we’re going to start.” With no further introduction, the band took their places and opened with a single from Stranger Things, “Cannonball.”

The set continued on, only pausing for singer, Max Bloom, to check in with the crowd once or twice. Most of the show was quick and business-like, save for Bloom’s few interactions with the crowd which helped make the mood more friendly. Rather than thrashing and moshing to the more edgy songs, the crowd stuck with the calm and familiar vibe that the band was putting out, sticking mostly to solitary head-banging and light swaying. The 50-ish person audience gathered around the stage in groups of twos and threes, keeping things warm and intimate.

After closing with “Hold Me Closer”, another single from their new release, the band retreated behind the curtain and made their “exit”, which was short-lived. The public spoke, erupting in a series of cheers and clapping, announcing to the band that they weren’t ready for the night to end.

The band let this continue for a minute before they, unsurprisingly, returned to the stage to perform their encores. Closing the set with “I’m OK” from Stranger Things, and “Operation” from the first, self-titled LP that was produced 2011, Yuck put on a show that was anything but.

Setlist:
Cannonball
Holding Out
Hearts in Motion
Lose My Breath
Get Away
As I Walk Away
Middle Sea
Stranger Things
The Wall
Hold Me Closer
Encore:
I’m OK
Operation