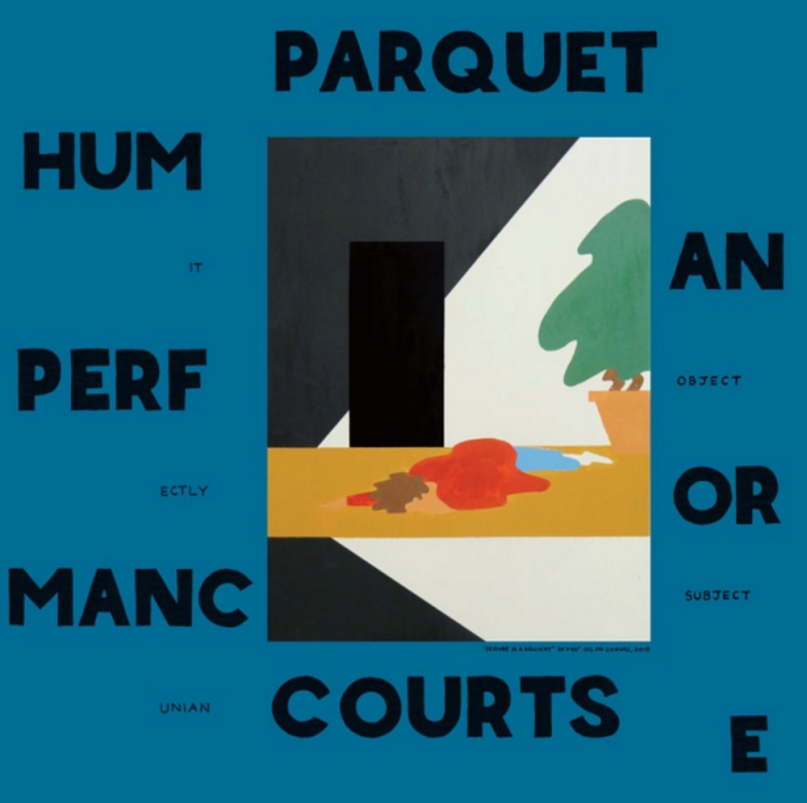 There’s nothing apologetic or token about Parquet Courts. There’s a self aware volition to their works that shouldn’t be scoffed off as light experimentation. To do so would take away from the calculated and methodical direction that their new material takes — not something banged out in the stroke of luck for just doing your own thing.

Monastic Living, their latest release at the end of  November last year, would not seem to be the direct pointer towards the sounds of Human Performance. It was a mini LP that disappointed fans for being simplistic and grinding out the cues of punk familiarity into monotone foundations. A hard listen and only background noise to what’s at the forefront of the band’s capability. Fortunately, this was all in the turn of April Fool’s schemes.

The most punk thing to do is disavow the monastic teachings of punk to only follow these cliches and repetitive head nodding submissiveness. To be stripped of these grating cycles of expected punk “kilter,” Parquet Courts could really explore a raw feel of metaphorically walking the tightrope, Human Performance, out of safety and what’s familiar into trekking new rugged wastelands.

With many bands I have to give a preface for vocal content, saying to listen for the energy  they deliver and it might be a bit abrasive. I often compare the singers to Protomartyr in songs like “Why Does it Shake?” where droning deadpan can still be a sound to keep you tilted for more. However, Parquet Courts might’ve practiced a little on the melodious charming side of singing. While there’s still the same favorite allure of jumping into vocal cord stretching yells, many songs have the solace of being more easy and accessible (which is totally fine). There’s much more growth in not falling so easily back to punk rhythms, and you can hear thought behind every coordinated vocal harmony.

The story starts with the single “Dust,” a space setter to ease the audience into a repetitive lull, incorporating many of the monastic teachings of punk, but given the right chance to blast the horns and bass guitar in your car, there’s a peel back quality to every layer of sound. The album in its entirety has great mixing, and “Dust” more or less, clears away the cobwebs to dig for the many buried themes within the album. It has its interesting assortment of nature sounds, tribal bongos, car traffic and plinking piano that can escape the listener, but are a certain precursor to Parquet Courts’ ready acceptance of newer techniques and effects that only rise as the album progresses.

The title-track of the album, “Human Performance,” has to stand as my favorite — while still vying for the title amongst many great deeper cuts — for being a confident statement for vocal’s sake as previously mentioned, but I’m a sucker for the underlying feedback and ravishing reverb. In possessing such a powerful chorus followed by electronic woodwind and truly feeling the entirety of western jangle, “Human Performance” cannot be ignored and is a strong concrete fusion of what’s capable.

In the pace of Human Performance there’s a great ebb and flow to what really lies as a unimodal album. The sprinkling of quick cut songs only keeps it chugging along to the peak and powering out to the end. Songs like “Outside” give a great tune, but keep you accustomed and perhaps ready for what songs could be a bumpy ride for a first listen. I remember having the album on shuffle for the second listen and thinking what happened, stumbling on “I Was Just Here” without proper context was pretty jarring.

Moving forward in this stretch, being accustomed to the punches rolled out, every deep cut has its chance to be deeply moving or joyfully accepted for absurdity. The lyrics Chinese fried rice really stumbled me in “I was Just Here,” but there’s great treasure to be found in more art-punk deliveries like “Captive of the Sun.” Using elevator tune xylophones and Talking Heads style lyrical retorts over a deeply intricate melody, “Captive of the Sun” perhaps metaphorically talks about the stakes taken by artists — again playing into the traveling Human Performance. It’s these seemingly lackluster deliveries that empower songs like “Keep it Even.” Employing the easygoing gϋiro — that ratcheting latin sound maker— and dismal deliverance it’s a comforting laziness. Lackadaisical in its sense is a beautiful thing especially when with the flip of the switch there’s the same kick and drive of guitars that floors fans.

Maintaining a solidarity with previous roots while still striving for something fresh, Parquet Courts’ Human Performance is rich in hand picking songs for bopping to bold bangers or just vibing to some prime deep cuts. I deeply support the notion that there was something thematic and methodical pursued in the album for the sake of self-exploration. Human Performance being the tale of a man chewed up and spit out in the world to be judged and morphed.

The titles of the tracks and even aforementioned lyrics beckon this contemplation as the album progresses, and it’s fair to say that their outcries for musical pursuits have a map to follow.  After all, there are so many Berlins in this world for even our New York band to leave and find themselves in a barren contemplating outskirts. So, for the sake of performance do we take these trials and tribulations and enjoy them for the sake of art?