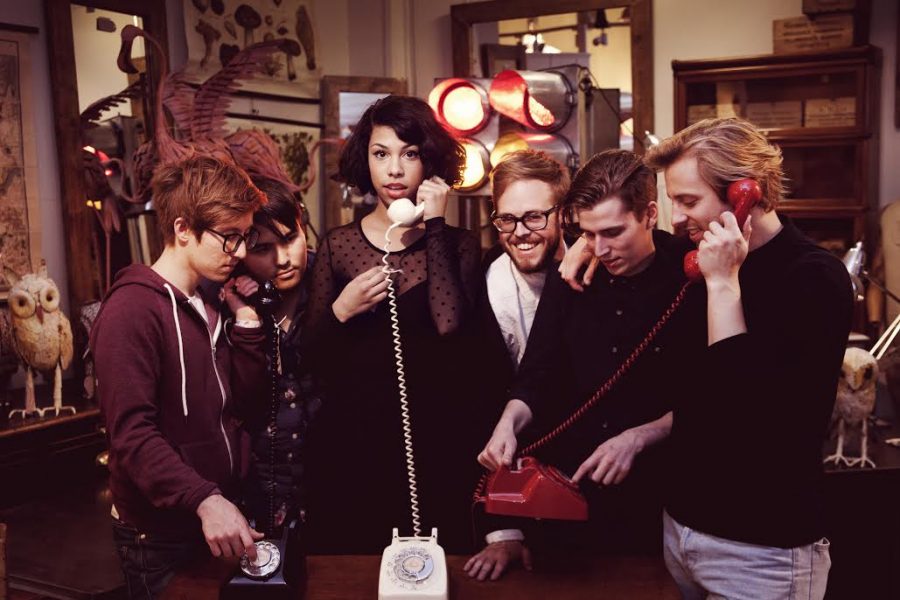 On Friday, February 19, PHOX performed at Holland’s historic Knickerbocker Theatre as part of two Midwestern dates that week. I sat down with lead guitarist Matt Holmen to talk about plush caterpillars and all things new with the band: new music, a new movie, and a new collaboration with Wild Child.

You have these two shows here in the Midwest, and I saw a couple days ago on Facebook that you would be playing some new songs. Was yesterday [Feb. 18] their live debut?

Yeah, a few of them have been around for a little bit. We played a few shows around home in the fall, early winter. And now, we just worked out a couple more for this little run of dates.

It’s funny how having a deadline can just make you finish something… we’ve been on the fence with some of these tunes for three or four months and just having this deadline was like, “Okay, well let’s just pick a direction, go with it and see how it feels.” And then you start discovering all this stuff as you’re working through the tune and kind of committed to something. So, for a lot of these tunes, yeah, this would be the first time we’ve really played them for anyone.

What was it like playing new music for an audience?

It’s great, it’s informative to how the song feels when you play it in front of someone else. You just have a different sense of what the song is. And it’s just exciting to play new material. And the way that we play these new songs [has] kind of informed how we play the older songs too. So we’re kind of trying to blend those together as we’re transitioning to a new album and new era for us.

So these songs are off an upcoming release?

Of these new tracks you’ve been playing is there one in particular that you enjoy that you’re looking forward to sharing when release time comes?

There’s one song that’s called “Pillowcase” that just seems to be our band’s favorite song, which is the first one that we wrote for the new record. It was just kind of effortless – the way it came together. So that feels good.

A couple months back, and I remember this because it was about 3 a.m. when I saw that on YouTube that a new video was posted by PHOX. It was for Amor Fati, which was the mockumentary/docufiction that you guys created. What lead you to coming up with the idea to create your own mockumentary?

We made that for the Eau Claires [Music & Arts] Festival that Justin Vernon puts on. And he was asking different artists to do multimedia stuff. And Zach [Johnston] had been talking to him – Zach directed it – he had been talking to him about film. We recorded our [debut] record at April Base, his studio in Eau Claire, so this just came up in conversation. And it was like, “Hey, that’s a great excuse for us to some new project.” And again, like I said, having a deadline for something makes it so much easier to get done.

So, that thing happened and it was pretty much a year until we had to finish it. Zach compiled all this real documentary footage, just stuff from being on the road. So the rest of the story is a dramatized version of our history as a band, more or less summarizing how we’ve transitioned from hobby musicians to “this is our job, I guess” kind of thing. It was fun! Zach and I have been making movies together since we were 10, and that was just an extension of the same thing.

Well, I have three.

They’re about the same palette.

Yeah! Absolutely. The giant ones, [they’re] like six or seven feet long. Plus, I had a cuddling problem where I would cuddle my bandmates, whoever was sleeping with me. So it made it a lot easier to just put the big caterpillar between us and I would just cuddle that.

I had no idea that you could buy body pillows at gas stations.

You know, the big chain ones, like Love’s and stuff, have the weirdest supermarket in there. They have leather vests and T-shirts and stuffed animals…

What’s the weirdest thing you’ve picked up from a gas station?

Oh man. There’s this one gas station that’s in the middle of the desert that’s built with the façade of a town with a church, a trading post, saloon, and a jail. My dad used to do magic tricks when I was little, and he used to have the little fanny pack full of stupid tricks. And one of them that I remember was a package that said “Rattlesnake Eggs: Keep Cool.” You seen these before?

Yeah, actually. Not too long ago, a group that was promoting their new album mailed me some “rattlesnake eggs.”

The trigger was already sprung, so it didn’t scare me.

[Groans in disappointment] But you got to…

Yeah, there’s video of me scaring all my coworkers.

[Laughs] My dad had one of those when I was a kid that somehow got lost over the years. So I refound for 99 cents. That was probably the coolest thing that I’ve found at a gas station.

A few months back you were working with Wild Child, right? As part of a new “supergroup” called The Bad Marriage.

Monica [Martin] and Kelsey [Wilson, of Wild Child] had talked to the guy at a blog called Wild Honey Pie, and they just wanted to do something different. So, it was a cool excuse to have a new collaboration and again, a deadline equals a result.

And the name… who came up with that?

I think that’s Kelsey’s concoction. I suggested Failed Marriage, but it was shot down. Thought it had a better ring to it.

When you’re working with another band like Wild Child, what is it like writing and performing with a whole different band?

Yeah, that’s funny… basically we each brought in songs from our respective bands. So we played some new PHOX stuff with Bad Marriage and they played some unreleased Wild Child stuff. We did some covers. So it was pretty easy. And we had only one day to practice, so we rented a rehearsal space for three hours and it just happened to start right at the end of the Hail Mary Packer game against the Lions. And I’m the biggest Packer fan so I was so bummed to be missing the end of the game, but I thought we were losing anyway. So it all worked out. It actually couldn’t be better.

[When we played] it reminded be so much of early PHOX because it was kind of the same instrumentation and the same vibe. Very different way of arranging and playing together. It was really fun! I’m so glad I did that.

Were you part of Sonntag? Was that similar to The Bad Marriage?

Yes! Yeah, that’s funny because Zach wrote all that stuff and was producing it with Davey [Roberts] and they were pulling in our friends, musicians, to chime in on stuff. That was a [nearly] three-year project. It was in post-production for years – funny for a bedroom album. And it actually just got released on vinyl.

That was the first time we [PHOX] had all played together. We did go on tour with that show two or three years ago. It was a lot of fun.

So, back to The Bad Marriage… do you see yourselves touring with Wild Child as The Bad Marriage at some point in the future? Or are you thinking this is more of a studio side project?

Oh man, who knows? It would be fun. It would definitely be fun.

As far as the things that you recorded: will those be released eventually?

Oh yeah, Wild Honey Pie is releasing live stuff. We did three sections, basically. The event was called “On the Mountain.” Wild Honey Pie puts on these session-festivals where they’re taping each show and so sometimes the bands have to restart and do the songs again so they can get video coverage.

But yeah, there were a hundred people there. Awesome bands. Dan Croll played, Of Montreal played. I would definitely recommend it if you ever see one of those events that Wild Honey Pie puts on.

I actually interviewed Wild Child back in October when they came to The Ark. One of the things that Alexander Beggins brought up was that he’s always pulling these terrible pranks on his bandmates. What I’m curious to know is if you or anyone else that was there with Wild Child fell victim to any of his pranks.

[Laughs] No, I didn’t fall victim. I’m sure it will happen.

What about you and the rest of the members of PHOX? You ever pulling stuff on each other?

We’re not really too prank oriented. We’re really not terribly rowdy in that way [Laughs].