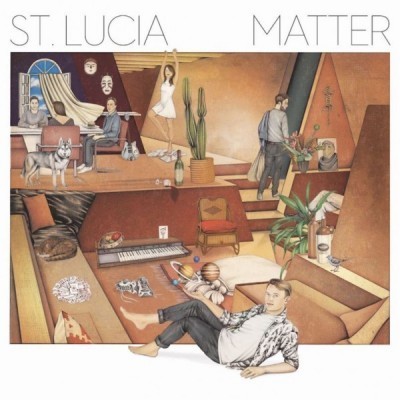 A show is hardly a show if the artists on stage lack stage presence or are unwilling to interact with a crowd. In that case, a show is a mere utilization of instruments and an amalgam of vocalizations without stage presence. Thankfully, at the St. Lucia show on Saturday at the Majestic Theatre in Detroit, lack of stage presence was not an issue. Multiple key elements differentiated St. Lucia from the array of indie-electronica pop bands prevalent today.

It’s a wee bit uncomfortable when you get vibes that band members have animosity for each other at a show. If they don’t have chemistry, and they aren’t feeling each other, how are you supposed to enjoy the music yourself? It creates a tense atmosphere that pollutes the ambience of the concert.

Lead singer Jean-Philip Grobler had obvious affection for his fellow band mates as he teased the crowd after their chant consisting of “wanting Ross”, the guitarist of the band, while simultaneously understanding their desire for Ross. Watching Jean-Philip groove with keyboardist Patricia (Patti) Beranek, his wife of three years, (although they had been together for over a decade before marriage) was like watching some sort of musician fantasy.

Stage presence wasn’t even a question.

Grobler’s electric dance moves were carefree and deeply in tune with the, well, tunes. Beranek certainly was feeling the music herself, and even drummer Nicky Paul stepped out from behind the drums and grooved out on stage. The carefree nature of their movements was yet another alluring aspect of the show. (Not to mention, the abundance of cacti on the stage was a lovely touch.)

They weren’t afraid to step into the crowd itself.

In ode to Valentine’s Day, Grobler emerged into the crowd during their sleepy, romantic song “Love Somebody”, wooing male and female fans alike as he danced with charmed fans. It was intriguing to see a lead singer so down to earth, willing to intwine with the crowd by interacting with the fans financially supporting their tours.

The unalike influences of their music are exceptionally harmonious.

Who knew South African and eighties influences could meld into such smooth indie electronica pop? It sounds like a messy juxtaposition, but the different influences really do coincide to create the unique St. Lucia sound. Their ballad, “Home”, takes you to another decade with its eighties soft rock homage. Grobler’s South African roots lay bare in the upbeat “Wait for Love”.

The band’s pleasant juxtaposition of influences and energizing stage chemistry entwined for a vibrant, dynamic performance that I was pleased I spent my Saturday night attending.