Despite High Attendance and Progress Made, MSU Wrestling Falls to Indiana 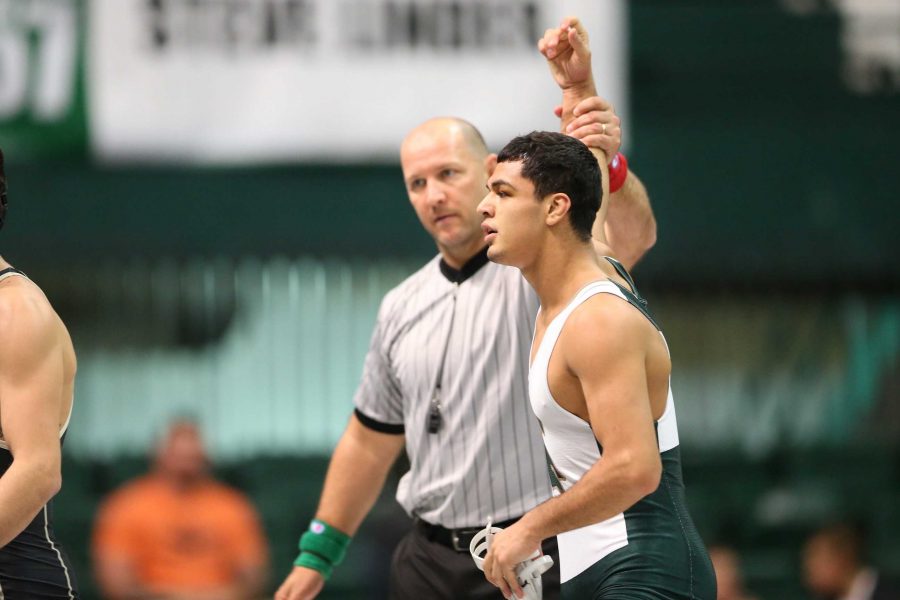 The Michigan State Wrestling team had their best meet of the season Friday night in their nationally televised battle against Indiana. It went right down to the wire, but Indiana held off the Spartans by a score of 20-15.

While the loss tonight prevents the team from adding a tally in the win column (0-11, 0-6 Big Ten), head coach Tom Minkel is certain that the team is making great progress.

“I’ve got a team with a lot of young guys,” Minkel said after the match. “We won 5 out of the 10 matches so that’s a step forward for us. This is a tough business, because you want fast progress and to make big strides, but honestly most strides turn into small steps. So we took some steps tonight and made some great progress.”

The Jenison Fieldhouse was rocking all night, with an impressive attendance of over 550 people. There were tons of fans for both teams, and also tons of children running all over the place with oblivious thoughts other than rooting for a team. MSU Wrestling invited area youth wrestling teams to campus and see the match.

The Spartans dug into an early hole when senior Joe Johnson was forced into a medical forfeit after a possible concussion, ending the first round with a 6-0 deficit. Things got worse when Indiana’s sixth-ranked junior Nate Jackson earned a 17-6 major decision over freshman Shane Shadaia.

The tide turned after the rough start and all it took was Shadaia’s freshman brother Shwan Shadaia to win a big match against Indiana junior Matt Irick. Points were hard to come by in this hard-fought seven minute battle, and a huge one-point escape early in the third round was the difference maker for Shadaia taking a 4-2 win.

The next match was even better as freshman Jacob Cooper started off strong with a takedown and a 4-point near fall in the first period alone. The 7-0 shutout gave the Spartans the momentum heading into the intermission break, as they quickly cut the once monumental deficit to 10-9.

The second half started with two entertaining matches. Junior Dimitrus Renfroe lost the heavyweight battle and sophomore Mitch Rogaliner lost the 125 match. The contrast in wrestlers there on the mat was fascinating to see, from the hard nosed gladiator battle to the skinny limb battle directly after.

Another deep hole of 16-9 looked like too much to overcome, until the two best wrestlers for the Spartans came up to the mat, and could not have come at a better time.

Junior Garth Yenter faced off against Indiana senior Alonzo Shepherd in a must-win match for MSU. A couple questionable “potentially-dangerous” calls on Yenter got the crowd riled up, increasing the excitement for when he dominated the second round with an early takedown and some great moves to earn the 5-2 win.

With the excitement level through the roof, Spartan star in the making sophomore Javier Gasca came in and took a huge win over Hoosier freshman Cole Weaver. Another 7-0 shutout left him just short of a major decision, but still earned a win by decision to make it a 1 point game: 16-15 IU.

“Javier is indeed a special athlete,” Minkel said when asked about Gasca. “He’s got incredible focus, he understands the sport well, he’s a heck of an athlete, and he’s growing into a leadership role on our team. Everyone looks to him now as the standard and we’re all aspiring to his work ethic and ability to manage a match.”

Gasca leads the team in wins this year with 14, with a stellar 14-4 record. He also boasts a No. 15 ranking from Wrestling Insider Newsmagazine (W.I.N) and a No. 18 rank with FloWrestling, two numbers that look to go higher and higher as time goes on for this kid.

With a winner-take-all tenth and final match, Kaelan Richards did not have enough for sophomore stud Luke Blanton, who took a commanding lead early in the second period and never looked back. He took the 14-4 win and sealed the deal for the Hoosiers (6-1, 3-1 Big Ten).

The Spartans travel to Ohio State to take on the No. 9 ranked Buckeyes Sunday at 2:00 pm.