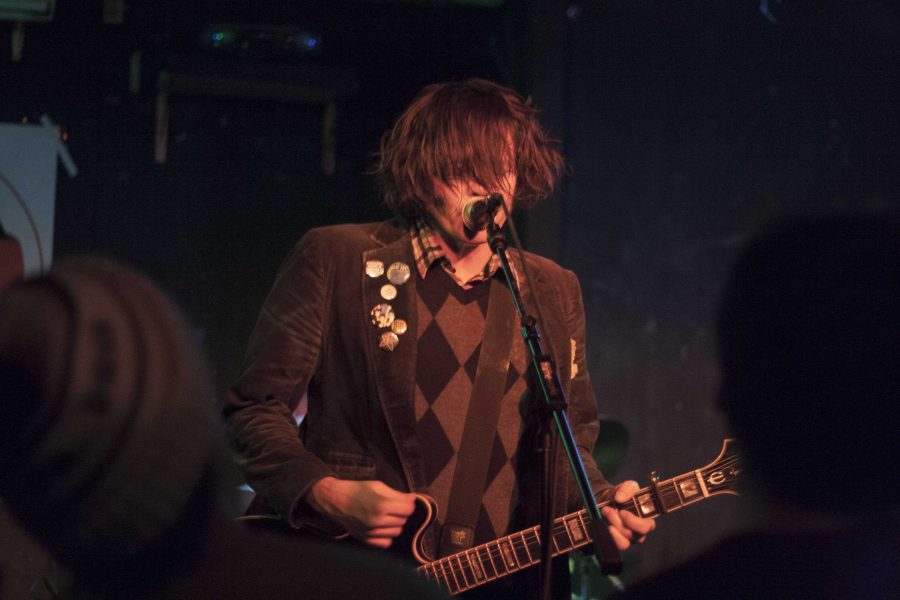 My ears have been ringing for over twenty-four hours, which means the Beach Slang show on Sunday, November 22 was awesome.

I got to Mac’s Bar around 7:30—just in time to catch the first opening act, Worn Spirit. The band is from Lansing, and they put on a pretty good show.

The crowd consisted of women wearing jean jackets covered with sewed-on patches and men with impressive beards sipping on beer while bobbing their heads to the music. Not many people were there at first, so it was pretty easy to get close to the tattooed frontman.

After Worn Spirit played for about thirty minutes, the female-fronted Worriers came on stage. The three women, and male drummer, from NYC also succeeded in pumping up the crowd.

Lithuania came on next. This band was probably my favorite opener of the night. Lithuania had a pretty similar loud pop-punk sound as Beach Slang, so they were a perfect opener. The crowd started to dance more while the guitarist, Dominic Angelella, whipped his hair from side to side while shredding on his guitar and yelling into the microphone. Angelella introduced himself to me at the band’s merch table after the show, and he was a pretty nice guy. I probably would have bought a copy of their new record, Hardcore Friends, if I wasn’t always wandering around without any money.

When Beach Slang finally came on, Mac’s Bar was packed. When they started playing, a few extremely intoxicated guys opened up a mosh pit, which seemed to bother some of the older people in the crowd.

Beach Slang is based in Philadelphia and has been releasing music that is “part punk, part pop and all catharsis” since 2013. The band has gained a decent-sized fan base for only having released two LPs. The band earned its name from a girl the front man, James Alex, used to skate with who referred to his dialect as “beach slang.”

Alex was sporting a navy jacket with pins on it and red pants on Sunday night. His wild hair fell in front of his face while he sang songs off their newest album, Broken Thrills, and EP, Here, I Made This for You!

When the crowd started to calm down a bit, Alex said, “this song is about French kissing and American girls,” before they played “American Girls and French Kisses,” which got the crowd all riled up again.

Before leaving the stage Alex said he was “just going to play the encore now,” because he thinks when bands leave the stage and then come back on for an encore is dumb. After Beach Slang finished their set, Alex said he enjoyed Lansing and thanked the crowd for attending their show.

After the show, people hung out around the merch tables while chatting with the band members and smoked their last cigarette outside before catching a ride home.

The Lansing show was one of the last shows on their tour, and I could tell the bands have grown close while traveling together. All four bands succeeded in impressing the crowd with their loud punk music.