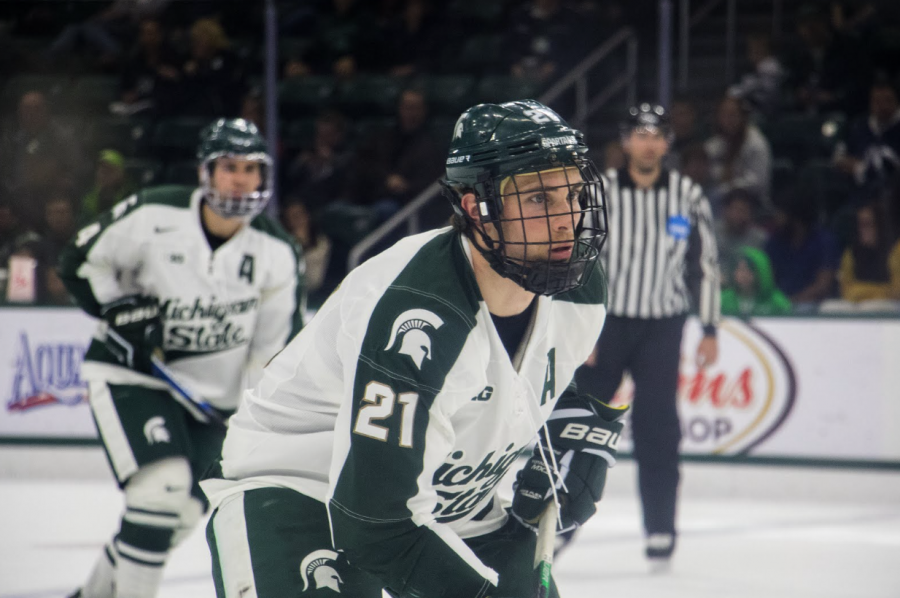 Right from the get-go, North Dakota was stronger, faster and hungrier than the Spartans. It was the same kind of start the Michigan State has had for the past four games now.

“I don’t know if guys were just too uptight, gave them too much respect. But, there’s been a few games so far where we haven’t gotten off to a good start,” Spartan coach Tom Anastos said.

North Dakota got things going less than two minutes into the game. Tucker Poolman sent in a shot from the point which ricocheted off of Jake Hildebrand’s right pad into the back of the net. Down 1-0 Michigan State was unable to capitalize on the man advantage later in the frame. Coming into this game North Dakota’s penalty kill was operating at about 77 percent.

The Fighting Hawks extended their lead late in the first after a perfectly executed three-on-two. Drake Caggiula snuck a wrist shot through the five-hole of Hildebrand and gave North Dakota a 2-0 lead going into the second period.

The Spartans were outshot in the first 14-7.

“They came at us pretty hard, they were obviously on the road and came out with a good start and put us on our heels a little bit,” senior captain Michael Ferrantino said.

In the second period, North Dakota again came out fast and was rewarded. Less than 40 seconds in sophomore Nick Schmaltz took advantage of an MSU turnover and slid a perfect pass over to Caggiula for an easy tap-in. Hildebrand had no chance on the play and the Spartans found themselves in a 3-0 hole.

“You can’t spot a team with that kind of turnover,” Anastos said.

Throughout the period Michigan State struggled to get any sustained pressure in the offensive zone, often the result of an ill-advised pass instead of a shot.

“They’re (North Dakota) a good defensive team,” Anastos said. “I didn’t like our puck support most of the night. I thought we did a little more chasing than I cared to.”

The Spartans finally found daylight when junior forward Thomas Ebbing took advantage of a rare North Dakota turnover and slid it to fellow junior Joe Cox. Cox was able to skate in and beat UND goaltender Cam Johnson short side, cutting the lead to 3-1. Michigan State had several more chances in the period but were unable to close the gap.

The third period was a slow affair of puck possession and strong defense. It took about 10 minutes before either team registered a shot on goal. Things got chippy late in the game, as the Spartans got a late powerplay when North Dakota freshman Rhett Gardner received a game misconduct. MSU was unable to convert on the six-on-four powerplay (they had pulled Hildebrand for the extra attacker) and skated off with their third loss in four games.

Michigan State will face the Fighting Hawks next Sunday at Munn. Faceoff is at 3:05 p.m.

The Spartans will have to have a fast start and play a full game in order for them to pull the upset.

“This team has gotta learn how to play 60 minutes,” Anastos said.