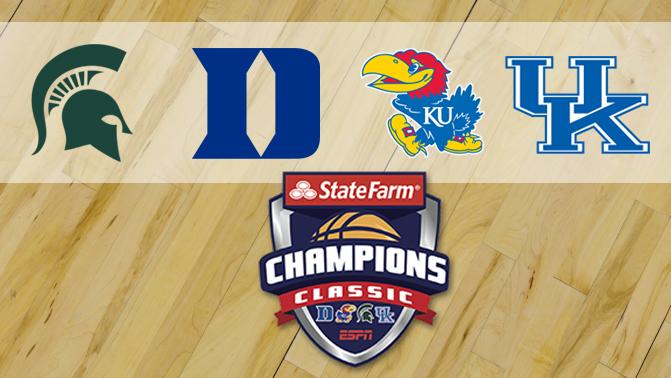 For the first 30 minutes of this matchup with the No. 4 ranked Kansas Jayhawks, it appeared as though the Spartans were in for another November disappointment. Kansas stubbornly held a five-point lead for most of the game, pulling away anytime the Spartans got close.

Rock Chalk extended their lead to 11 with 9:34 remaining, the dagger within reach. But Sparty stormed out of a Tom Izzo timeout and ripped off a 15-3 run to take the lead with 4:53 left in the game. It was their first lead of the game since the score was 6-5.

Denzel Valentine either scored or assisted on all 15 points, en route to a historic triple-double. He became just the fourth Spartan to reach that status, joining Magic Johnson, Draymond Green and Charlie Bell.

It was a back-and-forth affair from then on, the Spartans and Jayhawks trading haymakers. Perry Ellis converted a layup to tie the game, Valentine responded with a jumper of his own 32 seconds later. Wayne Selden Jr. nailed a three-pointer to take the lead, Valentine took it right back 14 seconds later. Izzo talked about Valentine not being aggressive enough at times, and he must have received that message.

In order for the Spartans to win this game, they knew the freshmen would have to step up in a big way. And they did.

Matt McQuaid became the baby-faced assassin down the stretch, burying a contested three-pointer with under a minute to go. Then he made his presence known on the defensive end and swatted a Kansas shot away down low. Pandemonium in the paint ensued with a flurry of blocks and turnovers. Coach Izzo’s cardiologist was not very pleased.

The second freshman came up clutch for Michigan State, and that was Deyonta Davis. The big fella buried two free throws, just his third and fourth attempted of his career, to ice the game for the Spartans. They avenged an ugly 61-56 loss from last year at the hands of the Jayhawks.

Matt Costello’s post game was a thing of beauty. He had the jump hook working to perfection, but could not stay out of foul trouble. He finished with 10 points and nine rebounds before fouling out with 30 seconds left. Fellow big man Davis struggled to score on the bulky frontline of Kansas, but nabbed eight rebounds to go along with two blocks.

One major area of concern for Michigan State is turnovers. They gave the ball away 16 times, compared to just six times for Kansas. The Spartans won’t be fortunate enough to win too many games with that turnover margin.

This win is a huge confidence boost for the Spartans, who looked disorganized and lacked chemistry at times during the two exhibition matches and the season opener. The non-conference gauntlet is not over though. MSU still has a potential matchup with No. 10/12 Arizona in the Wooden Legacy, then two home match-ups with Louisville and Florida.

This win could be the catalyst MSU needs to run the table going into conference play. It’s a daunting concept, but the Spartans have the pieces in place to make it happen.

Next game: Friday vs. Arkansas-Pine Bluff at 7 p.m. at the Breslin Center.