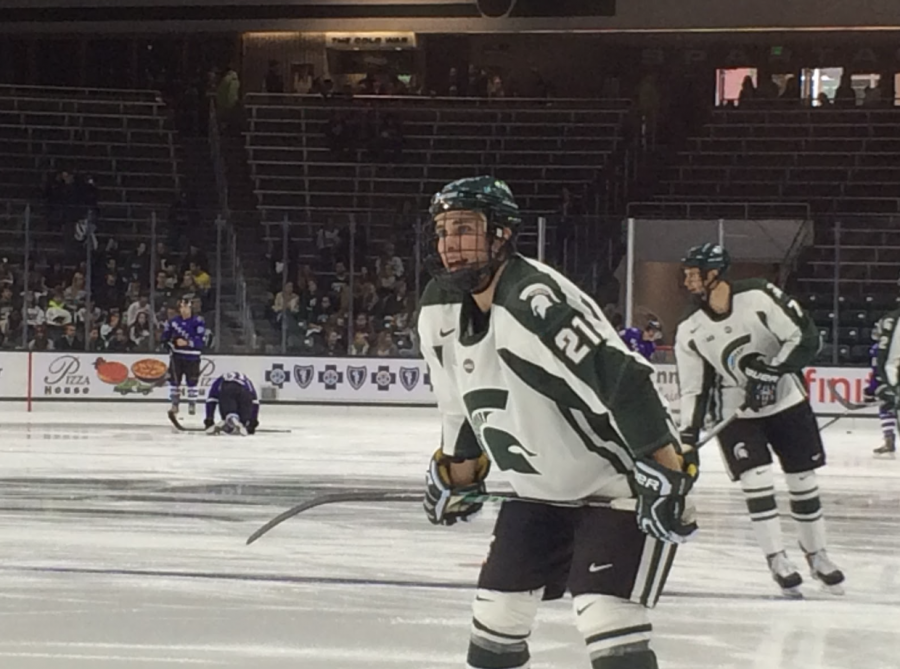 EAST LANSING –Fans at Munn Arena were treated to a flashback game, or so it seemed. They went back to a time when goaltending was optional and offense was abundant.

Michigan State completed the sweep of the Wildcats after a 7-4 win last Saturday. Coupled with Friday’s 5-0 performance, the Spartans netted 12 goals in the weekend.

Yes, that is right: 12 goals in only two games.

Seven different scorers found the back of the net on Saturday. Villiam Haag, JT Stenglein, Mason Appleton and Joe Cox both earned their second goals of the weekend. Mackenzie MacEachern, Ryan Keller and Brennan Sanford also picked up goals for the Spartans.

“I don’t think we scored that many in one weekend on back to back nights. It feels good, kinda a long time coming, good to break through. Good for a lot of guys to get goals and spread it around,” said senior captain Michael Ferrantino who had three assists on the night.

The scoring started for MSU within the opening minute. Cox received a rink-wide pass on the left-hand boards and rifled a wrist shot over the glove of UNH goaltender Danny Tirone. Cox’s third goal of the year made it 1-0 State. Appleton then made it 2-0 Spartans at the 9:20 mark of period, his second goal in as many games. UNH made it 2-1 late in the first, but the Spartans killed off two consecutive Wildcat power plays to end the period.

Still with momentum entering the second, UNH forward Tyler Kelleher tallied his fourth goal of the season on the powerplay to tie the game 2-2. It was the first power play goal the Spartans had given up since their first game of the season against Maine.

Michigan State powered back though with Villiam Haag’s second powerplay goal of the weekend. Haag’s key strike regained the lead for MSU and the Spartans took the 3-2 lead into the locker room.

JT Stenglein gave the green and white the 4-2 lead early in the third. However, two unanswered UNH goals (one on the powerplay) tied the game for a second time.

The Spartans would not be denied though.

Coach Tom Anastos sent out his fourth line of Sanford, Connor Wood and Justin Hoomaian to get some energy back. Instead they picked up a goal. Sanford had the puck on his stick on the left side of the net and chipped it behind Tirone to give MSU the 5-4 lead. It was the East Lansing native’s first ever Spartan goal.

“We got the puck to the net from the point, and it was sitting right there for me. It couldn’t have been an easier goal to put in,” Sanford said.

Recently back from injury, Ryan Keller made it 6-4 on a similar play to announce his official return to the lineup. Mackenzie MacEachern, picked up the empty netter with three seconds remaining to cap an impressive 7-4 win.

“I was real pleased that we got contribution, from an offensive perspective, from all four of our lines,” Anastos said after the game.

The Spartans are starting to gel after key injuries early in the season hampered their production. Anastos credits the off week with helping his team get healthy and build some much needed chemistry.

“This break came at a good time and it allowed us to not only heal up but actually to spend some time with lines working together,” Anastos said.

In addition to picking up their first sweep of the season, the Spartans improve to 4-3-1 overall.

Michigan State’s 12 goals in one weekend ties the most offensive series ever under Tom Anastos going back to the 2013 against Princeton.

The Spartans travel to Boston next weekend for a single game against the Screaming Eagles of Boston College.