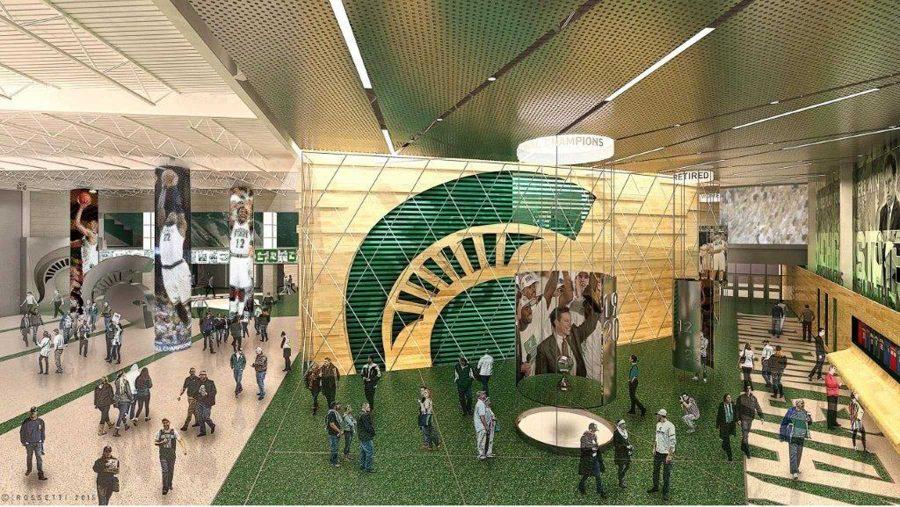 “The Hall of History will be an amazing addition to the Breslin Center. Michigan State has a rich basketball tradition and this will be the perfect way in which to display it to Spartan fans, alumni, and recruits” head men’s basketball coach Tom Izzo said to MSUSpartans.com. “What excites me about these renovations is that there really is something for everyone. Jaws will drop when fans enter the Hall of History. […] I can’t wait to see the finished product.”

Officials say that construction will begin in January, 2016 and will be finished by August, 2018, with “substantial completion” of the renovation completed by June of 2017.

Many things will be added, but many things will also be fixed in the Breslin Center. Concession stands, bathrooms, elevators, entrances and parking lots will be a point of emphasis for improvement. Twenty-six thousand square feet will be added with this project, allowing the MSU Basketball Hall of History to be constructed and looked at for years.

“It’s exciting to know that the Hall of History will be the first thing that people will have the opportunity to experience, especially with all the success of both basketball teams” head women’s basketball coach Suzy Merchant said to MSUSpartans.com.

The Hall of History will be located on the southeast side of the complex, and will showcase highlights and accomplishments of individuals, as well as teams in the men’s and women’s programs throughout the years.

Another big addition with this project will be the Draymond Green Strength and Conditioning Center. Green is a Spartan alum, who recently donated the largest donation to an alma mater by a professional athlete ever ($3.1 million) after winning the 2014 NBA Championship with the Golden State Warriors. The Center will include a locker room for former MSU student-athletes to utilize for training during the offseason.

Although this project will be done by 2018 at the earliest, the Spartan basketball teams are ready to compete this season, with action kicking off early in November.