No. 3 MSU Club Football Eases Past No. 13 Wright State 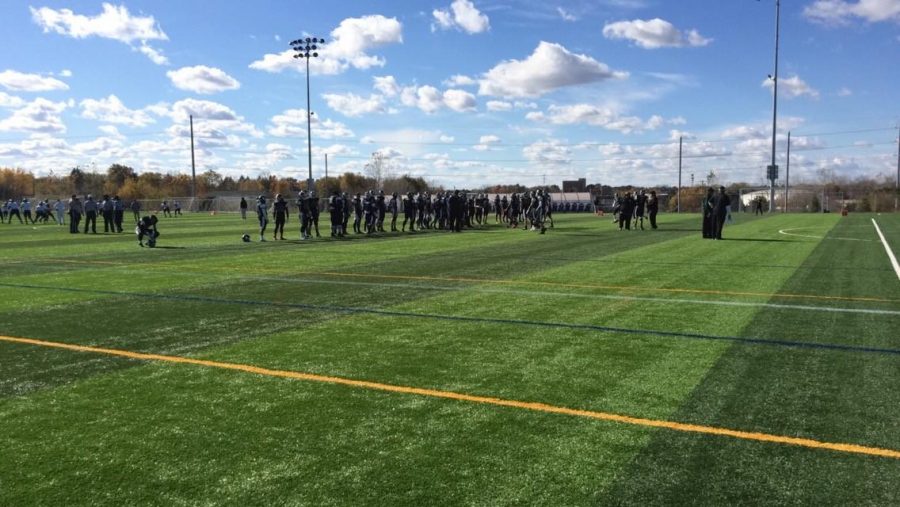 LANSING — Michigan State club football continued its unbeaten streak on Sunday in front of nearly 200 fans at Hope Sports Complex. The No. 3 Spartans, playing their final home game of the season, cruised past the No.13 Wright State University Raiders, 43-6. The Spartan defense led the charge by slowing down the Wright State attack, while MSU’s offense methodically moved the ball downfield.

The rushing attack set the Spartans (3-0 overall, 3-0 in division play) up with the lead early, a lead they would not relinquish. Austen Cox ran in first quarter touchdowns of 35 and 10 yards, giving the Spartans a 14-0 lead after the first period.

“I’ve gotta give it up to [the offensive line],” Cox said after the game, deflecting all the praise. “I don’t really do much. They do all the work for me. I just run the ball and go where they let me go.”

Wright State (3-4, 1-2) scored their only points of the day on a second quarter drive highlighted by difficult throws and catches. The drive ended in a touchdown and a failed two point conversion. The Raiders, with only 23 active players and an interim head coach, could not muster much more offensive success for the remainder of the game.

The Spartans, with 57 active players and an established coaching staff, dominated until the final whistle by scoring in just about every possible fashion. On the Wright State kickoff following their score, Spartan cornerback Tray Wiley sprinted 85 yards for a touchdown.

“We worked on [special teams] a lot this last week,” Spartan head coach Al Manfroni said. “I emphasized it, based on the varsity MSU game. I said it can be the difference between winning and losing a game. We practiced it…and it showed. I can’t complain.”

After another Wright State punt, MSU quarterback Vinny Costanzo (10-for-18, 152 yards, one TD, one INT) passed his way through the Wright State secondary and connected with Zach Chargo for a 23-yard touchdown. That gave the Spartans their halftime lead of 27-6.

The third quarter was one of missed opportunities for the Spartan offense. After moving the ball deep into opposing territory, the Spartans could not convert a field goal attempt. Another deep drive ended in Wright State’s defense coming up with a stop on fourth and goal.

Michigan State’s defense certainly made up for the offense’s mishaps, though. The Raiders were held to three-and-outs on many of their drives, failing to string together first downs all day. The Spartan defense even outscored the Raiders offense; defensive coordinator Chris Pickney’s unit got on the scoreboard late in the third quarter with a Bill Zatezalo fumble recovery in the end zone, followed soon after by a safety.

“The defense played a good game,” Pickney gushed after the game. “Just an overall team effort. Very happy with [safety] Lucas Mayo; he played lights-out today, making some key tackles in situations. [The defensive line] did very well today, filling the gaps. The linebackers did well, because we were short with our linebackers because of injuries, but everyone stepped up and played ball today. Our corners were lights-out as well.”

Mayo, a team captain, echoed his coach’s thoughts.
“Once again, the front seven played great. It’s easy to play when you’ve got all those big guys up front doing work. Everybody played great today.”
After Wright State’s free kick following the safety, Michigan State chewed up the clock and punched the ball into the end zone with a 7-yard touchdown run by Omar Droubi. That score, the final tally of the game, initiated a running clock for the remainder of the game, due to the National Club Football Association’s 35-point mercy rule.

The Spartans will travel to the northeast next Sunday, Nov. 1, to take on the University of Michigan-Flint Kodiaks, who have not won a game since the 2013 season. The game will be played at 3:30 p.m. at Holy Redeemer Catholic Church in Burton, Michigan. That contest will set the stage for the Spartans’ final regular season contest, a showdown with the top-ranked Miami (OH) Redhawks.