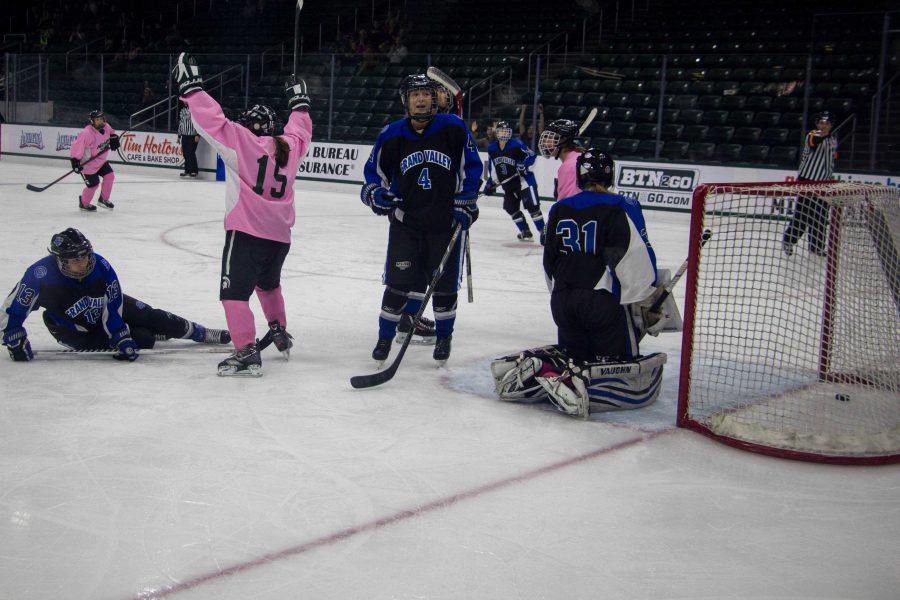 Failing to keep up intensity left the Michigan State women’s ice hockey down a point from GVSU at the end of a hard-fought third period on Sunday at Munn Ice Area.

MSU suffered a hard 1-6 loss against GVSU on Friday, Oct. 16 at Georgetown Ice Arena. This time around, the Spartans lost 2-3 against a veteran Laker team.

“We came out there on fire,” senior Sydney Glanz said.

MSU got the first goal of the game, with Glanz finding the back of the net in the first period.

Then, however, the fire dwindled down, as MSU started to let up and get comfortable, Glanz said.

Complacency replaced consistent hard play starting in the second period. This allowed GVSU’s veteran team to take control of the puck and gain an edge over Michigan State. Nine of the Lakers’ top 10 players from last year returned this season.

Grand Valley evened the score with 7:52 left in the second period, after picking up a shorthanded goal. A few minutes later, the Lakers took advantage of their opponents complacency and upped the score to 2-1.

The game sped up after a quick response from MSU sophomore Kelsey Cross, tying the game.

“We forechecked a lot better. The forechecking was key, and it took GVSU off their game early in the game,” MSU head coach Rob Blackburn said.

Pressuring defensive play in the offensive zone is what kept it a closer game this time around. That, and penalty kill, are the Spartans’ strong suits.

By the third period, the aggression was at its max. Players got scrappy.

“We have a lot of history with girls on this team that we played against throughout our entire career,” Glanz said. “It definitely gets a little chippy towards the end.”

GVSU players tend to hit MSU’s goalies more than they would like, Glanz said, which led to a little confrontation between players in an aggressive third period.

With nine minutes left in the third period, GVSU scored and got the upper hand on Spartans. Nine unanswered minutes later, the Spartans fell again to the Lakers, 2-3.

This is Blackburn’s first year with MSU women’s ice hockey. Previously, he coached at the University of Michigan.