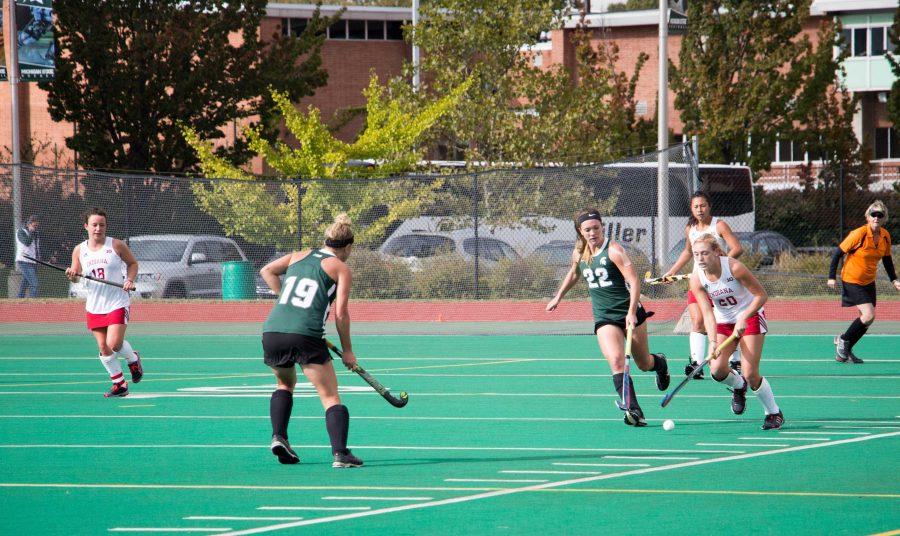 To the four seniors’ dismay it was not a favorable match, as the Wolverines came into play 13-3 (5-1 in Big Ten) and ranked No. 11 in the nation.

It did not take long for Michigan to open up the score, as Mackenzie Ellis scored just six minutes into the game off a penalty stroke.

The fans could already tell it was going to be a rough game when MSU had only crossed the half line once in the first 10 minutes of the game.

MSU’s goalie Katie Miller, the Big Ten leader in saves per game, held down as long as she could, not allowing Michigan to score off of their first eight penalty corners. But with the Spartans lacking in time of possession, Miller could only defend so much before the Wolverines’ Carly Bennett scored, assisted by Ellis, making the score 2-0 in favor of Michigan.

Every time the Spartans would get something going on offense, the ball was carelessly passed away or knocked away by the Wolverine opposition.

With the lack of Spartan possession, it was not long before Michigan’s Emma Way scored the third goal of the game off a deflection from a shot by Bennett.

With only eight minutes left in the half, Michigan State would call a timeout to hopefully draw up a play that would give the Spartans their anticipated first shot of the game. As the old adage goes “you can’t win if you can’t score, and you can’t score if you don’t shoot.”

About 10 minutes into the second half, Michigan’s Lauren Thomas would score, assisted by both Veerle Lubbers and Ellis. That would extend the Wolverines lead to 4-0 with time ticking down in the second half.

With 13:58 on the clock, MSU would finally get their first shot, but nothing came of it.

A few minutes later, with 5:20 on the clock, Michigan State would get their first penalty corner, which was quickly knocked away by the Wolverine defense.

And just when you thought it couldn’t get any worse for the Spartans, a goal by Michigan’s Morgan Dever made the score 5-0 with just under a minute left in the game.

Tyler believes the team has to start the way they finished in order to compete in next Friday’s game at Louisville and later on in the Big Ten Tournament.

MSU head coach Helen Knull had similar attitudes toward the second half performance as Tyler.

“Our second half we finally started to click and get things going on the offensive side,” Knull said when asked about any positives to take away from Sunday’s game.

Although plagued by a poor last game at Ralph Young Field, Tyler’s memories are positive overall while playing at Michigan State.

“It’s been all about hard work and teamwork for us here,” Tyler said. “There’s nothing we don’t do as a team, and our wins and losses are reflective of how we are as a team, not by individual performances.”

On Friday, the Spartans will go on the road to play the Louisville Cardinals.

The Big Ten Tournament begins next week, on Thursday, November 5.