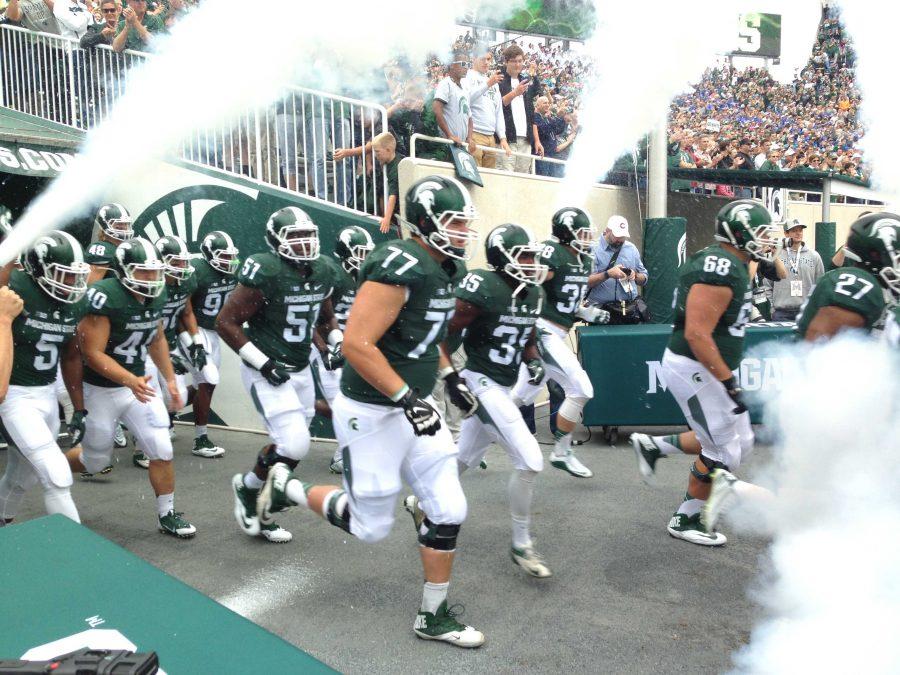 EAST LANSING — The seventh-ranked team in the country claimed the Old Brass Spittoon for the seventh-consecutive year, overpowering the Indiana Hoosiers 52-26.

“Connor has done great things for us during his career,” co-offensive coordinator Dave Warner said. “We asked him to put the team on his shoulders for three quarters. He’s played good the past few years, but these past couple of weeks he’s been phenomenal.”

Battling terrible weather conditions, and a hard hit to the ribs, Cook indeed put the Spartans on his back, dropping throws into tight coverage all afternoon.

“The zone” might be an understatement, as the senior has played on another level for the past three weeks — starting with the cold night in Piscataway, New Jersey.

“I felt like I was on the money,” Cook said. “Ever since the Rutgers game, I feel like I’ve been throwing the ball differently. I don’t know what it is, but it feels better. The spiral, the release, everything feels better.”

Cook’s monster day came short however in one category: most passing yards in a game in Michigan State history.

His 398 yards through the air nearly tied Bill Burke’s record of 400 yards against Michigan in 1999. However, the numbers proved to be a career-best, and it was the most yards a Spartan quarterback has thrown against an Indiana defense in history.

“I was heated,” Cook said jokingly. “I was so mad. I wanted to get the record.

No I’m just kidding. I could throw for 15 yards and I wouldn’t care, as long as we win. That’s all I care about, winning.”

Despite the incredible performance from Cook, it was not all roses for the Spartans.

We’ve been in close games before, and in this case we needed to distance ourselves, so it goes back to us being in these situations. We’ve learned how to win.”

Heading into the fourth quarter, Michigan State clung to a 28-26 lead, but with an explosive surge from the running game the Spartans galloped away, remaining unbeaten and improving to 8-0.

The Spartans outscored Indiana 24-0 in the fourth quarter, while notching 161 total yards compared to 29 for the Hoosiers. Michigan State’s dominance in the final 15 minutes proved to be a key factor in the ball game since Michigan State controlled most of the time on the clock in that quarter. Overall, the Spartans held onto the ball for nearly 40 minutes of the 60 minute ball game.

The Spartans will have a bye week before heading to Lincoln, Nebraska on Nov. 7, to take on the Nebraska Cornhuskers (3-5). Kickoff will be scheduled for either 7 p.m. or 8 p.m. ET.