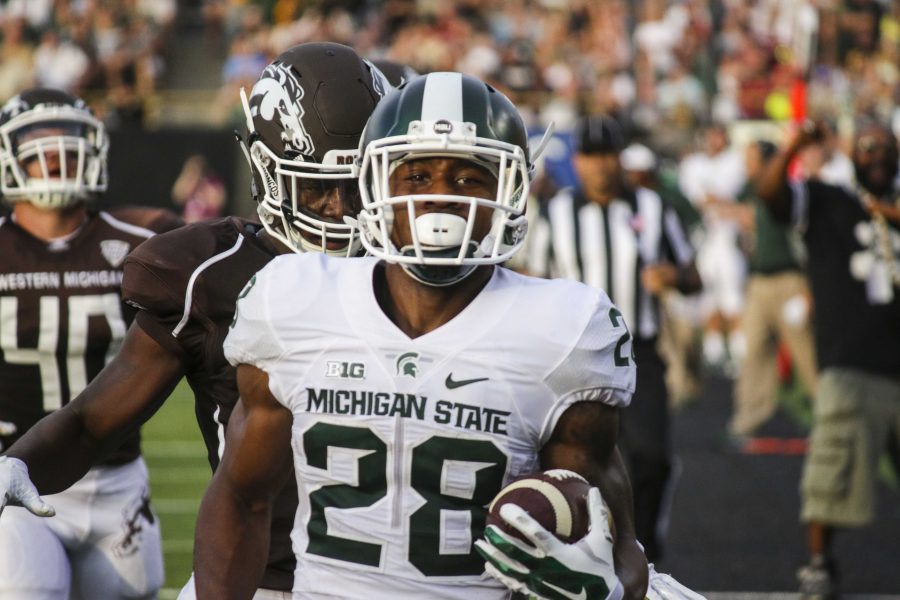 East Lansing – After stunning Michigan last week, the seventh-ranked Michigan State Spartans head back home to host the Indiana Hoosiers (4-3) in another rivalry matchup – the Battle for the Old Brass Spittoon.

Granted this rivalry is not at the same level as the Paul Bunyan Trophy, but nonetheless Michigan State gears up for another week putting last weekend out of their minds.

“It’s all about handling success,” head coach Mark Dantonio said. “After big games we’ll paint the picture of what we have been, and the standard that is expected.”

“The worst thing we can do is fall backwards. We need to continue to move forward,” Dantonio said. “Our dreams are ahead of us. They start this Saturday. So I think our players will be ready to play.”

Michigan State’s dreams, hopes and aspirations are still intact after the miracle play that is known as “Rangers: Mission 4:10.” The same attitude is in full swing around East Lansing. Play one game at a time; win one game at a time, and then all the puzzle pieces will fall where they need to land.

“I think the only argument that needs to be made is in the last week of the College Football Playoff poll, personally. That’s the bottom line,” Dantonio said. “All that other stuff is talk. It’s just something to move around and talk about it. From my perspective, what we do at the end of the season and November is really what’s going to set us apart.”

The Indiana Hoosiers are the next team standing in the way of the Spartans. Full of grit, it seems the team from Bloomington takes any opponent down to the wire. Three weeks ago, the No. 1 Ohio State Buckeyes needed to come up with a huge defensive stop to win the ball game 34-27. With starting quarterback, Nate Sudfeld leaving the game with an injury, second string QB Zander Diamont almost led the Hoosiers to an improbable victory over the Buckeyes. Then last week the Hoosiers couldn’t outscore the Scarlet Knights from Rutgers – falling in a shootout 55-52. Downfall in last week’s bout was Indiana failed to finish the game, giving up a 25-point cushion.

Heart is Indiana’s M.O. Whoever they line up against, a full 60-minute game is to be expected.

However, the Hoosiers are on a three-game losing streak. Starting out fast going 4-0 to begin the year, Indiana has dropped three straight. Losing to Ohio State, Penn State and Rutgers consecutively. However, at the bottom of the Big Ten East, Indiana can play the role of spoiler. Upset alert can be announced at any moment during the game, and spoilers happen frequently.

“The next bout, and the next challenge is Indiana. I hope our players – after the success we’ve had around here – understand the only thing that matters,” Dantonio said. “Get there at the end. But to get there you need to work hard, have perseverance, and conviction. And it has to be every single week.”

“That’s the culture we have. So I would be extremely disappointed if we didn’t come to play. That doesn’t mean we’re going to win. What that means is we are going to come emotionally ready to play and go from there,” Dantonio said.