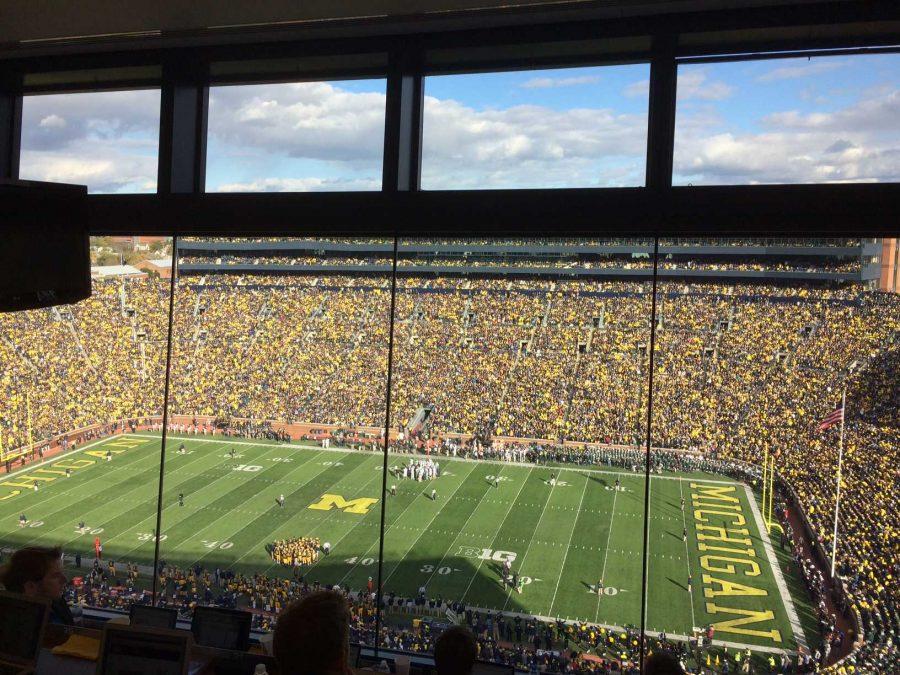 A fluke is defined as a stroke of luck.

After this past weekend’s Michigan State win over Michigan at the Big House, you did not have to dig too hard to see that MSU’s win was called a fluke. Whether it was Bleacher Report and Yahoo Sports saying Michigan State got lucky, turning on the TV to ESPN calling it a miracle, or just your old high school friend who now attends the University of Michigan ranting on Twitter about how the Spartans did not deserve the win.

Yes, Michigan’s punter Blake O’Neill should have just fell on the ball after he dropped the snap. However, there was more to this play than just a loose ball falling into the Spartan’s hands.

The now infamous punt block returned for a touchdown with 10 seconds was named “Rangers: Mission 4:10,” by head coach Mark Dantonio. That begs the question, how can you name something that was just a “fluke?”

Before we get into that, let’s go back in history to the first “fluke” play under the Dantonio regime, “Little Giants.”

“Little Giants” | September 18, 2010
Michigan State is down three in the first overtime to the premier program Notre Dame. Sophomore kicker Dan Conroy lines up to take a 46-yard field goal on 4th and 14 to tie the game. As the ball is snapped the unexpected happens. The holder, senior punter Aaron Bates, takes the snap and stands up to make a pass. That is when the confused Fighting Irish leave senior tight end Charlie Gantt wide up for a score to end the game 34-31 Spartans.

“Rocket” | October 22, 2011
Michigan State, ranked No. 16 is tied 31-31 with No. 6 Wisconsin, led by future NFL quarterback and Super Bowl champion Russell Wilson. MSU quarterback Kirk Cousins and the Spartans line up on their own 44-yard line. Cousins, with time to throw, launches the ball to the end zone where it is tipped by Wisconsin’s Jared Abbrederis, off the chest of MSU’s B.J. Cunningham, right into the hands of quarterback-turned-wide receiver Keith Nichol. The crowd goes wild as it looks like he is in for the score. However, to MSU’s dismay the referees initially called Nichol down just short of the end zone. After what seemed to be the longest two minutes in Spartan sports history, the call was overturned. The ruling of a touchdown immediately ended the game, and the Spartans raced to the student section to celebrate. That play was named “Rocket.”

January 1, 2014
It is the 100th Rose Bowl. No. 4 MSU, No. 5 Stanford, and Stanford is a 6.5-point favorite. Stanford down by four is marching down the field with just under two minutes to go. It is fourth and one and the Spartan’s do not have senior middle linebacker Max Bullough. With two fullbacks and one of the top running backs in the nation, Tyler Gaffney, it is a clear a run up the middle in coming. The ball is handed to the Stanford fullback, but only to be stopped by a leaping walk on linebacker and Bullough’s replacement, Kyler Elsworth. The Spartans kill the clock and win the 100th Rose Bowl game.

“Rangers: Mission 4:10” | October 17, 2015
No. 7 Michigan State versus in state rival No. 12 Michigan. After a rough season the previous season, it seems U-M is already excelling with new head coach Jim Harbaugh. With 10 seconds left and the Spartans down by two, Michigan goes to punt it away to seal the victory only for the punt to be broken up and flung right into the hands of special teamer Jalen Watts-Jackson who ran roughly 35 yards for the touchdown.

What do these four plays have in common? They were all drawn up by Dantonio. Even last Saturday’s last second score. Michigan State rushed 10 men to try to block the punt and did not have anyone back for a return. And on the other side of the ball, Michigan did not bring their gunners in to help block. According to Dantonio, this allowed Matt Morrissey, another special teamer, to make the initial hit on the Wolverine punter and also allow Jermaine Edmondson to make the first block for Watts-Jackson, giving him a more clear path to the end zone. The coaching staff and players were able to read the scheme on the field and execute accordingly.

It is these late game heroics that define Michigan State’s football program. It is the culture coach Dantonio has engraved into this team and school about never quitting the fight. To say last Saturday was a single stroke of luck would be wrong. Just look at the team’s past.

This was not the first time and nor will it be the last that Sparty has some trick up their sleeve and it definitely will not be the last time you see this team fight until the clock strikes zero. With every big play comes a big moment and an even bigger hero. You never know who the next Bates, Nichol, Elsworth, or Watts-Jackson will be. And it is these players that are the inner makeup of a true Spartan team.

So I ask again, what fluke?