OPINION: First Introductions to the Rivalry 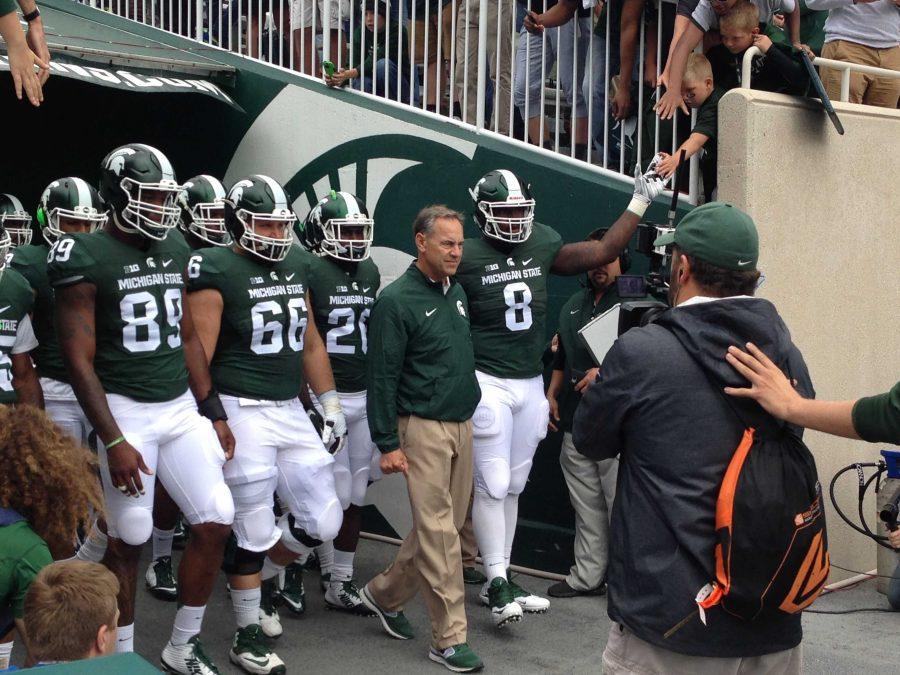 It is more than the game itself. It is greater than the final score. It is bragging rights.

There are 365 days until “next” year. Brutal, physical hatred for one another is the root of every single rivalry. There is no love lost between one another. Even the schools’ colors make the counterpart physically ill. Competing for in-state rights. Two schools fighting for pride. A rivalry is everything.

It is an annual rush between Michigan and Michigan State. It is a ritual like no other. For one week every year the two schools take part in a war. The week of fury leads to 60 minutes that will ultimately last for the entire year.

Green and white versus the maize and blue.

State supremacy is on the line every year between the Spartans and Wolverines. Legacies are created, and misery is swallowed. History is made. The Battle for Paul Bunyan is one of the fiercest rivalries in all of college football, and this past Saturday the historic game added a new chapter.

If any individual has a pulse for college football, this matchup needs to be on their bucket list for games to attend to. The rivalry game began in 1898 and the two schools have met almost every year since 1910. The trophy of Paul Bunyan was first presented in 1953 by Governor G. Mennen Williams to commemorate Michigan State’s entrance to the Big Ten Conference in 1950.

Standing at 4-feet tall, Paul Bunyan seemed to be an eyesore for the Wolverines at first. When Michigan first defeated the Spartans while the trophy was on the line, Michigan decided to place Paul Bunyan in an equipment closet deep within Michigan Stadium. That was only after the trophy was left on the field for half an hour before begrudgingly accepting it.

Even though the Wolverines won in 1954 and 1955, Michigan did not engrave their scores into the trophy. Michigan State eventually updated the history in 1956. For years Paul Bunyan was neglected, and despite the rocky start, both Universities take great pride when claiming the trophy.

Historically, Michigan has dominated this series, leading the overall head-to-head 68-35-5. When the two schools are compared in regards to accomplishments – Michigan wins in a landslide. However, in recent years Sparty has been able to laugh at last – winning seven of the last eight meetings – including this past weekend’s miraculous shocker in the Big House.

A dark storm has loomed over Ann Arbor since 2007 – a pivotal moment in the rivalry. Except no one had any idea how ferocious the storm would be.

New Michigan State head coach Mark Dantonio solidified a new culture in East Lansing after the 2007 loss. His words – “Pride comes before the fall” – will be echoed for eternity. Dantonio established a new identity within the program after former Wolverines running back Mike Hart uttered the now infamous “Little Brother” comment. Should Hart be to blame for the complete turnaround in this rivalry? His comments certainly sparked a fire in every Spartan’s heart – especially the man leading the charge – Dantonio.

Since then, the Spartans have owned the rivalry. Of course, this year’s bout proved to be a dagger in the heart for any Michigan alumni or fan. Arguably considered the greatest play in college football history, the loss for Michigan will burn for quite some time.

I am from New York, where there has never been a dominant college football team. The Donovan McNabb era at Syracuse was the only time true college football was represented in New York. The Carrier Dome is the house Jim Boeheim built. It was and will always be a basketball town. The Orange has no true rival in football. How can they? The hatred for UCONN and Georgetown was spectacular during the golden years of the Big East. Except those days are long gone with the bitter breakup of what was the greatest college basketball conference.

That being said, the first time being amidst this vicious Michigan rivalry – I was a kid in a candy store. Growing up as a diehard college football fan, moments like last week were the ultimate. Hearing the stories and speaking with fans pumped me up and growing up I never had an allegiance with either team. Then tagging the statues began. The trash talking ensued, and eventually GameDay arrived.

The atmosphere was out of control. The hype was real – from both sides. Random students yelling at one another, “Go Green” or “Go Blue” seemed natural behavior on the chilly fall day.

What to say about the Big House? It is ungodly big. As if the modern day Coliseum was planted on campus in Ann Arbor. So much passion and devotion to one’s own school makes this rivalry  at the top of the list.

All the traditions unveiled themselves throughout the course of the game. There was so much pride in the stadium. It was as if a bathtub was filled to the brink with water and the water kept overflowing. The amount of love for one’s own school was the same way. It spilled out into the streets. I could feel the intensity. It was like an earthquake shook the stadium for three hours.

Of course the ending could not have been scripted. It was a fairytale ending to an incredible week for Spartan fans, as well as college football geeks like myself. For Wolverines everywhere, this game will be tough to accept.

No matter what, this game will go down in the history books. Afterwards people came up to me wondering what I thought about the game, curious about my first experience with the rivalry. I could not muster any words.

‘Incredible’ was the only thing I could come up with after searching for an answer.

However, in my mind, four words kept resurfacing – ‘Welcome to the Show.”