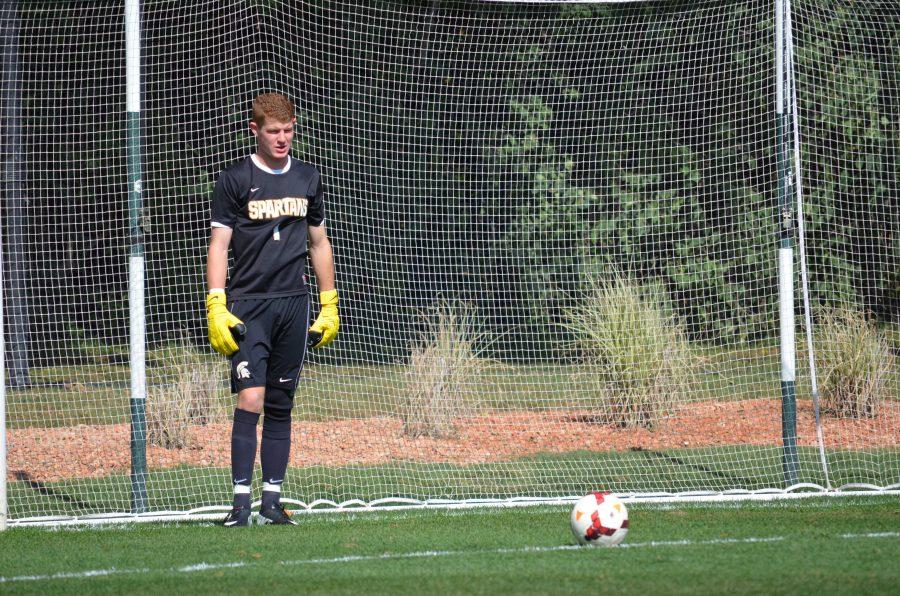 EAST LANSING – On a cold Senior Day at DeMartin Stadium, it was a Michigan State freshman that would be the difference as the home side continued their late-season resurgence with a 2-1 win against Penn State.

In what was a very tight tussle throughout, it was down to a Connor Corrigan diving header with two minutes remaining to snatch victory for the Spartans.

Both teams battled for control of the game throughout the opening half, Penn State looking the better of the two early before MSU battled back to create a few chances of their own.

MSU goalkeeper Zach Bennett was kept occupied in goal throughout the opening 45 minutes, though none of Penn State’s eight shots truly troubled him. On the other hand, the best chance of the half fell to midfielder Jason Stacy who gathered possession of a loose ball, but put his shot just wide.

That came after a promising build-up found its way to Corrigan whose cross was initially saved by Nittany Lions’ goalkeeper Matt Bersano before Stacy’s shot.

The half ended with neither side finding the back of the net.

That soon changed after half time as Michigan State opened the scoring just 2:27 into the second half. Stacy scored his second goal of the season after he pounced on an errant pass by Penn State senior Drew Klingenberg.

With very little pressure around, the Nittany Lions looked to work their way out of defense, but were not counting on the clever reaction by Stacy.

“Credit to Jason Stacy, I thought he scored a great goal to open up a great steal and great finish,” MSU head coach Damon Rensing said.

Klingenberg would be back in the action just moments later, this time at the right end of the pitch. He put in a low cross that was promptly stopped by Bennett.

However, Bennett was left lying on the ground helpless as PSU junior Christian Kaschak gathered the rebound and easily slotted his shot past the Spartans’ netminder.

“You tend to want to relax a bit when you just get the lead when that’s the exact opposite of what you want to be doing,” Bennett said.

All that set the stage for freshman Corrigan to deliver the winning goal. With the game on the verge of extra time, Michigan State sensed the urgency and pressed for the victory.

“I just got into the box and tried to make something happen,”Corrigan said. “Ryan was able to flick one on and I was able to put it in the back of the net.”

“The real key was towards the end. It looked like we were the team that wanted to win the game,” Rensing said. “It was a great win…winning home games in the Big 10 have been hard to come by for any team.”