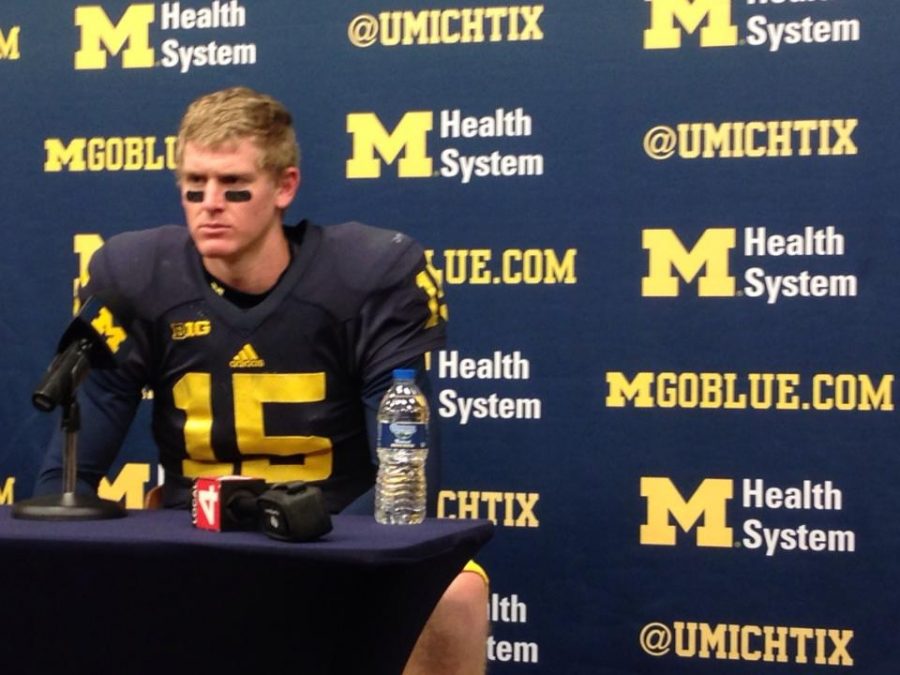 ANN ARBOR – The Spartans snatched victory from the jaws of defeat on Saturday evening, coming from behind to a 27-23 victory in the final play of the game. The Wolverines never trailed during the highly anticipated rivalry game until the clock read 0:00.

On 4th and 19, Connor Cook was unable to complete a pass for a first down and Michigan Stadium erupted to what has to be the loudest it has been in nearly a decade. The Wolverines rising to a football powerhouse was complete. Michigan was to run out the clock, handing the Spartans their first loss of the year. The celebration was on.

The Wolverine defense did play good enough to win. So did the Wolverine offense. And so did Michigan’s special teams, until the very last play.

With 10 seconds remaining and a two-point lead, Harbaugh sent out his punter to ice the game. The Spartans had lost the special teams battle all day. From mistakes on kickoffs, short punts and the failed fake-punt, it appeared as though special teams would cost MSU the game. Then, when everybody thought the game was over, the MSU special teams capitalized on U-M’s only mistake on special teams to win in spectacular fashion.

Michigan’s Blake O’Neill failed to field a low snap, and then failed to recover the football that was muffed. The ball landed miraculously in the hands of Spartan safety Jalen Watts-Jackson as he trotted into the end zone as time expired.

“The snap was low, just below the knees and [he] didn’t field it cleanly,” Harbaugh said. “It was very unfortunate.”

“Unfortunate” is the understatement of the year. For Wolverine fans, the result is absolutely heartbreaking.

The Wolverines had not let up a touchdown since Sept. 19. On Saturday, Michigan State scored three touchdowns on offense. But it was the late special teams touchdown that transformed a surely 6-1 team to a 7-0 team in the blink of an eye.

Jim Harbaugh is the seventh consecutive Michigan coach to lose his first game against Michigan State. Hard to imagine the previous six had a tougher loss than Harbaugh.