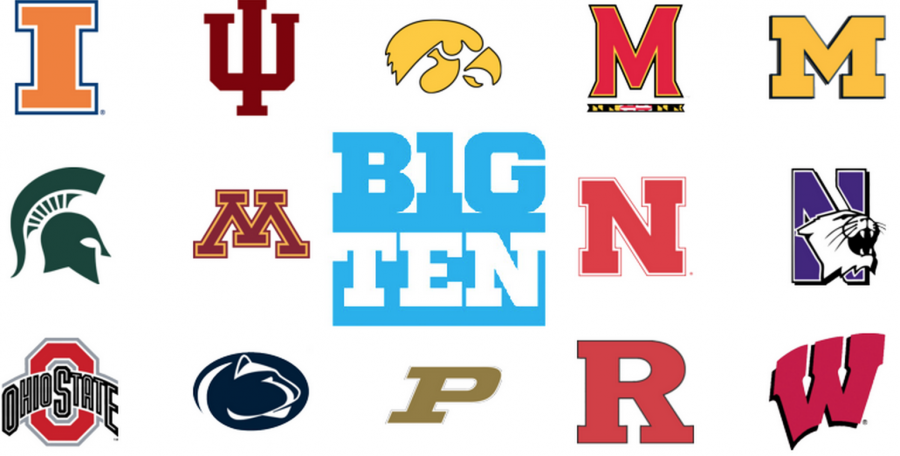 As the second week of Big Ten play winds down, three teams remain undefeated. Michigan State and Ohio State lead the East, tightly pursued by the Wolverines. In the West, Iowa declared themselves the sole leaders, followed by pretty much everyone not named Purdue.

Here are the Big Ten power rankings for Week 6:

Have the Bucks struggled? Yes. Have they proven themselves as the outright best team in the conference? No. That does not matter. What does matter is that the Buckeyes are the most talented team in the nation, and while it has been close, they have yet to lose a game. The Turps fought valiantly against the top team in the country– limiting former Heisman front-runner, Ezekiel Elliot, and tying the game up in the third quarter. Unfortunately, Maryland could not keep up with the talented and more disciplined Buckeyes. When Ohio State needed to make key plays, they did, and that is the sign of a great team. The Buckeyes’ determination and will to win is incredible, and until they lose, it will be difficult for anyone to dethrone Ohio State from this list.

The Spartans have struggled greatly against teams they should be blowing out, and this week was certainly no exception. Look though, they are in the same boat as Ohio State. They are one of the most talented and best-coached teams in the country.

They have yet to show their dominance, especially considering their “signature” win was against an Oregon team that is currently unranked. However, with the many weapons MSU has, they still remain a playoff threat. Everyone on the team has made clutch plays when they needed to (the term “everyone” applies to all 99 players on Michigan State’s roster except Michael Gieger). How else could have they survived through six close games, still remaining unbeaten? If the Spartans ever hit their potential (and get healthy), watch out. They will be a force to be reckoned with, but until then, MSU remains unimpressive. Still, when it comes down to it, MSU is perfect in the most important category. Until MSU loses, they will not move down on this list.

The Wolverines continued their dominant play, even through the highly anticipated matchup against Northwestern. The Michigan defense completely dismantled the Wildcats, bringing them to their third straight shutout. Although it is worth mentioning that Northwestern played an awful game, partly why Michigan was so dominant, there is no doubt that the Wolverines have improved an inconceivable amount since the beginning of the year. This is not the same team that lost to Utah in Week 1. DeVeon Smith has proved himself as an elite back, Ruddock is improving every week and the defense has become impeccable. The Wolverines will have a huge chance to prove themselves next week as they play Michigan State at the Big House. This is about to be the beginning of an all-out war between Harbaugh and Dantonio.

The Hawks remain as one of the three unbeaten teams in the Big Ten, and are trying to prove that they have what it takes to play at an elite level. Although Iowa is not “elite” quite yet, they have certainly shown their skills thus far, especially in Week 6 against Illinois. Jordan Canzeri ran for 256 yards with two TD’s on a mind boggling 43 attempts. Kirk Ferentz seems to be running an old style football program with his run-first offense, along with a powerful, hard-hitting defense. The 6-0 Iowa Hawkeyes are establishing themselves as the most dominant force of the West. Watch out for them in Indi this coming December.

The Wildcats are lucky that they had been so fantastic going into their matchup with Michigan, because on Saturday, they looked like a high school team. Their performance against the Wolverines was one of the worst of any Big Ten team so far. Northwestern gave up nothing but big plays, starting from the very first kickoff that was returned by Michigan for six points. The Wildcats’ defense continued to give up massive plays leaving giant holes in their defensive line and leaving men wide open downfield. Many offenses have struggled against the stifling Wolverine defense this year, but one would think that the No. 13  ranked Wildcats would have found a way to cash in at least three measly points, but it appeared that Northwestern gave up right from the start. So if all this is true, why is Northwestern still ranked No. 5? I believe this program has been knocking on the door for a very long time to take the next step, and their difficult non-conference schedule has shown me that this could be their year. Northwestern is capable of much more than what they showed against Michigan and they are still very much in the hunt against Iowa for the Big Ten West, but they cannot let this loss shake them. One loss must never turn into two.

There was lots of hype surrounding the Nittany Lions from the start of the year, and with the exception of Week 1 against Temple, Penn State has lived up to expectations. In spite of injuries and offensive line troubles, Penn State has found ways to put up points. Christian Hackenberg has made a strong case for himself as one of the better quarterbacks in the nation, throwing for 262 yards and two touchdowns toward nine different receivers in Penn State’s win over Indiana. The Lions also had seven different men gain yards on the ground, showing their depth within the running back and receiver positions. Penn State will have a huge opportunity to spoil the Bucks’ perfect season next week in Columbus, and with Penn State having their first full recruiting class since sanctions have been lifted, Penn State is on the rise and should be back soon.

Talk about clutch. The Badgers beat Nebraska with a last second field goal hit by Rafael Gaglianone just after he missed a go-ahead field goal that hit the upright. This was a huge win for Wisconsin, lead by Dare Ogunbowale and Joel Stave putting Wisconsin in contention to reach Indianapolis. Wisconsin football may appear to be on the decline, but do not count them out. The race in the Big Ten West is wide open and with this win, Wisconsin has as much of a chance as anyone.

All things considered, Wes Lunt and the Fighting Illini played well against a tough Iowa defense. Injuries have scarred the Illinois receivers, and a poor O-line caused many sacks and few rushing yards. However, this did not stop Lunt, who still managed to throw for 317 yards, and almost single-handedly carried Illinois. The Illini have not been fantastic, but are still managing to put something together in a place where fans have not had much to cheer about in a long time. Thus far, they have put up respectable wins against North Carolina and Nebraska, while giving the unbeaten Iowa Hawkeyes a run for their money. If the Illini were healthy, they could likely be doing better than they are now. .

Minnesota’s domination against Purdue could not have come at a better time. This offense needed a huge confidence boost after a devastating loss to Northwestern the week before, and that is exactly what they got. With only 18 pass attempts in the Gophers’ 41-13 victory against the Boilermakers, Minnesota relied heavily on the run, with multiple backs making huge plays. Of course, none of these backs were more important than Shannon Brooks, who recorded 176 yards and a touchdown. The Gophers’ offensive line stepped up for a desperate offense averaging just above 15 points a game heading into Saturday’s contest. Hopefully this success will continue into next week for the expected thriller against Nebraska.

With a brand new coaching staff, the Cornhuskers were bound to struggle, but to lose three games on last-second plays? That is just rough. Tommy Armstrong and the Nebraska offense seem to have chemistry, but that means nothing if you cannot finish games. Remember, Ohio State has struggled. Michigan State has struggled. Yet both of these teams remain unbeaten. Why? They finish. MSU’s performance against an awful Rutgers team was bad, but when it came down to it, they made big plays and won. This is exactly what Nebraska needs to do, but their lack of ability to be explosive  in the final moments of play is putting them at 0-2 in the Big Ten.

While the Hoosiers had strong non-conference play, their blowout loss against Penn State proves that this team cannot play above a mediocre level. Granted, injuries in the backfield have not helped, but Indiana could not do a thing on either offense or defense. Indiana may be on pace to have a better-than-average year, but this loss proves that they are far from competing with many of the better teams in the conference.

Good news, they almost beat No. 4 Michigan State. Bad news, so has everyone else. They did do a good job confusing MSU’s offensive line by showing signs of blitzes, but again, it is difficult to credit them for doing what everyone else already had. When it comes down to it, Rutgers’ poor performance on and off the field has caused a lot of grumble for Big Ten fans who are unhappy to see the Scarlet Knights as the newest member of the conference.

After getting bulldozed at home by Minnesota 41-13, the Boilermakers now fall to 1-5. Oh boy. This is going to be a long year for Purdue. You know what might help? Not throwing away the football. Both David Blough and Austin Appleby have more interceptions than touchdowns, so there is plenty of room for improvement in Purdue.

Head coach Randy Edsall has officially been fired. Switching coaches in the middle of the season is always difficult, and the last thing a struggling Maryland team needs is internal problems. Unfortunately, internal problems are exactly what the Turps have. We will see what happens down the road for Maryland, but do not expect them to improve any time soon.

Andy Chmura is a multimedia journalist for Impact Sports.