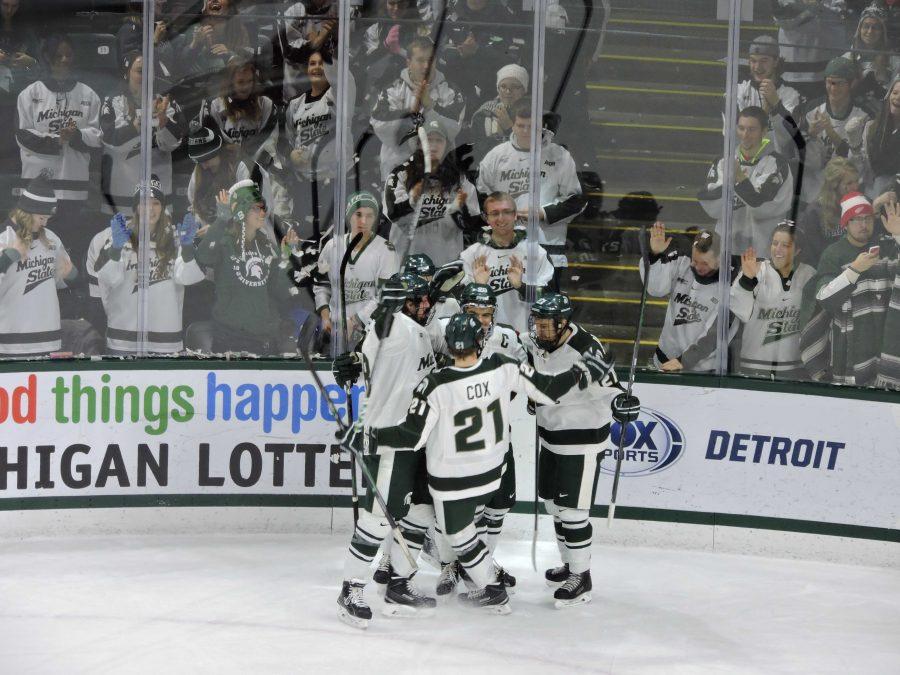 [su_pullquote align=”right”]”MSU now starts the season with a 1-0-1 record, its first undefeated start since 2010.”[/su_pullquote]While Michigan State fell short of a weekend sweep, they left Maine unscathed and undefeated for the first time since 2010. The Spartans’ offense broke through for seven goals (four on the power play) and powered MSU to a tie and a win in the 2015 Icebreaker Tournament.

On Friday, Michigan State battled the host Maine Black Bears to a thrilling 3-3 tie. The Spartans trailed three times in the game and battled back thanks to an emerging power play. The Spartans and Black Bears traded power-play goals in the first period courtesy of senior Will Merchant for Maine and freshman Zach Osburn for MSU. Maine would regain the lead at the 10:40 mark of the second period when junior Brian Morgan found the back of the net at even strength.

The Spartans stormed back in the third period though, once again cashing in on the power play, when junior Joe Cox netted his 11th career goal. Blaine Byron’s short-handed tally midway through the third put Maine back in the driver’s seat before Osburn again answered with a power play strike with under two minutes remaining. Overtime yielded no clear winner, though Maine did win a tournament sanctioned shootout 1-0.

[su_pullquote]”We faced some adversity this weekend and guys stepped up. For us, I think it was a really good team win and a confidence boost.”[/su_pullquote]Eager to get their first victory of the season, the Spartans next faced former CCHA foe Lake Superior State. Unlike Friday night, MSU drew first blood after a shot by Michael Ferrantino bounced right back to him and the senior captain buried his first goal of the season. The Lakers would respond later in the frame after a blown defensive coverage left Laker forward Gage Torrel alone in the slot. Torrel made no mistake on the one-timer and tied the game 1-1.

Heading into the second period Lake Superior State made a strong push, but it was junior Mackenzie MacEachern who found the back of the net on the power play to make it 2-1 MSU.

The Spartans then pulled away in the third period. MacEachern earned his second goal of the game after he redirected a John Draeger slap shot just 12 seconds into the frame. Junior JT Stenglein would add another goal for the Spartans late in the game, his fourth point of the season.

“We faced some adversity this weekend and guys stepped up,” MSU coach Tom Anastos said to MSUspartans.com. “For us, I think it was a really good team win and a confidence boost.”

Overall, six Spartans had multi-point weekends (Stenglein, Thomas Ebbing, Osburn, MacEachern, Cox and Mason Appleton) and over half of the team earned a point over the course of the series. MSU now starts the season with a 1-0-1 record, its first undefeated start since 2010.

The Spartans face a tough road series as they travel to Denver to face the No. 5 Pioneers.