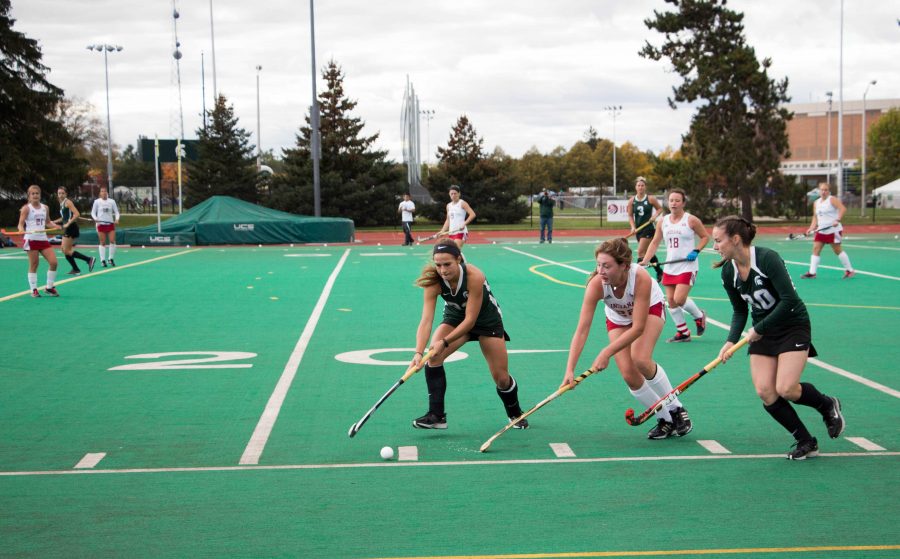 EAST LANSING – Things were quiet at Ralph Young Field – a little too quiet – so Indiana and MSU decided to ignite an exciting game after 10 minutes of hard defensive play.

Indiana took the first goal halfway into the first half following a failed penalty corner shot, upping the score to 1-0. MSU responded to IU’s goal just a minute later with an assist by freshman Bailey Higgins and the goal by sophomore forward Sophie Macadre.

Macadre went into this game with a team-high 17 points on the season, recording six goals and five assists over 12 games played.

With 13 minutes left in the first half, a battle of defensive play turned into a hard-fighting tied game.

For the few opportunities they had to score, MSU took advantage of them. Senior Heather Howie scored with an assist from senior Mallory Tyler, putting the Spartans up 2-1 in the first half. The Spartans left the game with seven shot attempts, while Indiana had 17.

Five minutes of playing time was just enough for IU’s Maddie Latino to get into the net again, leaving the score tied. The last minutes were left unanswered by both teams, so it was left to overtime.

Not for long, however.

Over a minute into overtime, sophomore Adrea Donaldson saved her team from a loss, and a lot more running up and down the field. It was Donaldson’s first-ever game winning goal.

“Once I saw it go in I just couldn’t keep a smile off my face,” Donaldson said. “[The team hasn’t] really gotten the result we wanted, but we finally got our result.”

The game ended with a 3-2 score, the Spartans beating Big Ten opponent IU.

After losing a 2-0 lead last weekend, MSU was looking for a way to redeem their 3-2 loss against Pacific.

Head coach Helen Knull acknowledged the improvements the team has made.

“[We have made] huge strides with our possession, ability to work the ball up the field,” Knull said. “Defensive corners was a big improvement today.”

“I think we hustled really hard. We kind of had to change up our game plan a little bit because we were missing one of our players in the back,” Macadre said. “I think it really shows how determined we are as a team.”

MSU returns to play at Ohio University on Sunday, Oct. 11 at 1 p.m.