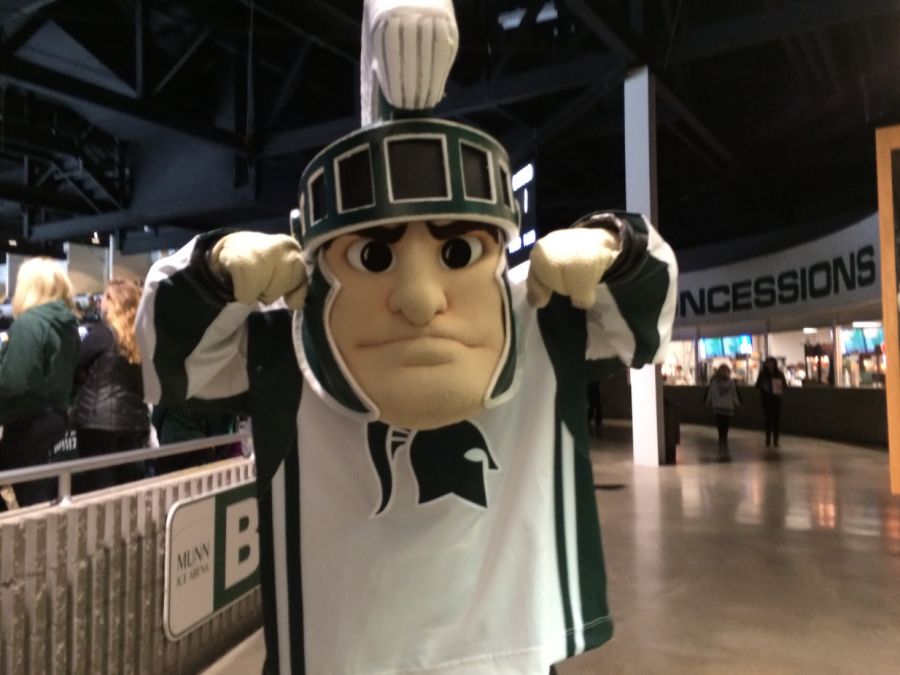 Sparty is pumped for the start of hockey season. Are you?

In front of 1,800 fans and a whole lot of students, Michigan State outlasted Western Ontario 2-1 in exhibition play Sunday. The Spartans had both exquisite and sloppy plays, but found a way to win.

A minor consideration, but if MSU is going to go anywhere this year, they need stout goaltending from the get-go. Aside from a fluke power play goal by the Mustangs, goaltender Jake Hildebrand was solid throughout. Through two periods of play he stopped 14-of-15 shots sent his way.

Ed Minney came in for the start of the third period and looked good, although he only saw three shots. Goaltending does not look like it will be an issue for Michigan State any time soon.
[/su_box]

No bones about it, MSU just looked out of place at times in the neutral zone. The passing was not crisp or on the tape. The puck was bouncing over players’ sticks. You could tell this was the Spartans’ first game of the season. Still, MSU only have had one full practice, so this is only a minor concern.
[/su_box]

When you are 0-for-7 on the power play, that tells me that you either do not practice it often or are just not good at it. Turns out the former is true in this case. Still, MSU churned out 16 shots on the powerplay and came very close to scoring near the end of the game. The Spartans got markedly better as the game went on.

The same can be said for MSU’s penalty killing. MSU’s first PK of the game wound up in the back of their net. Ensuing kills by the Spartans looked more and more like last year. I would expect special teams to be a big emphasis this week heading into games against Maine and Lake Superior State.
[/su_box]

All four freshmen that suited up for MSU had a noticeable and positive impact on the game. In addition, all four of them registered multiple shots on goal. Cody Milan picked up the game’s first goal after a pass from Justin Hoomaian and went bar-down on Peter Delmas. Mason Appleton looked strong on the puck and made some plays. Brennan Sanford (on line with Milan) played his tail off and was nearly rewarded with a goal. Finally, Zach Osburn lived up to the hype of a slippery defenseman with soft hands.

All of these new kids are playing with confidence and a work ethic that’s fun to watch. This group looks like it can collectively have a big impact on this team. A step forward from last year’s class which collectively did not even manage a single goal.
[/su_box]

I have been wondering for years when Tom Anastos and the Spartans were going to up the ante with their strategy and play a more speed and possession type game. Judging by Saturday’s small sample size, it looks like this is the year. While it was at times sloppy, you could tell MSU was trying to possess the puck more in their zone and in the neutral zone than in years past.

In theory, what MSU is trying to do strategically is mimic the Chicago Blackhawks. Possession in the defensive zone, a quick pass or rush through the neutral zone, then enter the attacking zone with possession. It will take a few weeks for this team to fully grasp this new scheme, but it should pay dividends later on in the season.
[/su_box]

Anyone who thought that the offense would come to life magically at the start of the season was kidding themselves. It is going to be a process. That said, 41 shots against any opponent is impressive and cannot be overlooked. Michigan State had plenty of opportunities that they just could not bury weather it be by a mistimed shot or an outstanding save. The score could have been easily 4-1 or 5-1 Michigan State.
[/su_box]

[su_box title=”Defense looked alright” box_color=”#e54e53″ radius=”0″]
Questions are abound with the Spartan defensive front. Not only did they lose Jacobs in the offseason, but Jerad Rosburg is also out for the season with an injury. From what I saw with the defense, they looked okay. They were not exceptional by any means, especially the timing of the forwards, but managed to survive pushes from a Mustangs team who desperately wanted a win.

Offensively, four of the six defenseman registered at least a shot on goal, and Travis Walsh netted the game winner early in the second period. If this group can continue to play solid and stay healthy, good things are in store.
[/su_box]

Weather you are a fan of blocking shots or not, you better get used to it. The Spartans finished the day with 12 blocked shots, many of which came on the penalty kill. While blocking shots is useful strategically, they can lead to some bad injuries. Walsh is a prime example. MSU should be careful with blocks because this defensive corps can not afford any more injuries.
[/su_box]

I would be remiss if I did not mention the throngs of students who came out to witness MSU’s first action of the season. Of the 1,800 who came to Munn, more than half of them were students. Lines stretched out the door and into the woods across from Dem Hall.

While the rest of Munn was sparsely filled, the student section was rocking at full capacity. New jerseys were given out, Sparty showed up and the band was loud. Whether they came out for the free hockey, or the free pizza afterwards, the A-Team exceeded expectations for this game. Hopefully we will see similar student crowds throughout the season.
[/su_box]

Let’s not go all MSU football here and start saying this team is not good enough. The fact of the matter is they are coming off their first full practice and it showed.

Do they have wrinkles to iron out? Of course they do, but so does everybody else. It would have been nice to dominate Western Ontario, but the Mustangs were coming off an embarrassing 6-1 loss to Miami-Ohio the night before. They gave the Spartans their best shot and the green and white was still standing.

The fact that MSU was able to handle an opponent’s “second wind” game while still out of sync tells me that this team knows how to win. This will prove critical as the season progresses and sweeps become necessities.

Michigan State will correct what needs fixing and be ready for this weekend. The 2015 season officially starts this weekend against the Maine Black Bears, and it cannot come soon enough.
[/su_box]