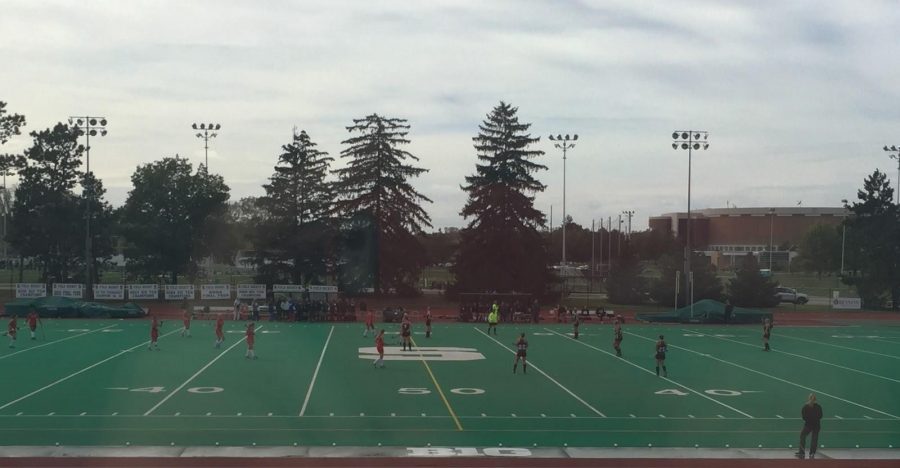 MSU head coach Helen Knull could not have been more proud with the result. Especially coming off five less than stellar games.

“The past five games we haven’t been getting the results and we’ve talked to the girls about the process,” Knull said. “Just believing in the process and in the game plan. I think today we were getting a lot of shots and a lot of opportunities to score. The difference today from the previous games is we didn’t panic, we kept believing in it, we kept executing.”

The goals would come easy in the first half.

Spartan Sophie Macadré scored her first of two goals 10 minutes into the game, but Scarlet Knight Rachel Yaney quickly scored off a deflection to tie the game at 1-1.

Off a corner, Heather Howie was assisted by Macadré to regain the lead for the Spartans.

After an MSU green card left the Spartans down a player, a Rutgers goal from Yaney would tie the game again at 2-2.

The first half ended in a tie, with Michigan State outshooting Rutgers 10-7. The game was very competitive, with each team answering every attack the opposition imposed.

A four-goal spree would get the second half going quickly.

Rutgers scored early off a goal from Nicole Imbriaco, but MSU answered quickly with another Macadré goal. Then, in the 42nd minute, Alyssa Bull scored the Scarlet Knights’ fourth and final goal. The game-tying goal would come soon thereafter from Spartan Kristin Matula.

That left the score tied at four, a high scoring game as far field hockey is concerned. That score would stay put for the remainder of the second half and first period of sudden death overtime.

The game-winning goal came with 10 seconds left in the second period of overtime. Macadré assisted a diving Megan Fenton to win the thriller for the Spartans.

“It was an adrenaline rush,” Fenton said. “It was really just a great build up from all the players. We just kept pushing, pushing and with 11 seconds left we put the ball in the net.”

Getting that first Big Ten win was vital for the team, according to Knull.

“This was kind of the ticket to the Big Ten Tournament, although we still have to take care of the next couple games,” Knull said. “I’m just glad that we stuck to the process and today the outcome came. I can see the confidence coming back into the team, and that’s what we have to build off of.”