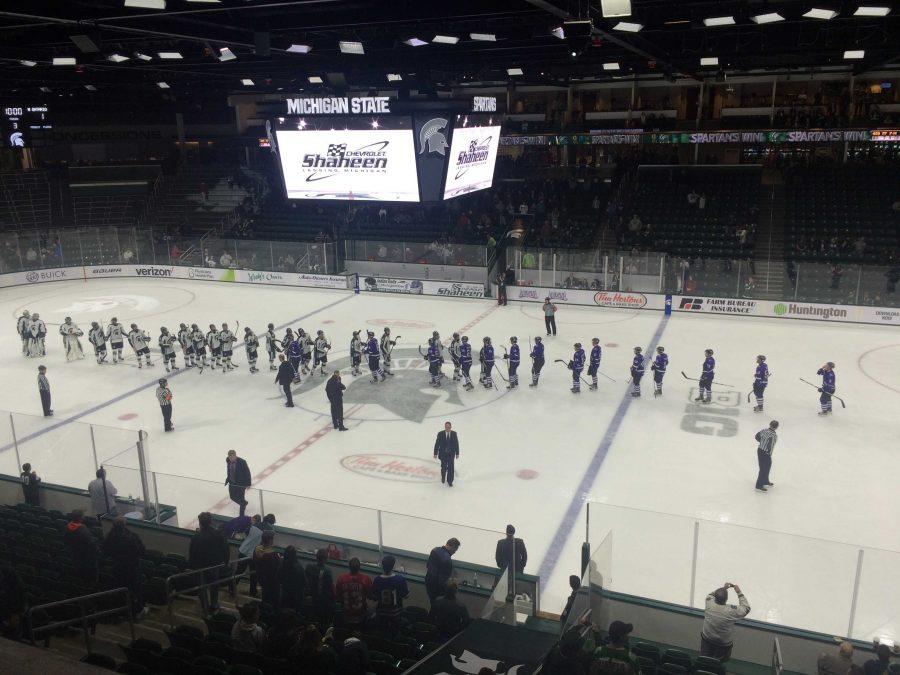 In their first competitive game since losing to Michigan in the Big Ten Tournament back in March, the Michigan State Spartan hockey team beat Western Ontario 2-1 in an exhibition game Sunday at Munn Ice Arena. Goals from freshman forward Cody Milan and senior defenseman Travis Walsh helped propel the Spartans to victory.

The Spartans came out looking fast and eager to play. They maintained a lot of the puck possession early, which paid off for them two minutes into the game. In his first game as a Spartan, Milan found the back of the net off an impressive pass from Justin Hoomaian. It was 1-0 Michigan State early.

“I definitely didn’t expect to score a goal like that,” Milan said. “But it definitely feels good. It was a great team effort tonight.”

It was clear that this was the first game in a while for the Spartans. Their play through the neutral zone was a bit sloppy as the Spartans forced quite a few of their passes. Only having one full practice before Sunday’s game might have had something to do with that, it also could have been some first-game jitters that needed to be worked out.

With 12:04 left in the first period, Walsh was sent to the penalty box for cross-checking and the Spartans found themselves on the penalty kill. Western Ontario made short work of the power play as third-year forward Noah Schwartz scored just 20 seconds in to tie the game.

The Spartans came out looking much better in the second period. They again maintained a lot of possession and continued to fire shot after shot at Western Ontario goaltender Peter Delmas. Again, the constant early pressure from the Spartans got to Delmas, as Walsh was able to secure the rebound off of a shot from Michael Ferrantino and put it in the net. That would be it for the scoring, and the Spartans would hold on for the 2-1 win.

Despite the victory, there are still a few things the team will need to work on before they head out east this upcoming weekend for the Ice Breaker Tournament. The Spartan power play was 0-7, which could be cause for concern, but head coach Tom Anastos and players are confident that things will get worked out before the upcoming road trip.

“We didn’t have a lot of time to work on it,” Ferrantino said. “We kinda just put it together and had a little bit of basic structure, but hadn’t really had a chance to practice yet. Once we get a few reps in practice, it’ll be fine.”

One bright spot in this game was the performance of the freshmen. Milan was the only one who had something to show for it on the score sheet, but Zach Osburn and Mason Appleton had a big impact on the game. Osburn showed off his speed and elusiveness, while Appleton was constantly creating chances. Appleton nearly had a goal of his own, but it rang off the crossbar and was called a no-goal by the referees.

In particular, Anastos spoke highly of Appleton’s performance after the game.

“He was pretty much what we were expecting,” Anastos said. “I thought he was good with the puck on his stick. He makes things happen and he finds guys on the power play. He plays a full 200-foot game and I thought he did a good job.”

The 2015-2016 regular season will officially get underway when the Spartans travel to Portland, Maine to take on the University of Maine and Lake Superior State on Oct. 9 and 10.