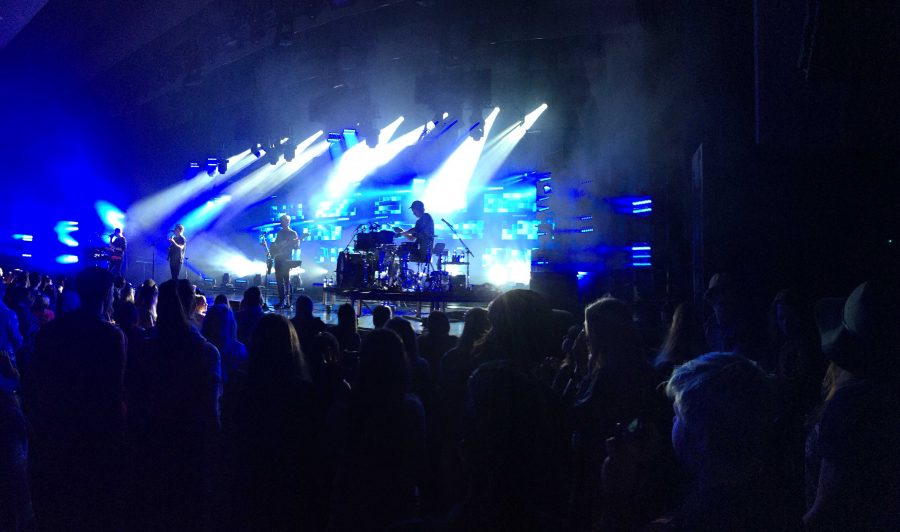 If you know of alt-J, you know that this band is one of those rare groups that cannot be easily categorized. On Tuesday, September 22 at Meadowbrook Music Festival in Rochester Hills, alt-J’s performance affirmed this notion of their inability to be defined or described easily. Their falsetto harmonies, exquisite mesh of vocals and instrumentals, and their distinguishable, inventive alterations of tempo and tune all entwine to make a one-of-a-kind concert experience.

Starting out with a rather empty orchestra pit (thanks, Stubhub) and a handful of intoxicated mothers, I was not sure what the crowd of the show would entail for me. Thankfully, the place transformed into a relaxed, ethereal environment in time for alt-J’s set.

The atmosphere of the concert was partially due to the breathtaking lighting theatrics the set had. Picture alt-J in a surreal, intoxicating background with correlating colors and visuals that went hand in hand perfectly with slower songs like “Matilda.” Or, imagine “Fitzpleasure” conquering the entire crowd with powerful reds, and the lighting corresponding to the drops in tempo. The effects lighting was a perfect asset to alt-J’s discernible sound.

It’s always a nail biter wondering what setlist a band is going to have before a concert. Will they play just their biggest hits? Their earlier albums? Lord, please, don’t let them neglect the first album.

Thankfully, alt-J made the everyday fan’s worry and fear wash away as they cleverly composed a set list that answered alt-J lovers’ prayers. The band performed a variation of songs from This is All Yours, An Awesome Wave, and some other songs from their EP, starting with one of their biggest hits, “Every Other Freckle.”

No, Joe Newman (lead-vocalist/guitar) and Gus Unger-Hamilton (keyboards/vocals) did not step out from behind their microphone or instrument. No, Joe did not get on his knees and perform a stereotypical rock ’n roll guitar solo, nor did any of the members groove to the music. However, it would probably be unfitting and bizarre if they did do any of that. Actually, hell yes, it would be extremely weird if alt-J danced around the stage and sloshed their words from being so drunk, or in other words, were typical alternative rock artists. This band is a very unique exception in the alternative music world.

To many, upon picturing an amazing, out-of-this-world concert experience, a sum of people may imagine a concert where they are dancing like a maniac and having paint thrown at them (or maybe I don’t really know, but it seems that is the consensus among millennials today). In all honesty, when I picture my favorite concerts, I can recall going bat sh*t crazy dancing and singing at an irregularly loud tone. However, when it comes to alt-J, I had an equally amazing experience just swaying to their therapeutic, foreign sound and feeling my body connect to the music. Sometimes, all it takes is the right tempo or instrumentals to pull you in, instead of a “banger” or a hyper enthusiastic performer, and alt-J does just that.