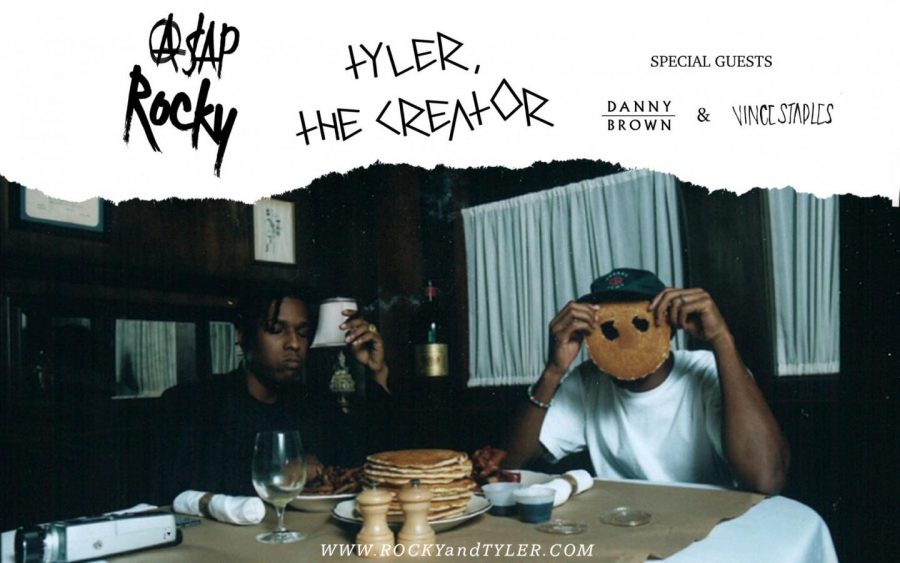 [su_pullquote align=”right”]“…at the end of the day I was left with ringing ears, a throbbing forehead, and even more love and respect for every rapper I saw.”[/su_pullquote]The A$AP and Tyler tour is a lot of things: a glorified fashion show, an ironic showcase of hip-hop’s self-awareness, an eccentric combination of some of hip-hop’s top talent, and an undeniably good time. If there’s anything certain about the tour, it’s the obscenely stacked lineup; all four performers have diverse catalogues and followings.

Vince Staples has been quietly putting out project after project of witty, brooding, and thoroughly entertaining rap. Detroit’s own Danny Brown has been giggling his way through drug-induced bangers and twisted portraits of his upbringing for three projects now. Tyler, The Creator leaps between genuine musical genius and puzzling contrarian. Even A$AP Rocky, the most industry-friendly presence on the bill, eschewed his former southern hip-hop tinged, bass heavy work for a conscious and psychedelic approach on his most recent album At Long Last A$AP.

This left one puzzled concert reviewer entering into DTE Energy Music Theater with a lot of questions: Am I underdressed? Will I make it out of here alive? What really happened to Biggie and Pac? Is Cherry Bomb genius or noise? Some were answered, others weren’t, and at the end of the day I was left with ringing ears, a throbbing forehead, and even more love and respect for every rapper I saw.

[su_pullquote]”His most recent album, Old, followed the trend of being almost evenly split between turnt-up bangers and conscious self-meditations, yet his live show eschews the latter almost entirely, albeit understandably.”[/su_pullquote]Within an hour of the 6:30 p.m. start, Vince Staples launched into his set (a hip-hop show actually beginning within an hour of doors opening is about as rare as a unicorn, so I was pretty grateful). Let’s be real, Vince Staples’ Summertime ’06 is Album of the Year so far, get over it. I had seen Vince Staples twice prior, but never with this album in his repertoire. He brought the high-octane energy of his material right out to the half-filled theater, ripping through “Lift Me Up” before delving into some great cuts from his Go to Hell EP: “65 Hunnid” and “Go to Hell.”

Vince (we’re close, so I can call him Vince) is a very entertaining dude and performer, so it’s a shame some of his songs and best quips about his audience (including mocking the “DEEEE-TROIT basketbaallllll” soundbite his DJ insisted on using frequently) were lost in a mix of poor audio and a crowd that wasn’t matching his energy. Vince was a trooper though, keenly aware of how accurate his line “All these white folks chanting when I asked ’em where my n***** at?” is, and leading chants of “F*** tha Police” on multiple occasions.

[su_pullquote align=”right”]”Everyone has a troubled relationship with Tyler, The Creator. Hell, it seems like Tyler has a troubled relationship with Tyler, The Creator.”[/su_pullquote]Shortly thereafter, Danny Brown came out to “Smokin’ and Drinkin'” followed by the ranting and raving of a mostly-full crowd that surely never partakes in such villainous behavior. Luckily, the audio issues that plagued Vince’s set were fixed by this point, a huge relief for those familiar with Danny Brown’s work. Danny’s always been a great performer, but I’ve felt that his live shows fall victim to not being a good portrait of his talent, focusing too heavily on one aspect of his diverse catalog. His most recent album, Old, followed the trend of being almost evenly split between turnt-up bangers and conscious self-meditations, yet his live show eschews the latter almost entirely, albeit understandably. However this set was an exception, possibly due to the proximity to his hometown of Detroit, as he played “25 bucks” and “Grown Up” back to back before going back in for “Dip.” Surprising absolutely no one, Danny knows how to throw a party. Every song he played was an exercise in hedonistic bliss and DTE was a full-blown riot by the time he left. One hell of a show.

Everyone has a troubled relationship with Tyler, The Creator. Hell, it seems like Tyler has a troubled relationship with Tyler, The Creator. With that being said, I genuinely think he’s a supreme talent in hip-hop when he wants to be. His most recent album, Cherry Bomb, was another example of Tyler’s self-destructive tendencies: it was both keenly orchestrated and blatantly lazy at times. Tyler is such a personality at this point that everyone knew he was gonna be entertaining for one reason or another. After the stage was set up with life-sized children’s toys on theme with Tyler’s eccentricities, Tyler nonchalantly walked on stage to tell the audience about technical issues and that he’d return shortly to perform. So, the show was off to a great start. Starting with “Deathcamp,” Tyler spent the next hour or so goofing off with Taco and Jasper, sometimes rapping “IFHY” while sitting, sometimes flailing his obscene wingspan in all directions during “48.” The audio issues resurfaced and made the lawn a quiet sit-in at times, but it’s a testament to his charisma and ability as a performer that I was very impressed with despite the large oversight on the venue’s part.

[su_pullquote]”I’ll put it this way: A$AP Rocky performed with Twenty-One Pilots while wearing a flannel at the VMA’s, yet I still kind of just wanted to hear ‘Peso.'”[/su_pullquote]The hour gap between Tyler and A$AP Rocky served as a time for silent reflection for some and frustration for others, but the second A$AP appeared on stage all was forgiven. Rocky was joined on his three-tiered stage setup by A$AP Twelvy and A$AP Nast. By this point DTE was packed, the energy had been building all night and this was the culmination of the work the three openers put in. Honestly, who knew what was going to happen?

I’ll put it this way: A$AP Rocky performed with Twenty-One Pilots while wearing a flannel at the VMA’s, yet I still kind of just wanted to hear “Peso.” I didn’t get my wish but his set was fantastic. Even songs that I was never particularly fond of like “L$D” and “Excuse Me” were as undeniably entertaining as “Goldie” and “Wild for the Night.” Being the great guy that A$AP is, he brought out Vince Staples to perform “Señorita” in a beautiful moment of sharing the spotlight, and Rocky was even joined by Danny Brown for “1 Train” before snatching the crowd back. In an unexpected development, Rocky took a moment to talk about his American pride before launching into “Holy Ghost” and finishing off with “Canal St” With A$AP Twelvy performing to the fleeing attendees, we all went home as worse people but a little better off nonetheless.