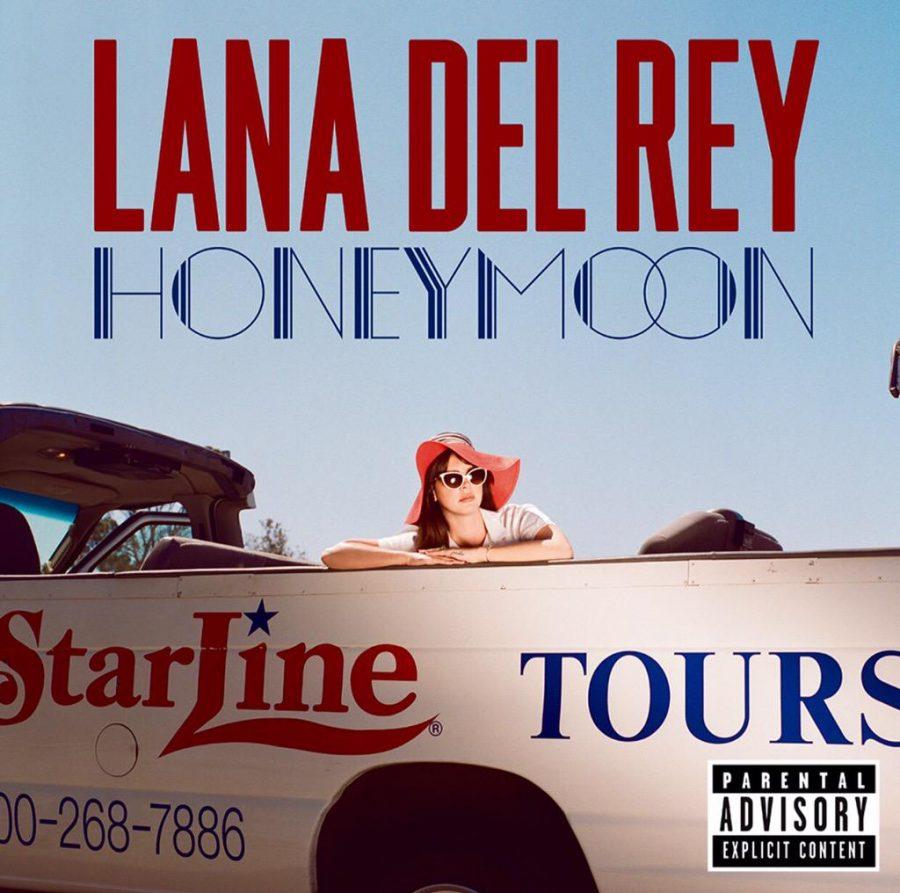 Lana Del Rey just released a new album, Honeymoon, just a little over a year after her last album Ultraviolence.

[su_pullquote align=”right”]”I would be lying if I did not say that there were two or three snoozers in the mix…”[/su_pullquote]In proper Lana fashion, the album cover is purely American: a red, white, and blue color scheme featuring our femme fatale in a convertible wearing a floppy hat and sunglasses. She is more Lana than we ever thought she could be. Rumor has it, you can call the 1-800 number on the side of the car and she just might answer. If not, she’ll “bitch button” you and leave you to listen to a TED talk about the confines of the universe.

The opening (and title) track of the album “Honeymoon” sets the tone for the rest of the album. It’s a medley of dark melancholic sounds that do not waver, sulking on for 14 tracks in the most glamorous way imaginable to emulate that full sad girl aesthetic. I would be lying if I did not say that there were two or three snoozers in the mix: “24” and “Art Deco” are two sleepy b-sides. Highlights from the album include “Music To Watch Boys To,” a California summertime daydream filled with riffs and pink flamingos. “Salvatore” (my personal favorite from the album) has her singing sweet nothings about soft ice cream and Italian things, and “The Blackest Day” brings the album full circle to pull on those “heavy heartstrings” and confront her blues when she sings “got my blue nail polish on / It’s my favorite color and my favorite tone of song.”

With this being her third album, I think it is time that we push aside our existing feelings about her and realize that this is perhaps the sound she was seeking all along; a purely Lizzy Grant, old Hollywood, pop noir space that celebrates love and love lost with little bits of sax and satisfying vintage vocals to question its place in the realm of pop music and seek a genre that can really be pinpointed. It’s just Lana.

Honeymoon was released on 9/18/2015 by Interscope Records.