Spartans Draw Even with No. 8 Maryland in Big Ten Opener 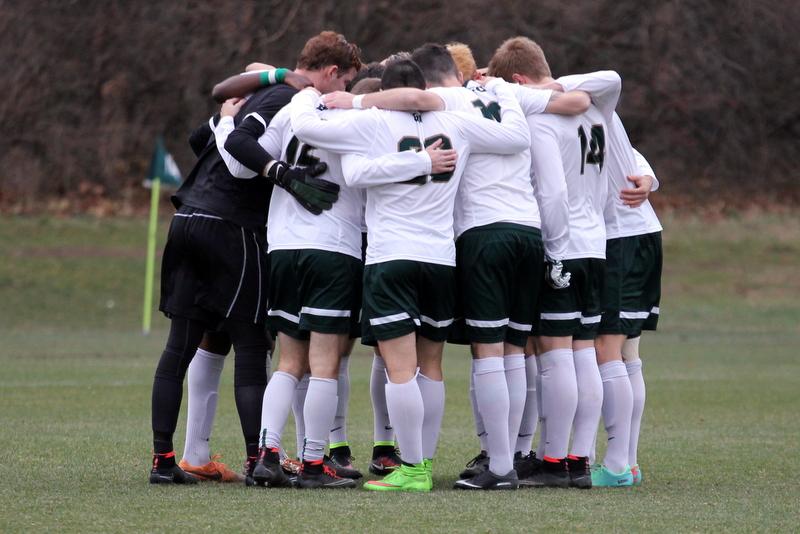 With a storm system traveling toward Michigan, another storm was already building in East Lansing, as anticipation grew for Michigan State men’s soccer’s matchup with No. 4 Maryland.

DeMartin Stadium was witness to a double overtime, defensive battle ending in a 0-0 tie. Although the score line may not reflect it, the first Big Ten match for the Spartans lived up to all the hype.

After a 1-0 loss to No. 1 Creighton last Friday, Michigan State looked to rebound against No. 8 Maryland. The team was not able to secure a win, but a tie with a top-ranked team wass something they could live with.

“You always want to win at home, but Maryland is a very good team and not everybody is going to tie Maryland,” MSU head coach Damon Rensing said. “A tie isn’t the worst result for our first Big Ten game.”

Not only was the final score a tie, but the shot total was also dead-even at 16 shots per team. Neither team looked mismatched at any point, as momentum swayed back and forth throughout the match while each defense remained solid.

“I think we played really well,” Carroll said. “I think for most of the game we really outplayed them, we moved the ball around well, had good possession, and got into good spots…it’s just another game where we couldn’t get the ball in the goal.”

Perhaps the best scoring chance from either team came roughly 97 minutes into the match during the first overtime, when Maryland defenseman, Chris Odoi-Atsem, sent a cross into the box.  The ball was redirected toward the net by Maryland’s Tsubasa Endoh, barely getting past MSU goalkeeper Zach Bennett, and eventually emphatically cleared just short of the goal line by MSU’s Carroll.

“In the back of my mind I’m thinking ‘please don’t whiff this,’” Carroll said.

The Terrapins may have had the best chance, but Michigan State found themselves with the ball in or around the box countless times. Missed headers, off-target shots, and great saves kept the ball out of the net.

With less than two minutes left in the second overtime, both teams scrambled to create a chance. MSU put pressure on the tired Maryland defense with a long cross sent into the box, just missing a diving attempt by sophomore defender, Jimmy Fiscus.

“I think we’re still finding ourselves in great positions,” Bennett said. “As frustrating as it may be, I’m not super worried about it because I’ve seen these guys score…they score on me every day in practice. It’s going to be one (goal) and then I think the floodgates will open…it’s just getting that monkey off our back.”

The Spartans are now 3-2-1 (0-0-1 Big Ten) and will have a chance to get rid of that monkey at their next game on Tuesday against No. 2 Notre Dame in East Lansing. The Fighting Irish are 4-2-1, with a loss in their last game against Xavier in South Bend, Indiana.