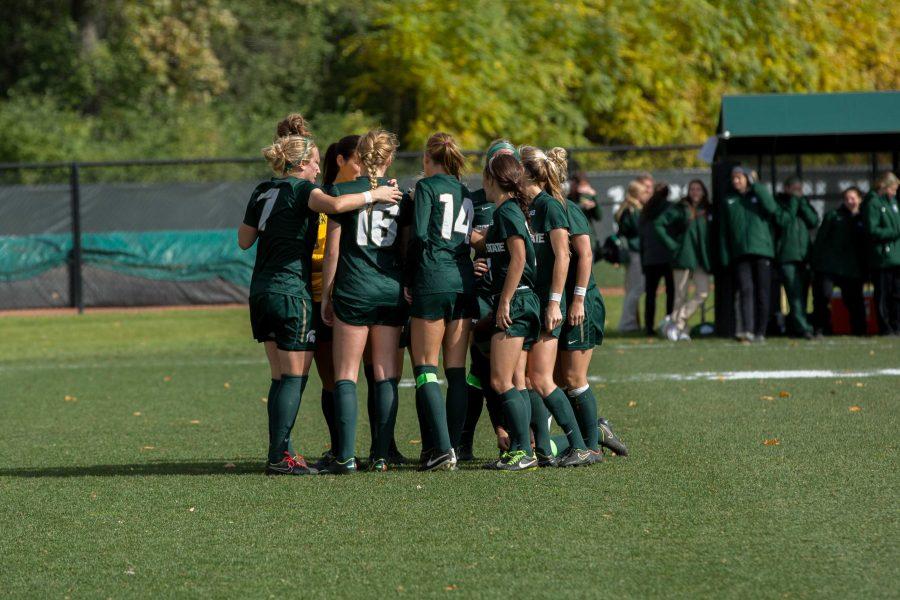 EAST LANSING, Mich. – You may not have guessed by simply looking at the score, but Michigan State dominated Iowa on their way to a 2-1 win in their Big Ten opener Friday at DeMartin Stadium.

The Spartans took control of possession from the first whistle and had Iowa back on their heels defending most of the game.

Freshman Alexis Warner was the story this time around. Voted Big Ten freshman of the week on September 1, Warner added two more goals to her season total. The first came in the second minute of the game when sophomore forward Jamie Cheslik sent a pass from the right side into the box where it found the foot of Warner who put it in.

“It was a great collective effort to win the ball,” Warner said. “I just saw Jamie making a hard run and I just knew that we all had to get up and get in there and I just got my toe on it. It was a great ball by Jamie.”

The Spartan defense was relentless against the Hawkeye attack. Nearly every time Iowa was able to get possession of the ball, a Michigan State player was there to take it away and progress up field. Iowa was able to get a few shots on the net, but there was nothing that MSU goalie Gabrielle Gauruder could not handle.

Warner’s second goal of the match came in the 32nd minute when a rebound on a shot from Kirsten Evans again found the foot of Warner, who tucked it in the back of the net. Warner had a lot of praise for the teammates who helped her net both of her goals.

“In practice we talk about rushing the net and making sure we’re making hard runs in the box,” Warner said. “That was a great hit by Kirsten on frame and I was lucky to pick up the goal.”

Iowa was able to break through once toward the end of the first half when Alina Magruder snuck one past Gauruder to put the Hawkeyes on the scoreboard.

The second half saw a lot of the same things that the first half did. The Spartans maintained a lot of the possession, the shots grew more for the Spartans than for the Hawkeyes, but the score remained the same.

Warner nearly had a third goal just three minutes into the second half, but it was sent wide left. The Spartans had a few chances in the second half but were unable to extend their lead. Perhaps the best chance came when Cheslik found herself in the open field with a breakaway, but was unable to get a shot off.

For the first time since 2009, the Spartans were able to secure a victory against Iowa. In an impressive victory, the Spartans are now 5-1-2 on the season and 1-0-0 in Big Ten play.

“I think we started off really strong,” forward Kristelle Yewah said. “Getting that early goal was really good for our team. We were doing really well with pressuring and playing into the forwards’ feet, which helped us attack more.”

Michigan State will look to keep the pressure up on Sunday when it takes on Nebraska.