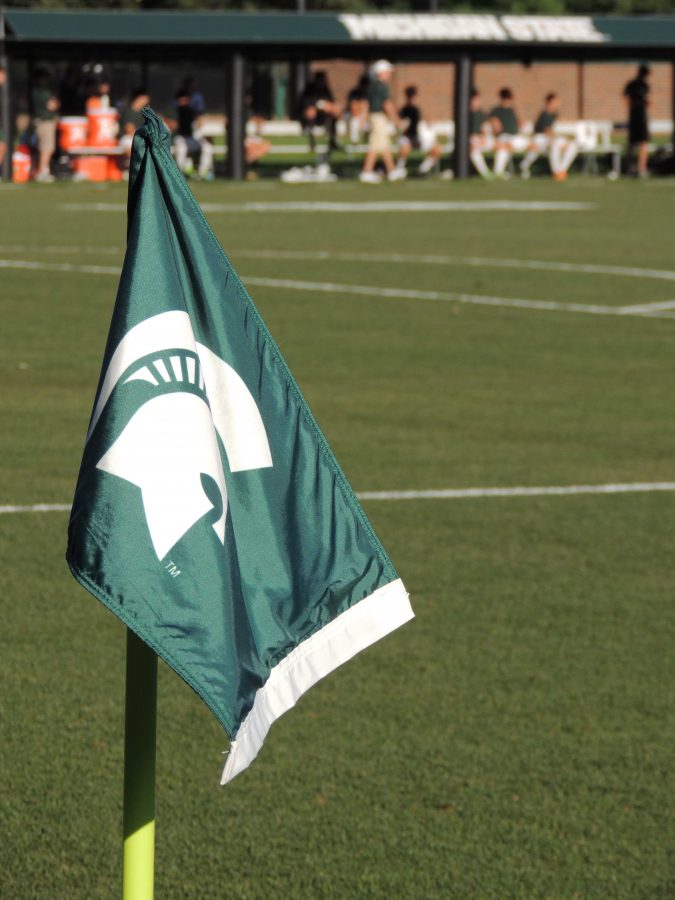 EAST LANSING, Mich. – Sunday, Michigan State welcomed the top team in the nation, Creighton, to DeMartin Stadium and greeted them with a stout defensive performance.

However, just a momentary slip of attention was all it took to nullify an otherwise great performance defensively, losing 1-0.

“I honestly thought the defense played very well,” Michigan State goalie, Zach Bennett, said. “In the second half, I don’t think they really had any chances. First half, (Creighton) maybe had one or two.”

Creighton applied a high press throughout the game, making it difficult for MSU to retain possession or craft any dangerous spells of attacking. Creighton meanwhile was able to control possession, but not serious threaten Bennett’s goal.

The first glaring opportunity did not come until 42 minutes in, when Creighton unleashed a long ball downfield. The ball was well placed and forward Fabian Herbers pursued it, while Bennett came off of his line to attempt a punch.

Herbers was the first to the ball, but Bennett was a close second, contesting the header enough so that the shot bounced wide of the goal.

Just 40 seconds before halftime, however, Bennett received a back-pass with Herbers distantly pursuing. Bennett had an inexplicably and uncharacteristically lackadaisical touch, and Herbers pounced.

Herbers reached the wayward ball first, ramping up his speed to get there, as Bennett tried to compensate with a dive, but it was too late. Herbers was in on goal and slotted it into the empty net for a one-goal lead.

“Going back, I probably would have just one-timed (the ball) out. That’s what I should have done,” Bennett said regarding the goal.

“The goal’s on me. It’s on no one else. So it’s unfortunate that we’re not walking away with a draw or maybe something more.”

With still 45 minutes to play, both teams had time to make sure that goal was not the decider.

Thirteen minutes into the second half, Creighton scored again, after a pinballing ball fell to the feet of forward Ricky Lopez-Espin. He powerfully launched a shot into the back net.

With the line judge’s raising of the flag, however, Lopez-Espin was ruled offside and the score returned to 1-0.

One last great chance remained, when an MSU cross penetrated deep into the six-yard box. Ryan Sierakowski was awaiting the ball at the back post, but it skipped past before he could make contact.

“The defender was in front of me and I didn’t see it until the last second. But it’s all about focus,” Sierakowski said. “I just took my eye off for a split second and mistimed (my kick).”

The Spartans pressed and were able to dictate the flow of the game in the second half, but their only true chance to score came on that cross. The game ended 1-0, leaving the Michigan State side unsatisfied with the result.

“Some very good spells, but I think for us it was a little naïve,” MSU head coach Damon Rensing said. “At the end of the day, you can’t give them goals and when you have chances, you have to take them.”

Creighton will likely keep their top spot, while MSU will walk away feeling conned out of a point. But the Spartans recognize that there were many positives to take away as well. A 1-0 loss to the top-ranked team in the country while starting five freshmen and sophomores is something to be proud of, according to Rensing.

“If you want to look at the body of work today, there’s definitely some things to feel good about what we did,” Rensing said.