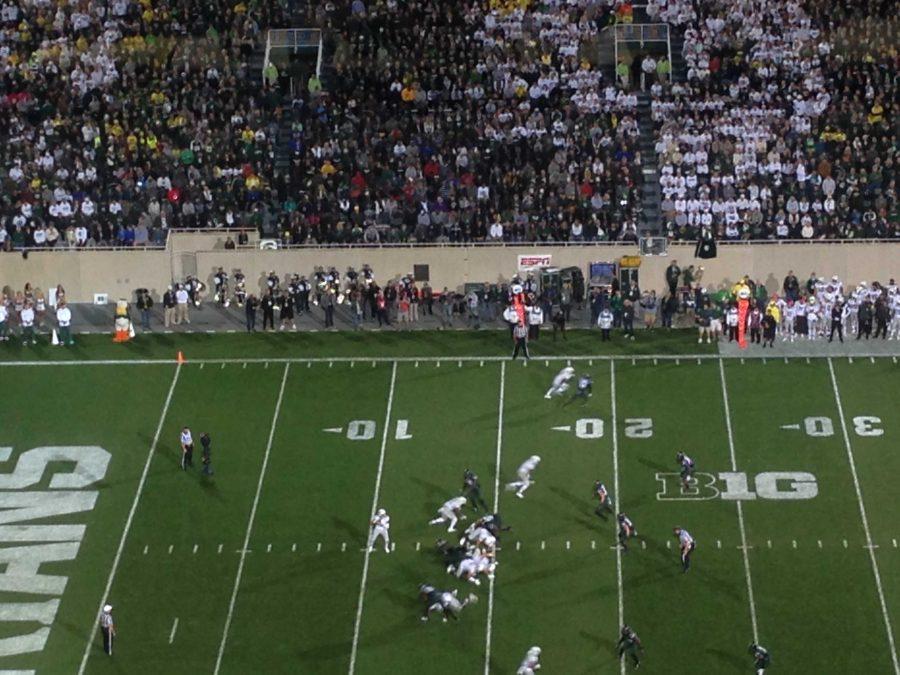 It did not take long for fireworks to spark in Spartan Stadium Saturday night, as the No. 5 Michigan State Spartans outlasted the No. 7 Oregon Ducks 31-28.

Oregon and Michigan State traded touchdowns in the first four minutes and 58 seconds of the game. The back-and-forth contest did not end there.

The scoring started when Oregon marched right down the field in 13 plays covering 75 yards in a span of three minutes and 50 seconds. The drive was finished by sophomore running back, Royce Freeman, who punched the ball in from two yards away.

However, the Spartans answered swiftly with a quick drive of their own. On the first play from scrimmage, redshirt freshman Madre London burst for a 62-yard gain, which was followed by senior quarterback Connor Cook tossing a 12-yard touchdown pass to junior tight end Josiah Price. It was a three play drive that lasted one minute and eight seconds.

Oregon never backed down despite being in hostile territory. The phrase “speed kills” was on everyone’s mind when redshirt junior Bralon Addison returned a 81-yard punt to the house to tie up the game at 14-14.

Considered a pivotal moment in the game, Cook showed off his poise finding senior wide receiver Aaron Burbridge for a 28-yard completion on a fourth-and-six. On the very next play, freshman running back LJ Scott scored on a six-yard run to give the Spartans a 21-14 lead.

“I have a lot of faith in Connor Cook, and our passing game,” Spartans head coach Mark Dantonio said. “We knew we were going to have to take chances in this game – and we were prepared to take those risks.”

“Coach D. likes to roll the dice,”Cook said. “And it’s great he has confidence in us to make those plays because we have a lot of confidence in ourselves

No matter whose number he calls, we know we are going to come up big.”

Pulling within three, Oregon still had no answer on defense as Scott rushed for his second touchdown of the night to push the lead to 31-21.

Scott pounded the ball on the ground for 76 yards, and crossed the endline twice for the Spartans, but the train did not stop there.

London added to the power attack, rushing for 103 yards of his own.

Not to be overshadowed, but the Spartans protected the ball extremely well throughout the night, keeping possession for 33 minutes not allowing the fast-paced Ducks offense to start rolling.

Yet Oregon hung around, cutting the deficit to 31-28 after seniors Vernon Adams Jr. and Byron Marshall hooked up for a 15-yard touchdown pass late in the fourth quarter.

“I watch those ‘Fast and Furious’ movies every once in awhile and this game reminded me a lot of that,”Dantonio said. “Two teams battling it out.”

With 76,526 watching in the stands, the crowd swallowed Oregon’s high potent offense at the end of the game, giving the Spartans a big victory against the team that stole one just a year ago.

“It was a tremendous environment,”Dantonio said. “This was the place to be, no question about it. Spartan Stadium is a special place, with special people, and this was a special time.”

MSU will now prepare for their next game, as they host Air Force (2-0) next Saturday at noon.