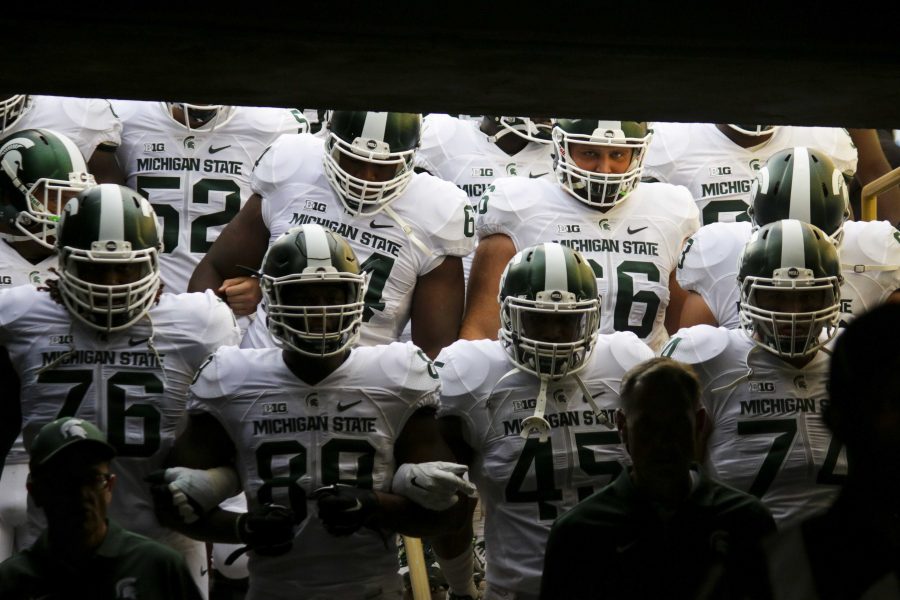 Since 2013, both the Michigan State Spartans and Oregon Ducks have notched the third most wins in the NCAA FBS (25). Come Saturday one of these teams will march ahead, with 26 wins.

The No. 7 Oregon Ducks come into East Lansing to square off with the No. 5 Michigan State Spartans, in what will be the first top 10 matchup of the 2015 campaign.

Last season, the Spartans came out swinging at Autzen Stadium, yet the leadership, and dynamic play of Heisman Trophy winner, Marcus Mariota, proved to be the difference as the Ducks recorded a thrilling comeback, winning 46-27.

Trailing 27-18 in the third quarter, the Ducks, led by Mariota, scored four unanswered touchdowns to seal the victory.

The rally started on a third and 11 for the top-rated offense. As the play unfolded, Mariota escaped the Spartans’ rush and proceeded to pitch the ball to freshman Royce Freeman, who successfully moved the chains. It was considered the pivotal moment, which kicked off the comeback.

This season, the hype is back, and the anticipation is boiling from last year.

“This game has been circled on my calendar for a long time now,” MSU senior safety RJ Williamson said. “They beat us last year, and we have a chance to go out, redeem ourselves, and I will be one hundred percent focused,”

“We let them get away with one last year.”

Oregon put up 61 points against Eastern Washington in week one. Leading the charge was Freeman, who galloped for 180 yards and rushed for three touchdowns.

True freshman, Tony Brooks-James also contributed to the onslaught, adding two touchdowns of his own.

The remaining question is – how will Oregon’s high-tempo offense fare against Michigan State’s tough run defense?

“Oregon has a lot of athletes on the perimeter who can make plays, so we have to concentrate on the fundamentals, the basics, the details and make tackles in open space,” MSU senior linebacker Darien Harris said.

Harris’ training in the weight room was different this year than last year in preparation for this game, and for the up-tempo Ducks offense.

“You have to be in shape for this game. You can’t bulk up in the weight room,” Harris said. “We, as a group, we have to be able to move, and have loose hips,”

“Oregon does a tremendous job of getting the ball in their playmakers’ hands,” Dantonio said. “They also give so many different looks throughout a game.”

Michigan State has one of the toughest run defenses in the country. In fact, the Spartans are tied for second in the country with TCU in allowing the least amount of rushing touchdowns since 2011 (42).

“The key for us as a defense is to use leverage, using your teammates,” Williamson said. “We can’t worry thinking we are by ourselves. There are 10 other guys, plus the sideline to use to our advantage. We have to play fast, and physical, and not worry about making a mistake because there are 10 other guys running to the ball.”

Of course, not to be forgotten, ESPN College Football Gameday will be on campus in East Lansing, creating a different buzz for the fans, players and coaches.

“I tell some of the younger guys: excitement will be rolling through campus, and you’re going to be nervous, but it’s just like high school – just more people watching,” Williamson said.

“It’s everything you think about when you want to come and play at Michigan State University,” Dantonio said. “It’s very exciting for all Spartan fans, and Spartan Nation.”

Spartan All-American running back (1964-1966) Clinton Jones will be honored Saturday night for his election into the College Football Hall of Fame. His name will be unveiled on the Spartan Stadium Ring of Fame before kickoff.

Along with Jones, former Spartan running back Le’Veon Bell will serve as an honorary captain for the game.

As if there wasn’t already enough excitement in East Lansing.