MSU Dominated by No. 6 Notre Dame 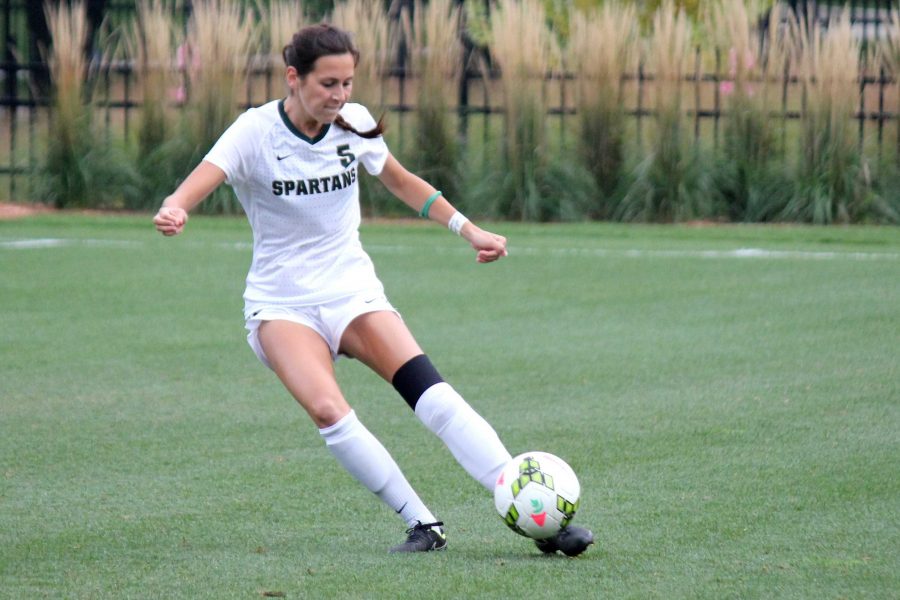 EAST LANSING, Mich. – Maybe it was the start of classes, or maybe it was the heat. Either way, the Michigan State women’s soccer team never looked competitive against Notre Dame, who dominated possession and the attacking impetus en route to a 2-0 away win.

Unable to execute their game plan from the opening whistle, Michigan State failed to lodge a single shot on target. Instead, they were forced onto the back foot early and despite solid defense, could not prevent the Fighting Irish from scoring two goals in a game of unrelenting pressure on the Spartan goal.

“Disappointing. We could not get anything going in the midfield and open things up and have a chance to use some of our weapons,” Michigan State head coach Tom Saxton said.

“The last thing we said both in the locker room and pregame was, ‘We have to make them defend us, so let’s attack and get on the front foot’,” Saxton said. “But we turned the ball over too much when we had chances.”

The game started off at a frenetic pace, but while Notre Dame threatened the goal, the Spartan attacks broke down before serious progress was ever made. Eventually, the Irish settled into a comfortable pattern of possession that included a plethora of chances.

And in the 32nd minute, one of those chances finally paid off.

Anna Maria Gilbertson, a senior winger and the star of the game, dummied a defender to come in from the right wing, and after a few stepovers, delivered an outside-footer to the bottom left corner. The ball caught the back of the nearest MSU defender, redshirt senior Mary Kathryn Fiebernitz, but the deflection did not change the trajectory of the perfectly-placed shot.

“Credit to Notre Dame, it was just great by them to shoot,” Michigan State goaltender, Gabrielle Gauruder said. “It’ll pin a defense and a goalie every time. (Gilbertson) just shot the ball and it went off my back defender and into the side netting; there’s just not much you can do.”

Gilbertson was the most dangerous player on the field throughout the game, logging seven shots, including one that hit the crossbar and another two that forced nice saves out of Gauruder. Especially in the first half, Gilbertson was an unanswered question that Michigan State had to attempt to answer.

In the second half, Notre Dame grabbed a quick goal despite lessening the pressure. The goal came after Notre Dame’s Sandra Yu had a tackle high up the pitch to ignite a counter attack. She waited for her support to get into position before sliding a ball to the feet of forward Natalie Jacobs, who had dragged out to Yu’s right.

Composedly, Jacobs put the ball into the opposite corner, sealing the win for the Fighting Irish.

“We feel like when we’re organized, our team defense can play against a top-level team like Notre Dame. Then, you have to eliminate individual breakdowns, which probably led to both goals,” Saxton said.

“But, it goes back to possession. If we can’t keep the ball for periods of time and you’re going to defend the whole time, then the chances of a breakdown grow.”

Saxton and his squad were obviously unimpressed by their performance, but were all too aware that this was going to be a hard game one way or another against a sixth-ranked Notre Dame team.

All thoughts after the game drifted toward fixing the possession problems in preparation for the next game against San Francisco, a home match on Friday.