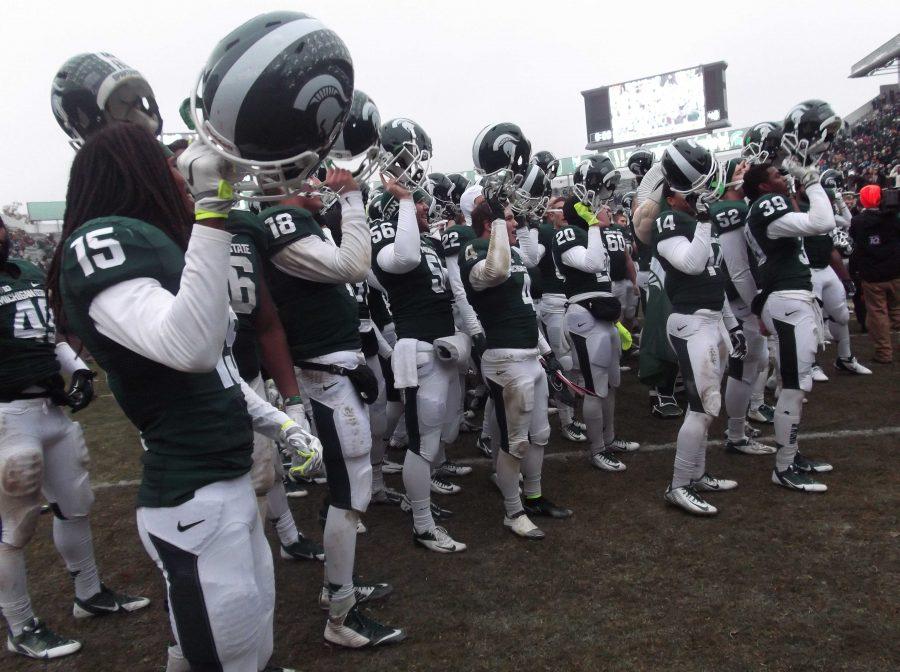 Michigan State football is back and bigger than ever. Historically, the Spartans have always had an excellent reputation of being a basketball school. But the tides may be turning with the football program on the rise.

It all began in 2007, with the hiring of head coach Mark Dantonio from the University of Cincinnati. He put MSU football back on the map, as they prided themselves on smashmouth football and stingy defenses. In eight years at the helm, Dantonio has guided the Spartans to two Big Ten Championships and four straight bowl victories, none more glorious than the 24-20 triumph of Stanford in the 100th Rose Bowl.

These significant accomplishments would not have occurred, however, without former Spartan quarterback Kirk Cousins and current quarterback Connor Cook.

The revival of Spartan football all started with Cousins. His outstanding contributions earned MSU their first Big Ten title since 1987 and a bowl win under his legendary career.

Then came Cook onto the big stage. He was expected to fill big shoes after a mediocre 2012 season, and he did just that and then some. He led the Spartans to a Big Ten Championship and a Rose Bowl win the following year, as well as gone a perfect 3-0 in bowl games.

Cousins has won more games (27) in a Spartan uniform than any other MSU quarterback, but Cook is looking to surpass his win total as he enters his final year with a career record of 23-3.

The million-dollar question, however, is who is or will be remembered as the better quarterback?

The comparison is broken up into three main categories that should ultimately give a good idea of how they both stack up. Whether you think Cousins or Cook deserves the highest accolades, Spartan fans can all agree that they will go down in Michigan State history as two of the greatest players to wear Green and White.

The No. 1 thing Spartan fans want to see their team do is take down Michigan and Ohio State. And that is exactly what Cousins and Cook did.

It was Cousins who kicked things off first by beating Notre Dame and Wisconsin at Spartan Stadium, in addition to Michigan and Penn State on the road. The next year he led MSU to marquee wins over Ohio State, Michigan and Wisconsin, en route to a division title in the newly arranged Big Ten Conference. Cousins holds an undefeated record against Sparty’s in-state rivals Michigan, as well as the Buckeyes. In addition, he went 1-2 vs. Notre Dame and 2-2 against the Badgers.

Just like Cousins, Cook claims an undefeated record against the Wolverines with a 2-0 mark. He can make it 3-0 if he can notch a fourth win in the Big House this season.

Cook’s .500 when pitted with the Buckeyes, as the Spartans took down OSU in the 2013 Big Ten Championship game, 34-24. But head coach Urban Meyer and quarterback J.T. Barrett got the last laugh by avenging the loss in a decisive 49-37 win in East Lansing last year.

Cook’s first career loss came at the hands of the Irish in South Bend two years ago, as they were outmatched 17-13.

Both quarterbacks really shine in this area, but Cousins has the upper hand. Unlike Cook, he was able to beat Notre Dame and officially declare an undefeated mark against Michigan at the end of his career. Two of the three Michigan teams Cousins took down were unbeaten heading into the showdown. It’s a close call, but Cousins comes out on top on this one.

The top three factors that most coaches look for in a quarterback are: leadership, good decision making, and physical and mental toughness.

Cousins and Cook have led by example time and time again, as they have proved that they have the tools it takes to be a successful QB. They both have a great reputation of being extremely accurate, making solid decisions and sustaining efficient drives.

This would be indicated by their touchdown-interception ratio, with Cousins having a 66 TDs: 30 INTs ratio, while Cook currently claims a 47 TDs: 15 INTs ratio.

In his senior year, Cousins finished No. 1 in the conference in pass completions (267) and passing yards (3,316). He finished his tenure as a Spartan with a superb 146.1 overall passer rating.

On the other hand, Cook was No. 1 in the conference in passing yards (3214) last season. He claims an impressive 141.5 overall passer rating, which is not too far from Cousins’.

Both Spartans are also unexpected threats on the ground.

The biggest difference is the arm strength. Cook is more accurate than Cousins with the medium/deep throws, but Cousins, arguably, was physically stronger. Cook is on course to surpass Cousins’ throwing stats, as he’s only 20 touchdowns and 3,068 yards short of topping Cousins’ school records.

This is a tough call, but you have to go with Cook. He’s en route of breaking Cousins’ records and he’s also a slightly better decision maker. Cook executed quite a few designed runs last year, as he’s superior in terms of speed and agility.

This is one of the most undervalued and forgotten pieces when talking about quarterbacks.

When Americans hear the word “clutch”, they think of the Michael Jordan and the Joe Montana’s of sports. Those two gifted athletes have been and still are the iconic image of their respectable sport.

For Michigan State, Cousins and Cook have had their moments.

In 2011, Cousins beat Wisconsin on a miraculous Hail Mary as time expired. A few months later, the Spartans made a comeback for the ages in the 2012 Outback Bowl. The senior quarterback charged the team down the field to score a touchdown with under two minutes left in the game to tie up the score. Three overtimes and a blocked field goal later, MSU bested Georgia 33-30. It was MSU’s first bowl victory since the 2001 Silicon Valley Classic. This was the start of four consecutive postseason victories, followed by wins in the Buffalo Wild Wings Bowl, the Rose Bowl and most recently the Cotton Bowl.

For Cook, his best moments came in his last two bowl games. He threw an awful interception in both the Rose Bowl and the Cotton Bowl. Cook shook it off like it was nothing afterward, and played his best football from there on out. Thanks to his resiliency and his tenaciousness, Cook was able to dig the Spartans out of a huge hole after the deadly turnovers. Trailing by 10 to Stanford and down by 13 to Baylor, Cook and Co. fought and clawed their way back into the game with great execution and focus. MSU ended up topping Stanford in the Rose Bowl 24-20, then shocked Baylor 42-41, coming back from a three-touchdown deficit.

Cook has a favorable edge over Cousins when it comes to being clutch. He’s more resilient than Cousins, as he’s more mentally tough. Cousins threw many interceptions in his final bowl game, especially one in the first overtime that almost cost the Spartans the game.

The two MSU quarterbacks are very similar in most areas, but it’s Cook’s consistency that’s the biggest difference maker. Cousins had a lot more trouble than Cook when it came to getting out of a funk or slump. And because of that, I would take Cook over Cousins in this quarterback duel.

Yet again, we can all agree that they are both winners. They aren’t just two of the best quarterbacks in MSU history, but also two of the most decorated and accomplished players in school history.

When the time comes, the college football world will have a solid idea of where Cook ranks among the Spartan greats as his career comes to a close.