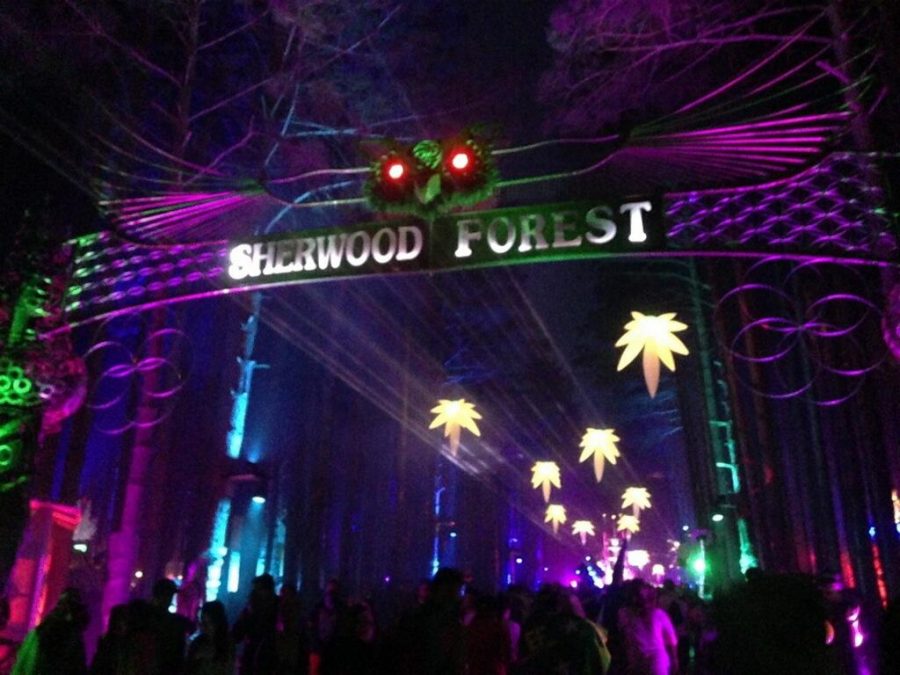 These were Grant Township Treasurer Joanne Heck’s words as she passionately voted “No” last November on the permit to allow this year’s Electric Forest Music Festival take place at the Double JJ Ranch in Rothbury, Mich. Despite Heck’s best efforts, the Grant Township Board of Trustees, which oversees the legislative affairs for Rothbury, approved Electric Forest’s permit for another year by a narrow 3-2 vote on the condition that the Festival face an annual evaluation to weigh the benefits to the community.

[su_pullquote]“I’ve never seen anything quite like this at any festival I’ve ever been to.”[/su_pullquote]It is easy to see both sides of what is regularly a contentious issue in the little community just a few miles away from the coast of Lake Michigan. Never having a scarcity of awe-inspiring things to see is just one of the many reasons why people from all over the United States and the globe evolve the Double JJ Ranch into a crowning jewel of Pure Michigan.

This year’s sold out Electric Forest was a logistics test on all fronts for Festival management who appeared to struggle with coordinating the influx of 45,000 people, 10,000 more than last year’s festival.

On the first official day of the Festival, I made the rounds to grow familiar with this new world I was in. Totems featuring everything from NBC’s Matt Lauer to South Park’s Towelie paraded through the campgrounds as people made their way into the festival for the first time.

“I’ve never seen anything quite like this at any festival I’ve ever been to,” said Kevin, who traveled from New Hampshire with his friends to be a part of the Forest comradery.

Unfortunately for Kevin, he was not speaking about the state of the art lighting which donned almost every tree inside the festival; he was describing the line that he and his friends had been waiting in for three hours just to get into the venue from the campgrounds. Entrance security seemed ill-equipped to file through the chaos of having this many people waiting. To their credit, they still handled the stress like champions.

[su_pullquote align=”right”]”There are few places on this planet where it’s commonplace to be immersed in a world of perfectly blended EDM stylings in a jam band atmosphere where the only limitations on the experience to be had are those which we impose on ourselves.”[/su_pullquote]I felt terribly for this crowd of people waiting, who all paid almost $400 (if not more) to attend. A group of photographers and I bounced from staff member to staff member trying to find the media entrance we were told existed. We finally found the entrance when we were smacked with yet another roadblock.

“ALL SPECIAL ENTRANCES ARE SUSPENDED AS OF RIGHT NOW,” a panicked supervisor barked in our faces as she surveyed the growing line of people.

After dodging the bulk of the planning errors I faced, I made it inside the Festival grounds where I found a place unlike any I had ever seen before; a place as eccentric as the people who visited it. There are few places on this planet where it’s commonplace to be immersed in a world of perfectly blended EDM stylings in a jam band atmosphere where the only limitations on the experience to be had are those which we impose on ourselves.

This year’s Festival brought new ambiance to the northern end of Sherwood Forest while staying in touch with the points of Festival’s past that made it a North American festival powerhouse. When the addition of two new minor stages, the Hangar and Jubilee, was announced, Festival officials provided only names of the new stages which left their exact design to the imagination of eager Festival-goers. During the Festival, people visiting the Hangar were treated to a blast from the past complete with a tattoo parlor, full functioning massage lounge, and barbershop all tied together with the smooth jazz sounds of the 1940s inside of the refinished airplane hangar.

[su_pullquote]”Electric Forest had no shortage of standout performances to tickle whatever fancy you’re feeling.”[/su_pullquote]For the Forest faithful, it would be hard to imagine Electric Forest without the spiritual musicianship of Colorado based jam band, the String Cheese Incident. The group has been coming to the Forest since its original inception as Rothbury Music Festival in 2008 and has since acted as the bridge which connects all the genres represented.

Offering up three days of mind-melting three-hour sets is enough to challenge any seasoned performer, but SCI routinely makes it look about as easy as drinking water. The Friday night Cheese set proved to be the most memorable by my account as they strummed through a journey of bluegrass, rock covers, and psychedelic country roots culminating in a special appearance by Skrillex during an encore cover of the Door’s “Break on Through (To the Other Side)”.

For me, the most memorable set of the Festival came on Friday night when Australian DJ Flume took to the Sherwood Court stage for a night of pulsing electronic music fused with the soul of the Motor City and wrapped in a bow of funky dubstep. Flume’s 2015 tour came to a rousing close in front of a crowd of about 30,000 people looking to party the early morning hours away. Flume tore through his set with a vengeance normally seen in a Die Hard movie, culminating in an outstanding encore featuring his critically acclaimed cover of Disclosure’s “You & Me.” It would be safe to say that there could be no better ending to a long tour than what Flume did at Electric Forest.

Electric Forest had no shortage of standout performances to tickle whatever fancy you’re feeling. New York based instrumental group TAUK delivered what I would call the most musically intricate set of the weekend. The quartet transcended the conventional boundaries of musical genres fusing together funk, jazz, and electronic synth melodies. TAUK drummer Isaac Teel weaved through series after series of off-beat 16th notes to blend the band’s iconic sound in an otherworldly fashion, keeping you on your toes like a horror movie cliffhanger. This band was definitely worth seeing both times I made the trip to the Jubilee stage.

For the parishioners of the First Church of EDM, Electric Forest rounded all the bases during this year’s installment. Drawing in big artists like Bassnectar, Skrillex, ODESZA, Gramatik, Big Gigantic, among others, provided the clearest signal that Electric Forest is looking to make the shift from being a magical forest of jam bands to a mecca of global electronic music.

The biggest take away from this weekend would be that, pending the grace of Grant Township officials, the seeds of this festival have been planted and will grow to be on par with any other festival on the face of the planet. The crossroads of music meet in Rothbury once a year for this annual meeting of the exuberant, flashy, eccentric, and just plain weird (ask anyone in attendance and they would probably be proud of that last one).[su_pullquote align=”right”]”Electric Forest recharged, reenergized, and refocused on the meteoric rise of electronic music in the mainstream while continuing to preserve the unique culture that has made the Sherwood Forest one of America’s greatest kept secrets.”[/su_pullquote]

It is clear to see what makes Electric Forest a counterculture hotspot for Millennials of all different backgrounds. Despite running into the growing pains that I did, it is clear that the weekend went off without any major incident of concern.

The Michigan State Police Department should be commended for their outstanding coordination of safety and law enforcement aspects. In all of the festivals I’ve been to, I have yet to see a law enforcement team be so vested in the fun of the weekend that you almost forget that they are there to do a job.

This year’s Electric Forest recharged, reenergized, and refocused on the meteoric rise of electronic music in the mainstream while continuing to preserve the unique culture that has made the Sherwood Forest one of America’s greatest kept secrets. I think I can be so bold as to say that the secret is out and the rise is only intensifying.

Should this festival return next year, I can safely say that it will keep getting bigger and better.

The ball is now in your court, Grant Township Board of Trustees.