Pokey LaFarge at The Ark 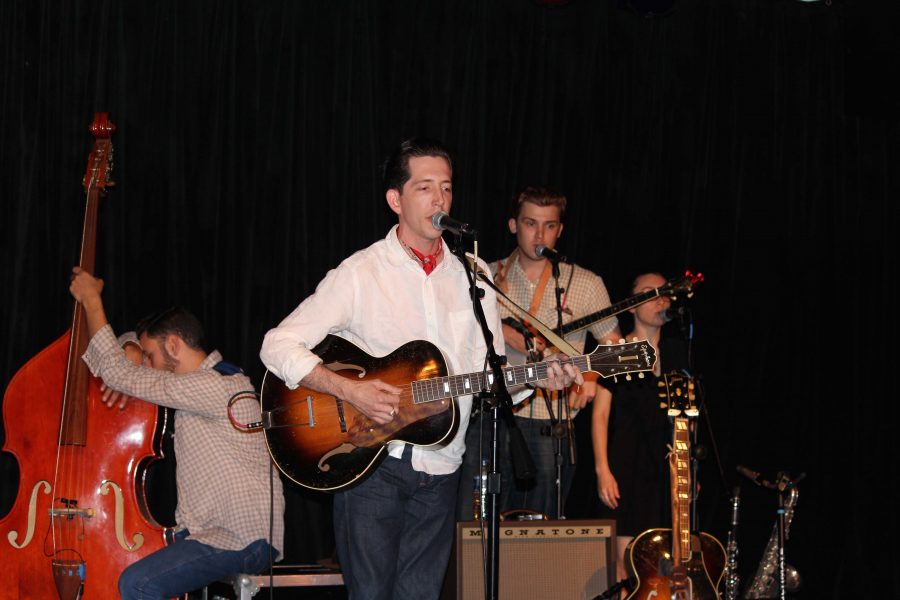 On Thursday, July 2, Progressive Torch and Twang hosts Daniel Rayzel and AJ Moser made a trip to Ann Arbor to catch Pokey LaFarge at The Ark. Along with a review from each host, you can find a handful of photos from their exclusive access to soundcheck below.

We’ve been spinning Pokey LaFarge’s latest album, Something in the Water, on Torch and Twang for months, and it’s bound to become one of my favorite releases of 2015. There was no doubt in my mind that I had to catch LaFarge as soon as he swung by next.

LaFarge commanded The Ark like he stole it from Noah, with a captivating 90-minute set at his disposal. The band ripped and roared through raucous pieces like “Knockin’ The Dust Of The Rust Belt Tonight” and “Central Time,” while delicately handling softer pieces like “When Did You Leave Heaven.” Every member of the band contributed vocals, showcasing their variety of skills and tricks that allow them to play such an eclectic mix of tunes.

Throughout the show, LaFarge remained charismatic and charming to his audience, including a dedication of two songs to the “Michigander Women” and even bending into the crowd to whip away at his guitar right into the faces of front row attendees.

Near the end of the show, LaFarge came on for the first of his encore pieces to do a solo acoustic piece, “Far Away,” in which the following exchange occurred:

LaFarge singing: “Where have all the good girls gone?”

LaFarge, stifling laughter: “Was there ever one? Well, apparently!”

A crowd full of strangers left as friends that night, with attendees whistling and humming tunes, or perhaps even having trouble letting the day slip away, such as myself…

When you can't get to sleep because you're still thinking about the stellar @PokeyLaFarge concert at the @annarborark you were just at.

Something about LaFarge’s clothes and music harkens back to simpler Midwestern style, a style that brought together the third-shift nurses, the heart-broken poets, and the wide-eyed students – a style that graced The Ark on Thursday night.

I was admittedly apprehensive to see Pokey LaFarge perform live, if just to shatter the illusion that the music had been perfectly preserved in a time capsule from the early 20th century. However, to my delight, the authentic classic folk sound carried by the band translates perfectly into a live setting and is even amplified by the contemporary energy and attitude of the instrumentalists.

The set at The Ark featured mostly tracks from the excellent album Something in the Water, but offered a great featuring of Pokey’s older material and a handful of excellent covers.

The real star of the show was the band’s obvious comfort performing together and their willingness to improvise and entertain. This is a band that has been making music together for a great deal of years and are clearly masters of their craft. Throughout the night we were treated to a number of in-depth harmonica, banjo, upright bass and trumpet breakdowns. Pokey, as a front man, was skilled at controlling a crowd and encouraging a constant intimate environment like the one we experienced.

The setlist culminated in what was seemingly a spontaneous free-form session from every member, highlighting their tight-knit understanding of folk music as a band and as a group of friends. For the duration of the 90-minute concert, the energy was at an exhilarating high and the entire room pulsed with an unmistakable positivity. You’d be hard pressed to find someone who left the show without tapping their feet and humming “What’s the Matter with the Mill,” infected with a post-show jubilee that is exactly what I hope for when heading out for an evening of live music.

Consider me a lifelong @PokeyLaFarge fan, will never miss a show when they return to the @annarborark or anywhere in Michigan!

“My Window Faces the South”

“Knockin’ the Dust Off the Rust Belt Tonight”

“When Did You Leave Heaven”

“Wanna Be Your Man”

“Something in the Water”

“What’s the Matter with the Mill?”