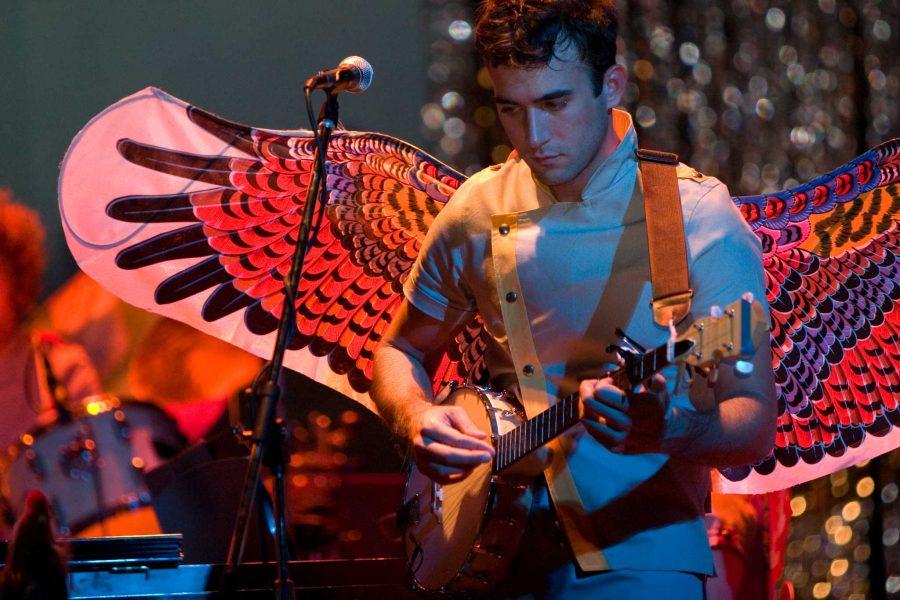 The first time I heard Sufjan Stevens I was 14 years old, sitting on the floor of a bus riding to a beach in northern Michigan with my summer camp. When my counselor started Sufjan’s “Michigan” album on the subpar, portable speakers I was quite unimpressed. Needless to say, my opinion has drastically changed since that moment five years ago that seemed insignificant, but is now incredibly cherished.

[su_pullquote]”I felt as if I could have very likely been up on stage, being serenaded privately.”[/su_pullquote]Because of my great irresponsibility, I neglected to get tickets to Sufjan’s Detroit show on April 27 before they sold out. Devastated, but determined, I somehow ended up winning a pair of tickets from GoombaS Pizza by sharing a Facebook status. I found someone to drag along with me and my dream slowly materialized in front of me.

The show was seated and I was so far away from the stage I could clearly make out the paneling on the wall behind me at the very back of the venue. However, the experience was nothing short of immersive. Even the older intoxicated men talking loudly behind me could not hinder or distract me from the beauty of the experience. I felt as if I could have very likely been up on stage, being serenaded privately.

The concert was divided into two distinct sections. Stevens started by playing straight through his newest album Carrie & Lowell, written about his estranged mother’s recent death and the fond, but confusing memories of his fleeting childhood with her and his step dad. The album divulges his deep sadness of missing out on so much time with her, as well as his complacently in their relationship and the various addictions and problems she battled before leaving Sufjan with his father.[su_pullquote align=”right”]”The content was so private you almost feel guilty witnessing it, but that raw quality is what makes it so valuable.”[/su_pullquote]

The visuals showed actual home videos from his childhood using dreamy, low quality film. Filled with nostalgia, this brought my first memory of hearing Sufjan to life. The content was so private you almost feel guilty witnessing it, but that raw quality is what makes it so valuable. This portion was exceedingly intimate, with Sufjan’s voice cracking on the last lyrics of “Eugene”. This album was his closure, his diary and his therapist and seeing it come to life on stage was an experience unlike anything else.

He played the song titled after the album and as it came to an end he began to speak for the first time since walking on stage. Suddenly, the third wall is broken and Sufjan goes from sullen to extremely personable. He rambles with little direction about growing up in Detroit and moving around frequently throughout his childhood. This makes the show more like listening to a friend recall their childhood than the formal performance it previously was. The second portion of the show was a huge change of pace.

He stopped talking and began to play again, but seemed more comfortable and relaxed. He played primarily songs from his “Illinois” and “Michigan” albums, surprising the audience by playing “Casimir Pulaski Day” for the first time all tour at the start of his encore.

With the last few songs, the intros and outros were extended helping the audience to notice the intricacy in them in a way you can not hear on the albums.