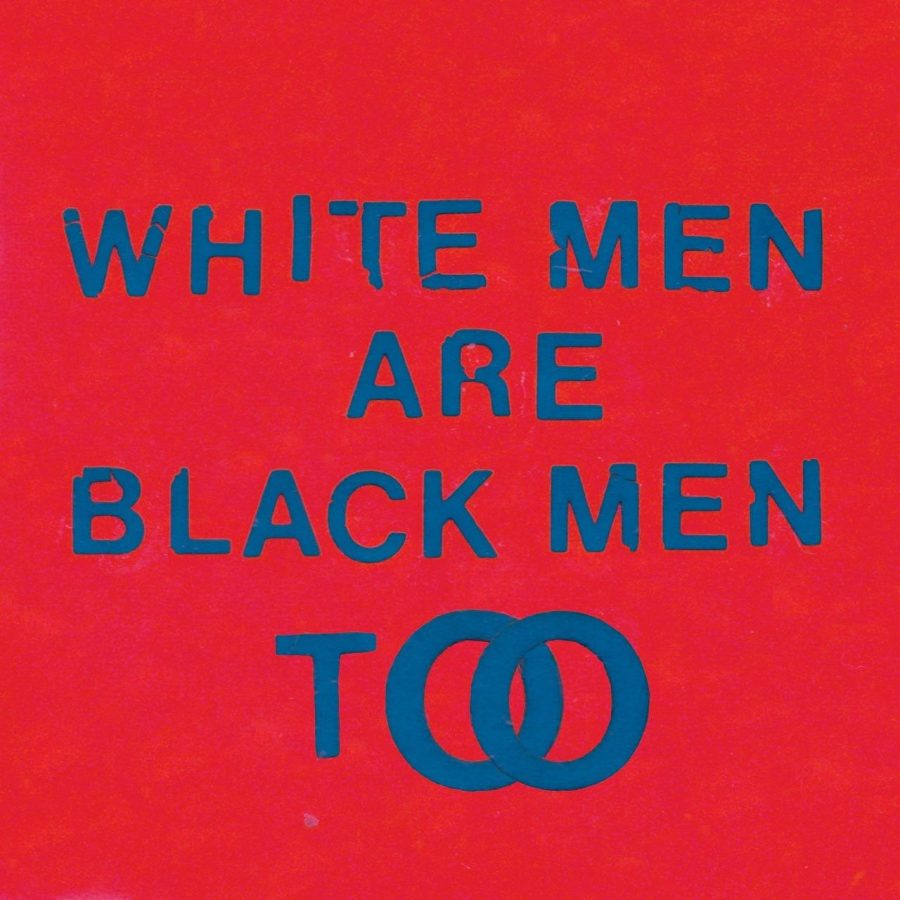 What is the old aphorism about judging a piece of work by its cover? Mostly attributed to books, music is often discriminated against due to jacket art, the genre, or even the album title.

Dear listener, if the subversive sentiments contained within the Scottish hip hop trio Young Fathers’ album title make you avoid the record, you seriously need to expand your comfort zone. Yes, contemporary social issues inform American listeners that the following album may contain some uncomfortable subject matters, but ignoring media that makes one squeamish effectively keeps the person in their insular bubble. Pop the bubble, absorb the diverse experiences of outsider groups, and start with White Men are Black Men Too.

[su_pullquote]”Pop the bubble, absorb the diverse experiences of outsider groups, and start with White Men are Black Men Too.”[/su_pullquote]Young Fathers’ lo-fi modus operandi emerges on the first track, “Still Running”, a bass-led alternative hip hop romp. The instrumentation actually simulates the act of running, with swift drum and piano percussion and upbeat lyricism. Self-produced and edited, Young Fathers overturn not only the sound of their previous release, Dead, but also the genre of alternative hip hop itself. Whether one is listening to the underground experimentation of Death Grips or Tyler, The Creator’s quirky flow, the overarching ‘alternative’ label looms inconspicuously.

Young Fathers technically fall under this genre umbrella, but instead of employing aspects of irreverence and insanity, they bring soul and R&B to the table. Nitpicking further, musicologists will often staple the hipster soul genre of PBR&B to White Men are Black Men Too, but like any unorthodox band, labeling is quite difficult.

[su_pullquote align=”right”]”…with some songs never breaking the three minute mark; therefore, it is easy to find oneself revisiting the album often, perhaps even with back-to-back listens.”[/su_pullquote]All three members of the band contribute vocals in their own unique Scottish accents, which sometimes sounds enticingly like an acid house redux of The Proclaimers. As evident on the second song, “Shame”, each individual bandmate provides a special inflection on the subject matter. The first verse features blues-tinged enunciations over fuzzy bass and electric guitar, whereas the next verse repeats the same lyrics, but with a more abrasive vocal style. This spoken change of mood allows Young Fathers to manipulate their narrative dynamic on the fly, disseminating themes of struggle, youth, humor, and rebellion effectively in select songs. Tracks like “Sirens” and “27” have the band soulfully crooning over floating electronica, and then flipping the script within seconds to portray an underlying sadness and anger. These emotions permeate each track on the album and certainly require multiple listens to fully comprehend.

White Men are Black Men Too runs at a fun-size 38 minutes, with some songs never breaking the three minute mark; therefore, it is easy to find oneself revisiting the album often, perhaps even with back-to-back listens.

Young Fathers know how to write catchy tunes, and of the 12 tracks on White Men are Black Men Too, numerous foot-tapping and danceable selections are peppered throughout. The trouble with the band’s brisk album is the noticeable low points within songs. Young Fathers’ lo-fi aesthetic works very well, even though it does not always add much in terms of sonic diversity; however, musical phrases within certain tracks lack appeal entirely. Even though the vocals do much of the symbolic heavy lifting, the chorus of “Sirens, sirens, sirens” on the eponymous track is obnoxious and some of the themes of disenfranchisement on “Old Rock n Roll” sound forced.

[su_pullquote]”Aurally diverting from their debut album’s unique delivery, Young Fathers shuffle into funkier lo-fi territories.”[/su_pullquote]In terms of replayability, the track “Feasting” can be disregarded entirely, which languidly obstructs the smooth transition between the sublime “Shame” and “27”. But, do not be too trigger-happy with the skip button: the weak moments in some tracks are often fixed with healthy doses of soul and socially-conscious groove.

White Men are Black Men Too stands on its own as an easily-consumable and solid alternative hip hop project; moreover, the great singles packed within are addicting and should find themselves on repeat on radio stations nationwide.

Setting the less-than-stellar moments aside, White Men are Black Men Too also serves as an insight into ethno-political issues from a European perspective. What the listener finds is that we are all in this global community together and one particular social group should never be burdened solely with ubiquitous struggles. And, of course, we all share the compulsion to sway and groove to this great album.

White Men are Black Men Too was released on April 6 on Big Dada Recordings.