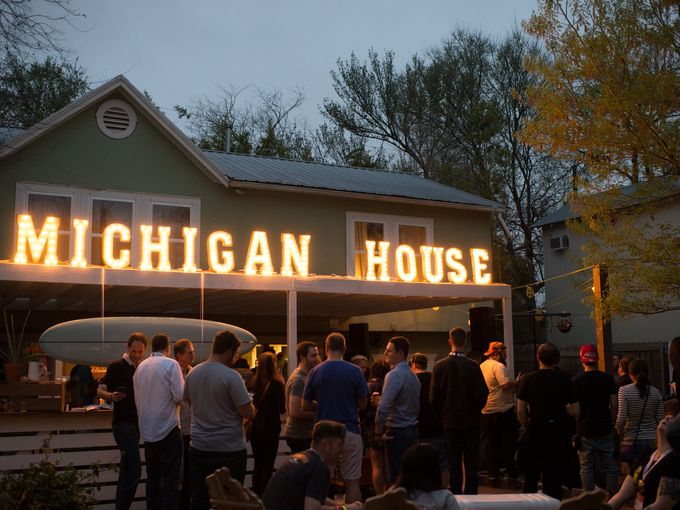 Last week in Austin, Texas from March 13-22 South by Southwest rolled into the city. Each mid-March the festival takes over the city to host a plethora of interactive conferences as well as a film and music festival. The events held throughout the days of SXSW involve anything from panels on emerging technologies, to film debuts of upcoming indie and mainstream movies, to concerts from the top emerging artists.  Overall, SXSW serves as an introduction for many artists to share their ideas with any and all people willing to listen. But this year the festival was particularly special for all of us from the Great Lakes state because, thanks to the Michigan House, part of the focus of the festival was turned back to the Midwest.

About a mile from the festivities being held at the Austin Convention Center sits a three-bedroom rental house that served as a home away from home for the state’s “hard-earned style”. The house was transformed into a hub for all things Michigan and a point for native Michiganders to connect during the festival.

A main partner of the Michigan House at SXSW, Creative Many Michigan, declared on their website what their goals for the house were by creating it for this year’s South by SouthWest:

[su_quote url=”http://www.creativemany.org/event/creative-many-michigan-house-at-sxsw-2015/”]We need to be telling our stories and spreading the word. The Creative Many Michigan House at South By Southwest 2015 is a ripe opportunity to do just that at one of the most culturally dynamic locales available. Featuring four days of programming the Creative Many Michigan House will be the megaphone with which we spread the word. Outfitted in a curated collection of Michigan goods, wares and designs, the House itself will be a beacon to our hard-earned style and legacy of creativity. It will serve as a hub for Michigan’s attendees and as a billboard for its artists and designers. Most of all, the Creative Many Michigan House will be a statement that our reputation isn’t going anywhere.[/su_quote]

The two main partners for the creation of the house were Creative Many Michigan and Middle West. Creative Many Michigan is a statewide economic development organization focused on the mission to develop creative people, places and the economy for a competitive Michigan. Middle West is a non-profit advocacy group that creates pop-up environments for Michigan made products. In addition to the two main partners, the house was also supported by other major Michigan businesses and organizations including Meijer of west Michigan, Dan Gilberts’ Opportunity Detroit, the Michigan Film Office, Art Prize, Founders Brewing Co. and many others.

For the first night of the House opening, the Michigan hub threw a house party for 125 people that involved the consumption of Michigan drinks and food like Founders, Faygo, Detroit Distillery Liquors and Good People Popcorn. Entertainment for the night was provided by three Detroit music acts. The most well known of the three artists was Dale Earnhardt Jr. Jr. (We can probably guess that they ended their set with “We Almost Lost Detroit”). Two other Michigan based artists who are currently recording with the Detroit Institute of Music Education, Charity and MPV, also performed during the night.

Throughout the rest of the week the house accommodated four day’s worth of panel discussions, mixers and performances. On Friday, actor Ryan Gosling stopped by to talk about his Detroit-made movie debuting at the festival, “Lost River”.

With the house closing on Thursday, March 19, only time will tell if the reaction and interest in the first ever Creative Many Michigan House was strong enough during the festival to warrant it making a repeat appearance again in 2016.

“[The house] is kind of a toe in the water,” Jeanette Pierce of the Detroit Experience Factory said when speaking with The Detroit Free Press.

With the large amount of rebuilding and creative work being done in Michigan, one can only hope that the Michigan House will be present at SXSW for years to come to showcase all of the talent and ideas that come from the Great Lakes state.