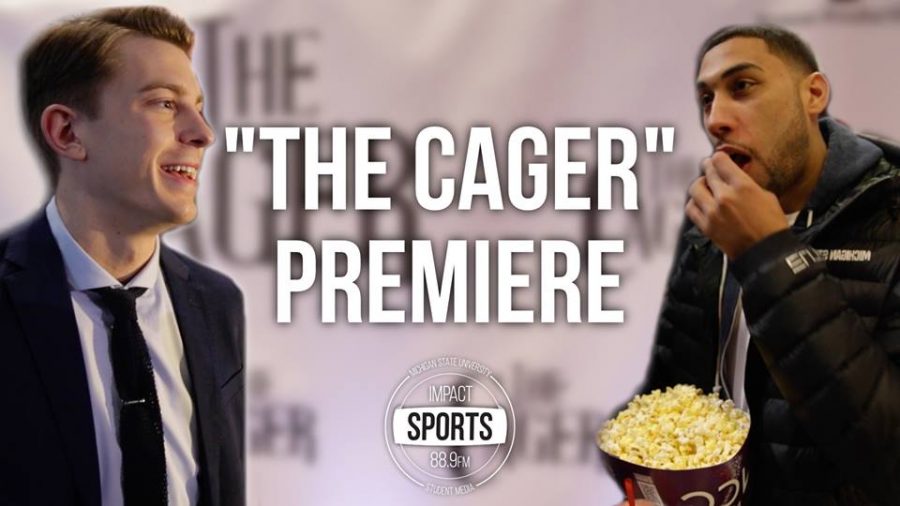 Almost exactly 24 hours after the Oscars concluded in Los Angeles, a young group of advantageous entrepreneurs held their own private red-carpet gala at NCG Eastwood Cinemas in Lansing to celebrate the completion of their own cinematic work. “The Cager”, a 25-minute film written and directed by current MSU basketball guard Keenan Wetzel and starring former MSU standout turned Los Angeles-based actor, Delvon Roe, was the centerpiece of Lansing’s own version of a Hollywood premiere.

The swank celebration and the short film tuned out to be more about the combined abilities of a whole cast and crew and the effort that it took to individually and locally produce a short film than about its two stars.

Everyone who followed through the months of the film’s uncertainty, financially backed it or attended the chic premiere wanted the stars to shine. Everyone wanted Wetzel to deliver an astonishing script and for Roe to exhibit his years in the Los Angeles acting scene. In the end, Wetzel’s script was ordinary and predictable, but to his credit, his first. Whereas, Roe, with his Los Angeles experience and the high praise Wetzel and executive producer Nicholas Stachurski spoke for months prior, was the weakest of the the three actors in the film. Roe felt stiff and unconvincing in the delivery of his lines and in his six-foot-eight body motions.

What unquestionably did shine was the cinematography and the production value of the film. I can almost guarantee that everyone who walked away from the premiere, film expert and not (me), walked away saying that at the very least, it was an undeniably exquisite and audacious looking film for the ages and experiences of the people involved.

This is only the beginning of the work for the young group as they plan to promote and submit the film to multiple film festivals across the Midwest and across the country. After Wetzel’s basketball season concludes this spring, he plans to begin writing his first feature length film and the group hopes to locally produce a full length film based out of the Lansing area once again.

If you want to see the film yourself, your next opportunity is this Friday at the Streetlight Series, a Detroit film and music showcase for exclusively Michigan filmmakers and musicians. To start, the group plans to submit the film to festivals and work their way to publicly showcasing it to a wider audience at some point on iTunes, Netflix and possibly the Big Ten Network.

Jonathan Yales is the Editorial Director of Impact Radio (not a professional film critic).