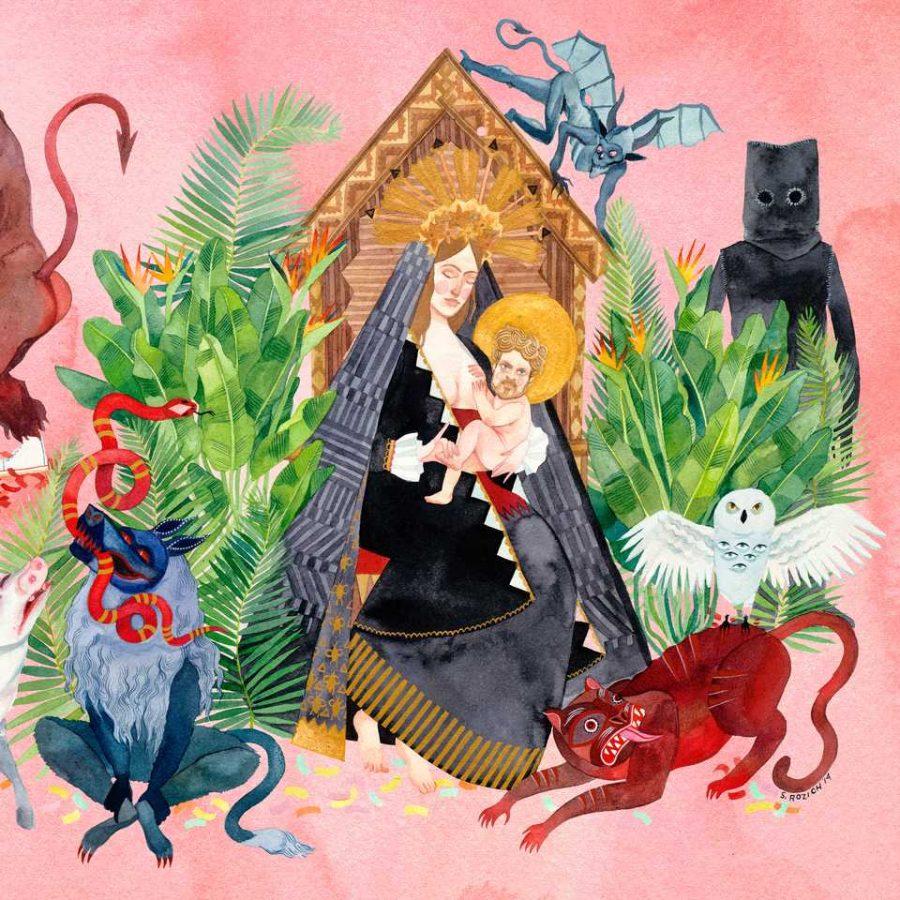 Josh Tillman has been a busy man, if not a tad bit indecisive. While nurturing a persistent solo artist career, the singer-songwriter has worked with acclaimed indie bands: the post-rock outfit Saxon Shore and the swirling baroque indie kings themselves, Fleet Foxes. After releasing the well-received 2012 solo effort Fear Fun under the pseudonym Father John Misty, Tillman had critics excitedly anticipating what the multi-instrumentalist would record next. Now, the wait is over, as Father John Misty drops the sanguinely titled album, I Love You, Honeybear.

The album begins with the dreamy ballad “I Love You, Honeybear”, an aural emulation of romantic songs from the 1970s. Tillman lovingly croons over cascading melodies of stringed instruments and piano chords, backed up by the rhythm-keeping acoustic guitar and drums. Some sonic elements of Tillman’s experience with Fleet Foxes are evident in the production of the eponymous track, incorporating a healthy amount of reverb to solidify the band’s folksy psychedelic sound.

The song also properly introduces the listener to the record’s dynamic compositional and lyrical themes, juxtaposing sweet symphonic harmonies with messages of misanthropy, schizophrenia, and irony. As Father John Misty builds up beautifully massive walls of sound a la Phil Spector, he interjects sardonic quips like “fuck the world” and “I’ve got my mother’s depression” to bring the listener back down to earth; Tillman’s lyrical delivery is swept up in a stream-of-consciousness, producing metaphors and narratives that Holden Caulfield would love. These mordant and slightly acerbic lyrics allow Tillman an unpredictable poetic license, encouraging the listener to pay attention to every word that he utters throughout all 11 tracks.

The diverse production throws the listener for a loop on the third song “True Affection”, initiating the track with a synthesizer riff straight out of the Alan Parsons Project playbook; however, this progressive rock influence fades quickly, and the rest of the song is pure neo-soul bliss. One may be tempted to classify Father John Misty in the genre of PBR&B, a tongue-in-cheek description of the hipster-ification of traditional rhythm and blues. The categorization certainly fits, as soft keyboard notes tango with relentless post-punk drum beats, laying the foundation for Tillman’s soaring falsetto. “True Affection” is a beautiful song, exemplifying the genre-bending range of I Love You, Honeybear. The album’s tone continues changing slightly in each song: the next track, “The Night Josh Tillman Came to Our Apartment”, injects the singer-songwriter into the lyrical narrative, regaling the listener with an annoying interaction he had with a woman who liberally uses the gerund ‘literally’. A plucked electric guitar accompanies the familiar warm strings as Tillman’s unreliable narrator berates the track’s human subjects with dark sarcasm. Suddenly, “The Ideal Husband” takes over as the true rocker of the album, mixing fuzz-heavy bass guitar, screaming violins, frantic organ, and surreal cacophonous post-rock climaxes. Without exaggeration, I Love You, Honeybear is the 2015 spiritual successor to Todd Rundgren’s A Wizard, A True Star, deftly weaving creative thematic material into a style-busting piece of art.

In closing out I Love You, Honeybear, we have Tillman exclaiming “Holy Shit”, as he lists off contentious current event topics over four guitar chords (‘ancient holy wars, dead religions, holocausts/new regimes, old ideas, that’s now myth, that’s now real’). It is a sequel of sorts to Billy Joel’s “We Didn’t Start the Fire” with newer subjects and additional profanity. Ostensibly, “Holy Shit” seeks to dismantle the political topics of the new millennium, but the track appears to have an autobiographical aspect to it, as Tillman examines religious violence through the prism of his fundamentalist Pentecostal upbringing. This gives way to the true satirical anthem of the year, “Bored in the USA”. A song that starts as a solo piano ballad, Father John transitions into a fully-fledged yet subtle assault on The American Dream, lambasting the blasé joys of first world comforts of prescription drugs, home loans, and Viagra. All the while, a post-production edit of sitcom-appropriate canned laughter follows Tillman’s observations, establishing the track as one of the most biting takes on American life in recent memory. I Love You, Honeybear is a remarkable sonic treat, utterly enjoyable and interesting. Listeners will be spinning this record all year long and probably counting down the days until Father John Misty surprises them again.

I Love You, Honeybear was released Feb. 10 by Sub Pop