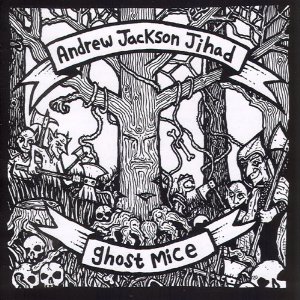 I was introduced to the folk/punk duo Ghost Mice with their 2007 Andrew Jackson Jihad split album after spending months delving into AJJ’s extensive discography. Ghost Mice is made up of Chris Johnston and Hannah Jones both former members of pop/punk bands before switching to folk for more venue options when touring. Hannah switched from bass guitar to violin and thus the band was born. Johnston and Jones both have small, pretty, innocent voices which are strange to listen to as they talk about child molesting priests, but the juxtaposition of themes leads to a confusing calming yet infuriating mood after listening. Their split also includes a song about D&D called Critical Hit (which I had happened to listen to hours after playing my first bout of Dungeons and Dragons) and a happy song called Cementville about kid gangs and befriending enemies, not to mention their closing song named Please Quit Smoking, Mom.