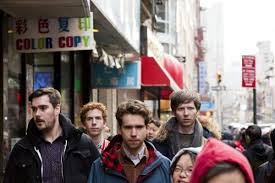 Sit or Spin was silly, weird and fun tonight with new tracks from Parquet Courts, Chromeo, Sharon Van Etten, and Little Dragon. The panel got into some garage tracks as well and we discussed what place they hated so much that they would name their band after it (reference to Sultan Bathery).

Losing to the Dark by La Sera : spin

Ghosts by You Me & Apollo : spin

Good To Me by Sultan Bathery : spin