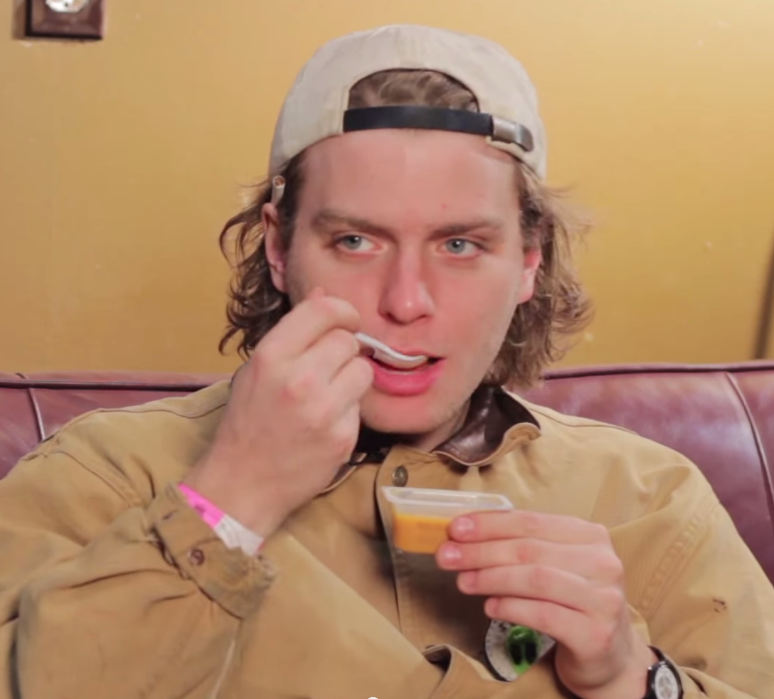 Did you see our baby food-filled interview with Mac DeMarco? Whether you did or not, you didn’t get the full story. Here are some segments from the crazy Q & A session with our favorite Canadian that didn’t quite make the cut.

Why do they sell french fries at Taco Bell in Canada?
Because most Taco Bells are Taco Bell/KFC…KFC does fries so it comes from KFC. I think it’s a great joint thing there.

Where in Canada has the best poutine?
Montreal…but poutine is never that good anyway.

Where is the missing Malaysian airplane?
I think that airplane is some Amelia Earhart shit, you know? I don’t think we’ll ever know. But uh, I don’t know. Maybe they…you know what? My bandmates are pretty convinced it’s aliens. Like an alien ship came down and sucked up the airplane. So, I’m gonna put my money over there for that.

What do you miss most when you’re on tour?
My girlfriend. Sleeping in. Feeling like there’s no pressure to get blackout drunk every night.

What do you do to relax when you’re off tour?
I just like to lay down. Watch movies. Smoke cigarettes. Eat sometimes. Drive.

When was the last time you called your mom?
I called her last week. I hadn’t talked to her in awhile because we were out of the country. So I said, “Hey mom,” and she said, “Hey, you’re going on tour?” I said, “Yep.” I guess she had just gone on a little trip too. She’s doing great.

Do you have a smart phone? What were the last few things you googled?
Some band called Railings on their bandcamp, we were looking up the cast of Toys with Robin Williams, and Google.com. Pretty interesting shit.

Do you ever put someone on your guest list just in case they decide to show up? Like a celebrity crush or something?
I’ve been thinking about putting Jennifer Lawrence on there.

How do you decide when you need to take a shower?
When I’m on tour I try to do it every day. When you’re drinking this much and sweating this much, you should probably do it, but I never get the chance. Right now I feel like I should shower, I think I smell probably like feces, but at home, I never shower. I guess the deciding factor is if you’re going to be in public or not, because if I’m just around my girlfriend, I don’t care if I smell like a dog. It’s fine.

What is the funkiest time you’ve had at a show?
We saw Nile Rodgers and Chic play in Australia. That was pretty funky.

How often do you spill?
Pretty often.

Is there anything else you want to add?
God bless you. Have a great evening. Thanks for watching. Peace out. I’d like to thank Obama and Jesus Christ.