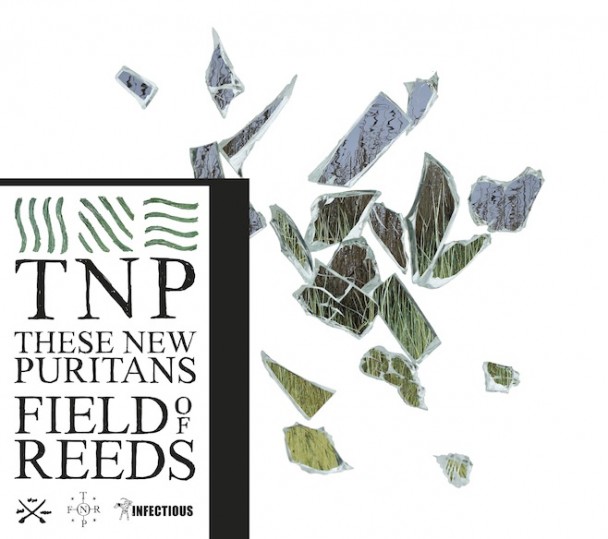 Experimentation within popular music leads artists to seek influence from all manner of diverse musical forms with classical music in particular being one of pop’s primary flirtations. Embellishment of neoclassicism in particular has led to successful artistic endeavors such as Talk Talk’s beautifully realized 1998 classic ‘Spirit Of Eden’ yet during the 00’s it became cliché for the large wave of indie guitar bands to include string sections on there indulgent sophomore LPs.

However an interesting proposition comes in the form of a band who began as a 00s indie guitar band yet over the course of three albums transitioned into being essentially an entirely neo-classical ensemble; ‘Field of Reeds’ is the third album from Southend-On-Sea trio ‘These New Puritans’, who’s latest opus perfectly encapsulates the band’s staggering ambition and boundless experimentation.

The band’s development from the guitar-orientated Aphex-Twin-influenced intellectualism of debut album ‘Beat Pyramid’ to ‘Hidden’ involved the band redefining their sound completely; lead singer and songwriter Jack Barnett learned classical notation over the course of three months, such that he could compose the album’s orchestral arrangements whilst also implementing bizarre innovations ranging from using Japanese Taiko drums, covering 17th century poetry and of course sonically simulating human skulls being crushed through smashing a melon and cream-crackers with an enormous mallet.

‘Field of Reeds’ is an immensely ambitious album that’s as technically accomplished as it is creatively. The original trio of Thomas Hein and the Barnett twins (Jack and George, the later being the drummer who incidentally modelled for Gucci and Burberry prior to the production of the band’s debut) employed over thirty session musicians to perform their music with the addition of composer Andres de Ridder who has worked diversely with multiple orchestras including the BBC Symphony Orchestra and the Philharmonia Orchestra as well as the Gorillaz on ‘Plastic Beach’.

Whilst ‘Hidden’s compositions veered heavily towards avante-garde classical with concentrations on instruments such as bassoons and oboes, “Field of Reeds’ makes an even more complete transition to classical music with equally fascinating flourishes of innovation such as the induction of the magnetic resonator piano; an instrument engineered by University of London professor Andrew McPherson to electronically shape the pure acoustic sound of a grand piano thus augmenting the pianist’s control of the sound. Barnett’s eclectic ensemble features the likes of bass profundo Adrian Peacock (the lowest voice in the British Isles), Portuguese jazz singer Elisa Rodrigues, Dutch contemporary classical composer Michael van der Aa and a harrier hawk that was recorded in studio until it began attacking their assistant engineer.

The album opens with the frail piano motif that pervades the obscurely titled ‘This Guy’s In Love With You’ (the song contains a warped field recording of an anonymous female singing a half remembered song that unbeknown to the band later turned out to be Burt Bacharach’s ‘This Guy’s In Love With You’. The Bacharach foundation bizarrely demanded These New Puritan’s original song title be changed). The song simulates being gently awoken from slumber as it grows and builds towards the emotive woodwind and brass accompaniments that forebode the album’s cryptic melancholic mood. The use of the haunting field recording within the opening track of half remembered words from a 60’s pop song suggests that, in a similar manner to it’s predecessor, the album deals thematically with memory through reoccurring motifs within song structure, melody and lyrical suggestion.

‘Fragment Two’ is easily one of the standout moments on the LP; a menacing dreamscape arranged such that each of the elements from the ominous opening acoustic piano notes, sad violin sections and sharp cymbals to Barnett’s oracular mutterings are realised with astonishing clarity and boldness. The sound and lyrics bridge the vast and fragile:
‘In between the reed nodes
Where the stars are hiding’.
The song plays out like a gleefully dark children’s story reverberating with the unexplainable fear created through impossible dreamlike imagery and unnerving suggestion:
‘In crushed glass by the train line
There is something there.’
The closing line of the song thematically introduces war:
‘I swam towards your ship
Like a missile guided by vague feelings’
in a way that relates the album to their previous work that strongly encompassed war.
These New Puritans have directly engaged with poetry in their work such as bizarrely covering Richard Garnett’s 1859 poem ‘Where Corals Lie’ on ‘Hidden’. This allows me to personally compare and suggest that if ‘Hidden’ embodies Wilfred Owen’s ‘Anthem For A Doomed Youth’ full or brutal alliteration (‘rifles rapid rattle’ almost sounds like the fast drum rolls on ‘Drum Courts- Where Corals Lie’) then ‘Field of Reeds’ could comparatively embody John McCrae’s ‘In Flanders Fields’; a quieter meditation on the horrors of war within an open landscape of beauty and mystery grown upon ground once saturated in blood and bone.

The longest song on the album is ‘V (Island Song)’ which takes the form of 9 minutes of dazzling evolution from Barnett’s austere delivery of prophetic riddles and indiscernible words to the eruption of the magnetic resonator piano and high hat accompaniment that eventually drifts into more mellowed hypnotic territory where the instruments echo and the choral vocals sound almost hymn like.

It could indeed be argued that some of the songs such as ‘Nothing Else’ and ‘Dream’ are arranged so barely that they are completely outshone by the album’s more grandiose moments. However, to criticise the album’s individual songs would be off the mark completely because the album insists on existing as a singular body of work that derives it’s impact from the cumulative effect of the songs played in the order they were intended.

‘Organ Ethereal’ is the album’s most significant divergence from complete neo-classicism with its electronica-tinged cyclical vibraphone hook that blossoms slowly through subtle phases of alteration reminiscent of Mike Oldfield’s ‘Tubular Bells’. The emotion builds through the repetitions and the song simulates the motion of rising till it reaches a towering aurora of gentle-sounding new-age experimentalism.

Ultimately ‘Field of Reeds’ is an album that demonstrates eradication of the distance between the artist and their art.

The albums meditation upon time and memory reflects These New Puritan’s astonishing creative ambition; time is explored in the recent past (the Falkland War that devastated 80’s Britian is suggested within the chilling line ‘Exocets towards Stanley’) yet also on the inconceivable scale from the millennia taken for islands to drift and form continents:
‘You asked if the islands, Would float away’
‘I said “Yes”’