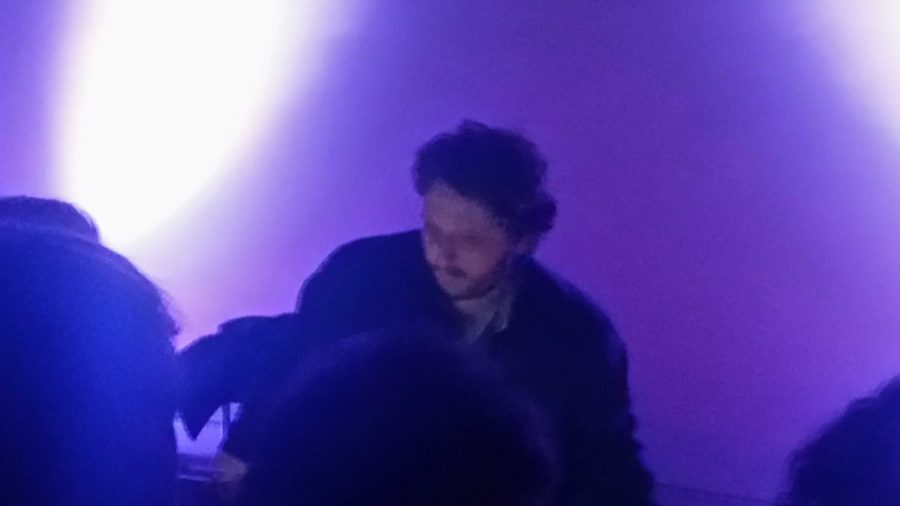 It had been a long time since I was last at a concert in Detroit and longer still since I had seen an electronic act in the area. For the most part, rap and metal were the two mainstays I’d see live in Metropolitan Detroit. So when I heard that experimental electronic artist Oneohtrix Point Never was not only performing in the city but doing so in a venue I had never been to, it was almost too quick the way I grabbed up tickets.

It wasn’t that I was worried that they’d sell out. As much as I’d like more people to appreciate the cut up and sampled rhythms that Oneohtrix has made famous on his 9 records so far, his presence only stands tall in the oft ignored subgenre of ambient electronica. For me, I wanted the tickets as a souvenir for a night of many firsts. It was the first concert I would be seeing in the actual city of Detroit, my first Oneohtrix show, the first time seeing the Museum of Contemporary Art Detroit (MOCAD) used as a venue, and the first time I took a shot of Serbian vodka from a guy covered in face tattoos who kept shouting “I LOVE THIS JAM” when the intermission music came on between acts.

For a building that’s basically a vacant warehouse, the MOCAD had surprisingly good acoustics. Now it may have been the setup itself or the fact that I was right up close to the speakers, but the bass came through booming and clear, any semblance of a melodic line (this was an electronic show after all) didn’t get drowned out, and the spaciness of the room that we were in allowed the finer atmospheric touches within the music to spread out and encapsulate the audience. Though this point was rather moot with the opening act, a French artist by the name of Rone, whose brand of IDM favored higher pitched and excitable dance lines punctuated by hard hitting percussion. Perhaps the best part about Rone was his ability to lull the crowd into swaying to one particular aspect of a song before switching gears abruptly and cranking the volume and groove up exponentially. If nothing else, it was an excellent opener that thinned the crowd out of the excessively drunk who would probably have knocked over Oneohtrix’s rig before actually listening to any of the buildups.

As for Oneohtrix himself, he put on a fantastic performance. Though only on for what felt like a very quick hour and ten minutes or so, the silently focused musician managed to cull quite a few hits from his newer records. Given the short time frame, most of the songs gravitated to the slightly more straightforward and dancehall/techno influenced outings by Oneohtrix. Much as it made for an exciting live performance, it was unfortunate that he didn’t treat the crowd to his eccentric sampling found on albums like Replica. I held out hope that he’d play “Sleep Dealer” or “Nassau” but alas it was to a night led mostly by the accessible yet still complex R Plus Seven. Perhaps the intriguing bit to his whole stage performance was how disconnected he appeared to be from the fact that he was doing a live show. Not to say this affected the performance in any way, he was spot on in his transitions and when altering volume, but his stone faced expression and methodical approach to his board gave off the impression that he was just as much at home there as he is in the studio. It’s rather impressive for an artist to be able to disassociate himself like that in such a setting. Whether that’s a boon or a hindrance I can’t say for sure. What I can say is that, for so many unknown variables, it was definitely a night that came together beautifully and one that makes a tiny ticket stub worth holding on to.