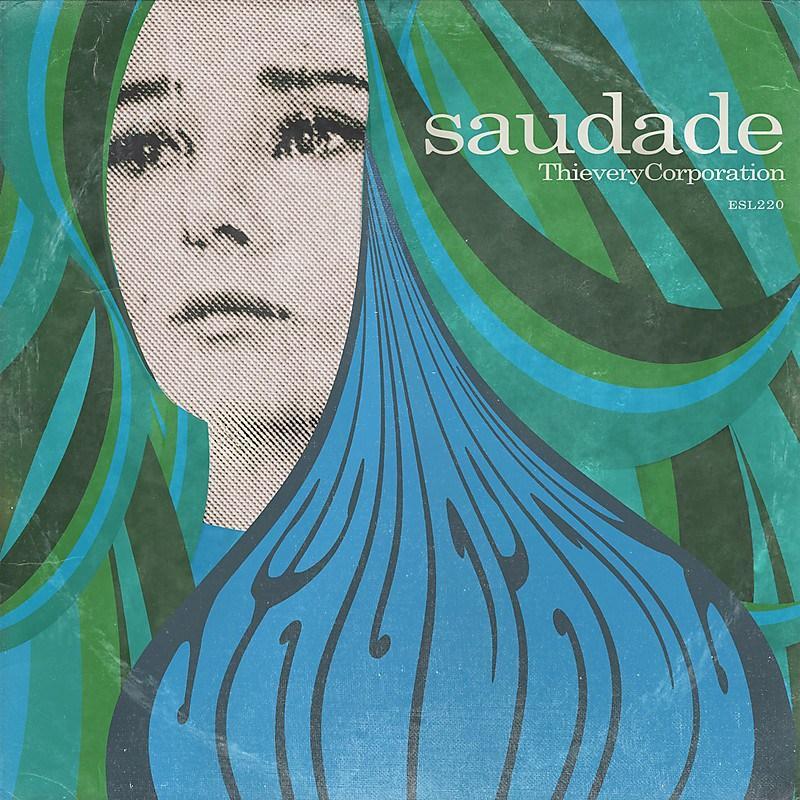 Tangential learning is a fascinating psychological phenomenon. The self-educating process that occurs when a concept is introduced to a person in an indirect manner, in this case with the title of Thievery Corporation’s new album, that then leads to a series of google searches and related articles that pulls one further and further into a rabbit hole of trivia. Upon receiving Saudade, the 7th full length record by DJ duo Rob Garza and Eric Hilton, I immediately set about finding out what “Saudade” translated to. As with quite a number of other emotionally inspired words, “saudade” has no direct English translation. It is a word meant to cover a specific emotion, “a deep emotional state of nostalgic or profound melancholic longing for an absent something or someone that one loves.” Its origins in Portuguese and Galician, it is a sensation greater than nostalgia or immediate grief, “it often carries a repressed knowledge that the object of longing may never return.”

This sense of vagrant wistfulness flows throughout the album. “Décollage” opens the record with a subdued mix of slightly up-tempo bossa nova and French lounge, carried along by Lou Lou Ghelichkani’s floating voice that conjures up images of  a dimly lit jazz bar, sparsely populated and the lingering scent of smoke left hanging in the air. From there it becomes a seamless transition to another location and continent as “Quem Me Leva’s” sparse violin sustains add a somber note to the upbeat groove of acoustic guitar and bongo drums, once again bringing to mind an isolated villa along a sunny South American coastline. Garza and Hilton’s songwriting approach on this album borrows heavily from traditional Brazilian samba and bossa nova, but that isn’t to say the album is uninspired, far from it. “Sola in Citta’s” quicker pace lends it a suspenseful edge that then elegantly ascends with shimmering synth chords and flute flourishes. The titular “Saudade” brushes along as the album’s dream-like interlude in which soft maracas provide the bed for walking guitar lines and percussion that sounds like dripping water echoing within a cave. The following “Claridad” continues in a similar theme, with Natalia Clavier’s sensual voice carrying a burgeoning sense of longing. In fact it’s the vocal elements on Saudade that generates the greatest sense of yearning on the album. Such a reliance on vocals isn’t entirely new for Thievery Corporation. In much the same way that Garza and Hilton looked back towards their musical roots for the instrumentation, Saudade takes a note from one of the group’s earlier albums, The Cosmic Game, and its experimentation with differing vocalists and their singing patterns.

The insistence on vocal performance can be best attributed to Eric Hilton, who describes the “warm, soulful, melancholic vocals” as an aspect of bossa nova that drew him towards the genre the most. It stands to reason than that bringing in Thievery Corp. favorites like Lou Lou Ghelichkani is a no-brainer, her inflections when she sings in both English and French on the album is not only alluring but vaguely hypnotic. Karina Zeviani’s softly glowing voice melds with the string arrangements, filling in the subtle spaces between the notes and giving songs like “Nos Dois” a contemplative air. The reserved lyrical expressionism of Elin Melgarejo works in contrast to the more exotic and lively samba of “Sola in Citta” and “Para Sempre,” creating a unique juxtaposition of moodiness that keeps these songs varied enough to not become full on appropriations of classic Brazilian music. More than anything, the conscious decision to focus so much on lyricism shows an effort by the band to branch out into new musical territory by playing with previously adhered to concepts, whether it being the roots of electronica itself or previous Thievery Corporation releases.

Saudade is at once a timeless and time-conscious album. The decision to use a Latin template for its musicianship gives the album an appeal across borders and across decades of musical tradition. But for Thievery Corporation, to release an album like this at this point in their career and with the way current electronica trends are moving, Saudade could only be released in this particular moment of musical scrutiny. In an era where further and further deviations of dub and dancehall are coming out of the woodwork, Garza and Hilton’s fascination with the sensation of saudade makes absolute sense. There is a tragic lack of appreciation for the cultural roots from which electronica builds from, an ignorance of the rhythm and soul that has spawned so many subgenres and variations of a familiar artistic base. As Hilton explains, “What we’re doing here is pretty traditional and timeless-sounding, and in that it’s completely contrarian.” Saudade is not a backward step for Thievery Corporation; it’s simply another direction the band has taken over their long and varied career, a reminiscing glance back to the weathered trail Garza and Hilton have taken to get to where they are today. It’s rare to see leading musicians pay humility to their success; it’s even rarer for a band to express a saddening desire to go back to basics.