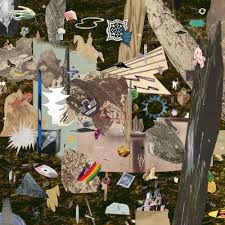 Estoile Naiant is the dense and perplexing full-length release from elusive London based electronic producer patten (always lower-case). patten’s musical output can be traced back to 2006 beginning with various deeply experimental CDR’s and highly limited EPs leading up to 2011’s GLAQJO XAACSSO LP released through No Pain In Pop. Recently signed to Warp records, he contributed sound installations to the “Tate x Warp” exhibition at Tate Britain in London alongside label-mates Oneohtrix Point Never and Hudson Mohawke in an exhibition that celebrated the prestigious label’s outstanding contribution to electronic music.

Estoile Naiant is a disorientating trip of an album that rarely settles or rests to breathe before spontaneously imploding and reconfiguring its pulsating electronic soundscapes. The maximal beats come and go over layers of harlequin texture and sampling all simultaneously twisting, echoing and colliding. The sounds take all manner of undefined shapes and overlap like some twirling kaleidoscopic puzzle that never stays still long enough to discern them. The splattering cyclical sonic paintings that patten creates could be compared to the more beat driven moments from Flying Lotus’ latest Until The Quiet Comes LP, yet patten’s work appears to be far less concerned with melody and instead buries melody deep within the shimmering wall of sound to hypnotize the listener into submission. “Agen” builds up through intricate accelerated beats, echoing vocal samples and gentle vaporwave tones that alter repetitively to suggest the infinite cyclical repetitions within nature and space time that consistently evolve and degrade through entropy and chaos. Yet occasional deterrence from the disorientation allows for vivid focus on the tracks individual elements; during the final minute of “Key Embedded” the song begins to deconstruct itself and all the individual layers can be heard with intense clarity.

The album’s sound could be described as progressive and futuristic whilst occasionally suggesting the microscopic world through it’s macroscopic intricacy, jittering chaotic fidgeting and organic sampling. Occasionally the albums sound borders into the dystopian; the hollow glacial synths in “Gold Arc” and “Drift” draw direct comparison to the works of Boards of Canada and particularly last years Tomorrow’s Harvest full of boundless sonic space and menace. Yet the dystopian sound within Estoile Naiant contrasts Boards of Canada’s faded widescreen sonic vistas because the relentless sound shifting within Estoile Naiant induces the feeling of jarring confinement instead of vast open space. When all of patten’s glitching beats are meshed so conflictingly, his work appears to show intense fascination on the minute scale rather than the effect of the resulting collection. The cumulative impact of the 10 tracks in unison is no-where near as impressive as the individual flourishes that occur at random intervals within in each track often lasting mere seconds.

Yet pattens obsession with what is near and in clear sight makes for incredibly lucid compositions that sound fully three dimensional in a way that allows for comparison to the production within last year’s bizarre yet outstanding mixtape ‘&&&&&’ released to acclaim by Arca following his production credit on Yeezus. For all the technical mastery evident in the construction of Estoile Naiant’s labyrinthian electronic onslaught, it remains so dense and uncompromisingly experimental that it leaves little space left to feel anything from within.